Ryan Giggs, our wizard of the dribbleby 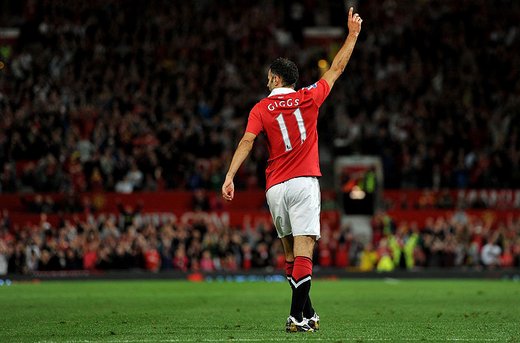 For almost two decades Ryan Giggs has made back and front page headlines as the Manchester United wing wizard and pin-up boy linked to a bevy of celebrity beauties. On the 20th anniversary of his Reds debut Darren Devine looks back at his conquests.

FROM his earliest beginnings it was clear to those who witnessed his talent they had stumbled across a youngster destined for greatness.

Gliding around the school playground with the ball at his feet, a tall and gangly Ryan Giggs would leave the other kids chasing shadows.

Come Wednesday, the Cardiff-born winger and former Wales captain, who is one of very few players to have spent their entire career at the same club, will have been doing the same thing to Premier League defenders for an impressive 20 years.

Now with a record 11 Premier League titles, four FA Cup winners’ medals, three League Cup and two UEFA Champions League titles already in the bag, Giggs, 37, is the most decorated player in the history of the English game.

And his appetite for glory is undiminished.

Giggs’ former PE teacher, Sue Kirk, was one of those given an early glimpse of the talent that has bestrode the English game like a colossus for two decades.

Mrs Kirk remembers the schoolboy Giggs at Moorside High School, in Swinton, Manchester, as a sportsman head and shoulders above the rest.

She said: “One of my earliest memories of him is that when he did the 400 metres he was at the finish line before the rest of them had done 200 metres.”

But the young Giggs impressed everyone he encountered with a modesty that belied his outrageous talent.

Mrs Kirk, a teacher at Moorside for 29 years, added: “He had a lot of friends at school and he still has the same ones now, which shows he hasn’t changed.”

She recalled how Giggs was torn between following in the footsteps of his rugby league playing dad Danny Wilson and sticking with his first love of football.

“Bob Mason, our other PE teacher, told him football would be the way to go.”

Giggs joined United after steward Harold Wood was tipped off about his talent by the reds-supporting mum of one of his Dean’s teammates. He started earning just £29.50 a week as a Manchester United apprentice. Today he earns more than £4m a year.

Away from football – though he is known for shying away from the limelight – the player has had more than his fair share of front-page headlines for bedding celebrity beauties.

He was linked with air hostess Lisa Susan Rys-Halska in 1996 and stripper Christina James told how they had sex four times in a single night.

He has been married to childhood friend Stacey Cooke since 2007 and the couple have two kids, Liberty, eight, and Zach, five.

Though Giggs now seems happily settled the couple have had their rough patches with reports he had problems putting his playboy days behind him. In March 2005 reports suggested 31-year-old Cooke had ordered him out of their £1m apartment after accusing him of bedding another woman. But they married two years later.

“I have Liberty and Zach now and I’m probably the most content with life as I have ever been and having a family plays a very important part in that,” the multi-millionaire said.

On the field, having recently signed a new one-year deal with United, Giggs seems as settled as he’s ever been.

Now, two decades on, despite everything he has achieved the player remains as focused as he was as a 17-year-old substitute making his debut in a 2-0 defeat to Everton at Old Trafford on March 2, 1991.

Giggs said: “I’m obviously very proud of everything I have achieved and when I’m older I will look back upon it with more of a sense of perspective. But for the time being the only thing that matters is the next trophy, not any in the past.”