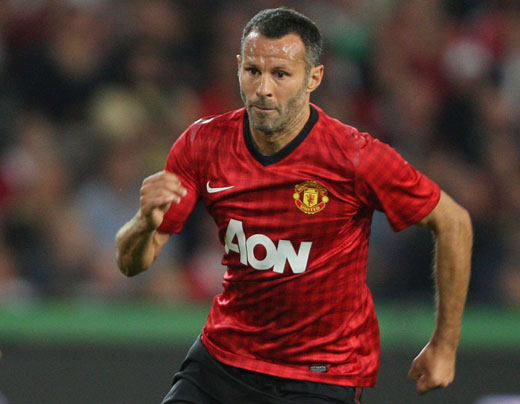 Manchester United and Nike have unveiled the new home kit for the 2012/13 campaign - a design that is inspired by the city's industrious past.

The shirt will feature the iconic gingham check pattern that hailed from Manchester's famous cotton mills, as displayed by Ryan Giggs.

In a recent interview during the kit launch, the 38-year-old spoke about life at Old Trafford, his never-ending desire to win more trophies, and the importance of the club's worldwide fan base.

Q: What do you think of the Manchester United home kit for next season?
A: I think the design looks great. It looks the part, and is a bit different from last year's kit. It has moved on like United - both on and off the pitch - always try and do. The players love it and I'm sure the fans will too.

Having toured for so many years in every part of the world we have fans. We recognise that and we're thankful for that. It's what sets United apart. The history within the city and the closeness of the fans and the players, and also around the world as well.

When we go on tour we like to meet the fans, whether it's in the Far East, South America, South Africa, or Scandinavia - we've got such a huge following around the world.

Q: How important is the Club's heritage?
A: Very important. Myself and the players at the moment, we want to create history. We are aware of everything United stands for and the manager makes you aware of that as soon as you come to the club.

We want to be talked about in 50 or 60 years time, just like [Denis] Law, [Bobby] Charlton and [George] Best are now.

Q: What else would you like to achieve at Manchester United?
A: Winning trophies is why you become a footballer. You want to win medals, trophies and competitions, and I've been lucky enough to win a lot in my career. But, I don't really look back - I always look forward.

It doesn't really mean a thing to me what I've won in the past, it only matters what I want to do in the future and that will continue.

I'll have long enough when I've finished playing to look back on what I've achieved and what I've won. But, whilst I'm still playing I'll just look forward.

Q: How important is it for young players to understand the Club's history?
A: I think it's very important that young players, whether they're coming from another country or from the same area, through the youth team, know the history and the heritage of Manchester United.

I obviously knew first hand what United is all about because I grew up in Salford and was always a fan. The history -whether it be winning trophies, playing attractive football or just great players - you need to be aware of it.

If you're around Old Trafford and involved in winning teams, you soon feel that history and how special it is to play for United. I quickly learned that coming to the club as a young player at 12 or 13, and now as an older, more experienced player, it's my job to make sure the young lads coming through know what Manchester United stands for.