Ryan Giggs: I am more suited to coaching in top leagues than at bottom clubs 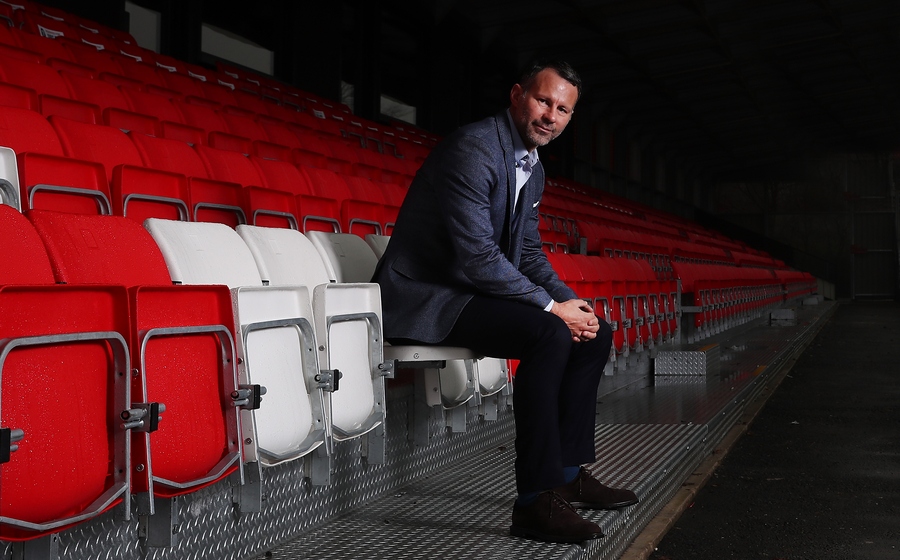 There are times when Ryan Giggs dares to wonder what might have been. He had been told that he was the next in line, groomed as Manchester United’s manager-in-waiting, but when the moment came, the demand was for revolution, not evolution.
“FA Cup final day last year,” he says, recalling the discovery, in the aftermath of victory over Crystal Palace at Wembley, that Louis van Gaal was to be moved on a year ahead of schedule and José Mourinho had been lined up to replace him. “It was the same time as Louis found out. I didn’t find out officially, but I knew. And even if José had wanted me, I knew that was me done at the club.”

We are sitting at the Peninsula Stadium, the revamped home of Salford City, the Vanarama National League North club that he co-owns with Paul Scholes, Nicky Butt, the Neville brothers and the Singaporean businessman Peter Lim. Giggs is promoting Class of ’92: Full Time, the Sky Sports documentary about the increasingly successful venture. More on that later, but the immediate agenda is about his managerial ambitions, frustrated at Old Trafford and elsewhere, about the vacancy he fancies (Wales) and the one he does not (Swansea City) and about the lingering feeling that while he could not begin to match Mourinho’s CV or trophy-winning pedigree, there is something missing from the modern-day United, left trailing, like everyone else, in Manchester City’s wake.
“I thought I was in with a shout,” Giggs says of his hopes of following Van Gaal as United’s manager. “But the club were in a difficult situation. They had fallen down the pecking order, so do they go for someone who — and it winds me up saying this — hasn’t got experience as a manager or do they go for a winner? They went for a winner, in José, a win-at-all-costs type of manager. Is José a typical Manchester United manager? Probably not, but United were in a situation of ‘How quickly can we get back to the top?’ I totally understand that. I just felt I could have brought continuity. I knew the players. I know what a Manchester United player looks like.”
Giggs does not name names, but he says that some of those signed in recent years do not meet that description. He cites Gabriel Jesus and Kylian Mbappé as young players that United should have signed — on his recommendation during his two years as assistant manager — but did not. He also identifies Rafael Da Silva, Jonny Evans and Danny Welbeck as players who were “United through and through” but were sold with indecent haste by Van Gaal. Mourinho would probably agree, having said similar of Welbeck and of Javier Hernández.
Giggs knew his face would not fit under Mourinho. “The meetings were with Ed [Woodward, the executive vice-chairman],” he says. “I listened to what he had to say, but deep down I knew my time was up. I was offered a job, but to go back down to the youth team wouldn’t have been right.”
So, after making more appearances and winning more medals than any other player in the club’s illustrious history, Giggs left Old Trafford, citing his wish to pursue his managerial ambitions. And 17 months later, he is still waiting, fully aware that, like so many other high-profile former players, he will be accused of trading on his reputation while unwilling to risk it by starting at the bottom of the ladder. He does not shy away from that. “I do feel I would be more suited to coaching at the top than coaching at the bottom,” he says.

We talk about the way that Barcelona and Real Madrid promoted Pep Guardiola and Zinédine Zidane respectively. Giggs is not claiming this means that he too could win two Champions League titles in his first job as a manager, but he feels that their experience demonstrates a difference between coaching at elite level and lower down. “It is a different job,” he says. “There are plenty of great players who haven’t made great managers, but we have just named two who have. I don’t have experience in the lower divisions. It’s not where I’ve worked in my career. I’ve spent my whole life in the Premier League — not just as a player but as a player-coach and assistant manager. I know now I wasn’t ready when I had those four games in charge at United [as caretaker manager after David Moyes left in 2014], but I’m a lot better qualified to manage now after those two years with Louis. That was a fantastic experience.”
So, given the English football landscape, where opportunities are scarce, patience is minimal and experience is en vogue again, what is the ideal first management job? Swansea, where there is a vacancy after they sacked Paul Clement on Wednesday? “Not for me,” he says.
Because they rejected him last season in favour of Bob Bradley? “It was the way they handled it,” he says. “I spoke to them a couple of times and then heard on Sky Sports three days later that they had appointed Bob Bradley. I don’t believe business should be done like that. If they had called — ‘Listen, we’ve gone with someone more experienced’ — then fine. But it didn’t happen like that.” Giggs thought he was in with a shout to replace Van Gaal as United manager
TIMES PHOTOGRAPHER MARC ASPLAND
What about the Wales job, for which he is in contention along with his former international team-mates Craig Bellamy and Carl Robinson? Would that be ideal? “I think it would be,” he says. “Wales is my country. International football is different. Gary Speed and Chris Coleman didn’t have much experience when they got the job. Sparky [Mark Hughes] didn’t have any. I know the players and the system. We’ve got a world-class player in Gareth Bale, some great players just beneath, some really good young players coming through, like [Ethan] Ampadu at Chelsea, [Ben] Woodburn at Liverpool. It would be a great job.”
In the meantime, matchdays are spent either at Old Trafford or at the Peninsula Stadium, where Salford are firmly on course for promotion to the Vanarama National League, one tier below the Football League. What is the ambition? “Football League,” he says. “Beyond that, obviously to go as high as possible, but we know how difficult that is.
“I’ve had loads of mates play for this club over the years and I’ve been down many times with 50 people on a wet Tuesday night. Now with our involvement, acquiring better players and developing the ground, it’s a totally different experience, but you approach it with that same feeling you had as a young fan. Before we went all-seater, I would stand behind the goal over there. I remember us going from 3-2 down to winning 4-3 and the lads sliding on their knees in front of me and I’m with my mates and it was just a brilliant feeling.”

"I heard on Sky I’d missed out. Business shouldn’t be done like that"
Giggs on the Swansea job

What kind of feeling does he get watching United these days? “In isolation, they’re doing OK,” he says. “But when you bring [Manchester] City into it, it’s more difficult because City have been so good. If we had beaten them at Old Trafford, it would have been interesting to see how City reacted. United could have kicked on from that too. But it didn’t happen.”
Was he surprised United were so cautious that day? “You have to be so careful,” he says. “Look what happened to Tottenham on Saturday [losing 4-1 to City]. As a fan, I would have liked to have seen United go for it. Not just for entertainment but to get the crowd behind us. As it was, City got into their rhythm early on, the crowd went quiet and it’s very hard to get that back.”
Do United’s traditions demand they play in a certain style? “You can’t just go gung-ho against every team, especially when I don’t think the players are outstanding like they have been in the past,” he says. “Sometimes you have to adapt. Ji-sung Park man-marked [Andrea] Pirlo at Old Trafford. But it has been disappointing in the big games this year. Liverpool was the killer because they weren’t in good form and United were flying. Then there was a lot of negativity and I don’t think we’ve recovered from that game.
“You want entertainment. It’s part of the history, part of the culture. You also want to win. As a United fan, you want both. That was the way I played. I wanted to entertain, beat men, excite the crowd. But do we have the players to do that? It’s horrible to say this, but you look at City and [David] Silva, [Kevin] De Bruyne, [Leroy] Sané, [Raheem] Sterling, Jesus . . . they’re brilliant to watch. Not only that, but their best players work so hard when they’ve not got the ball as well. Do United have that quality? It’s hard to say it, but probably not at the moment.”