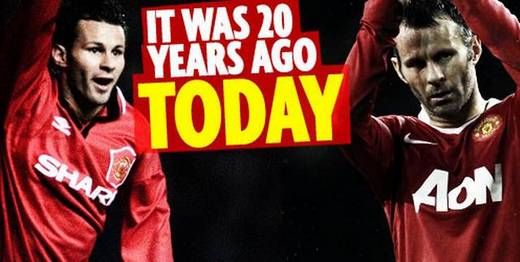 The most extraordinary aspect of the glittering career of Ryan Giggs is that, at the time of writing, on the eve of the 2009-10 season, it is still unfolding, almost 20 years after he made his Manchester United debut.

At the age of 35, and with his once tousled dark locks now flecked with grey and receding, Giggs should now be consigned to a place in United's illustrious history.

Instead, defying the ageing process and the emergence of several generations of younger players determined to take his place, he is very much a part of its burgeoning present.

Whenever a poll is conducted to discover the greatest player to grace the Premier League, the usual suspects find themselves vying for top spot: Eric Cantona, Alan Shearer, Thierry Henry, Roy Keane and Gianfranco Zola heading the list.

Giggs is frequently overlooked, yet none of those mentioned above were able to match his longevity at the highest level. Injury, ego, the ageing process or their own individual character flaws contributing to the end of their careers in England.

That Giggs has managed to outlast his contemporaries and remains as important to United now as he was in his pomp as a rampaging left winger, having redefined himself as a central midfielder, makes his achievements all the more spectacular.

Having beaten Sir Bobby Charlton's long-standing United appearances record in the 2007-08 season's Champions League triumph over Chelsea in Moscow, Giggs will reach the 800 mark before the end of the forthcoming campaign.

His goal against West Ham in February 2009 maintained his proud record of being the only player to score in every season since the Premier League was formed - 17 campaigns in all - and he is just three short of reaching the 150 milestone with United.

Although he has seen his first-team appearances rationed as he has got older, the former Wales international has proved his enduring worth to United this season with a series of match-winning performances.

When Chelsea came to Old Trafford on January 11th 2009, the consensus was that Sir Alex Ferguson would select Darren Fletcher - increasing impressive in big games - in midfield, to complement the elegant passing of Michael Carrick.

But Fergie pulled off a masterstroke by deploying Giggs in the middle. Giggs justified his selection with a display of ruthless assurance, as United strode to a 3-0 win which proved the beginning of the end for ex-Chelsea coach Luiz Felipe Scolari.

That majestic performance had many heralding Giggs as a long overdue recipient of this season's PFA and Footballer Writers' Player of the Year awards, given he has somehow been overlooked for both during his distinguished career.

"I told Ryan two weeks before the Chelsea match he'd be starting because that type of game was made for him," said Fergie in the wake of the 3-0 triumph. "His ability to hold the ball and beat a man in midfield is still second to none."

And Fergie praised the way Giggs has dedicated his life to football, claiming his sustained success was a fitting reward for his peerless professionalism.

Weekly yoga sessions, allied to his naturally lithe frame and a willingness to eschew the destructive temptations that bring a premature end to the careers of so many players, have all combined to keep Giggs at the very top.

"Ryan is a true professional of the game," said Fergie. "His lifestyle, the way he looks after himself and his desire to always want to win is a credit to him and an inspiration to any young kid who wants to become a footballer.

"He's like a young boy in the way he plays and although he wants to be involved in every game, he understands that by using his experience when it matters is a benefit to him and the team.

"Ryan has to be the prime example of what we're after in life. Someone who has never changed, someone who at every training session does his best and throughout his 20-year career has always excelled.

"It would be easy for him to be complacent after all he's achieved but he isn't and that speaks volumes of his character and explains why we wanted to extend his services with a new contract and use that experience."

That new contract will keep the former Wales international at United until 2010, when he is likely to end his playing days and take up a coaching role at Old Trafford, having already taken his UEFA badges.

Denis Irwin, who played with Giggs for more than a decade, said it was "frightening" his former United team-mate - who has won 10 Premier League titles, four FA Cups and two European Cups - was still excelling at the highest level.

"I was the one taken off when Ryan made his debut against Everton when he was 17," said Irwin. "It's frightening to think that was 1991 and he's still going strong in the first-team 18 years later.

"To play nearly 800 games over 18 years, in this day and age, is incredible. Ryan is lucky he hasn't had many bad injuries, but when you play that many games in the modern era it's some achievement.

"Don't forget, he was an out-and-out winger for the first 10 years of his career and he's had to reinvent himself in the last four or five seasons, playing in the middle as well as occasionally on the left and the right.

"His all-round game has just got better and better and his level of play is as high as ever. And he's fantastic to have in the dressing-room, because his experience is so important.

"What you get with Ryan is the full package. He's got everything. He's professional, he looks after himself and it's amazing but he just seems to get better and better."

Giggs was poached from the youth set-up of United's local rivals City and signed for Sir Alex Ferguson on his 14th birthday, heralding the start of an extraordinary 20-year association with the Red Devils which shows no signs of coming to an end.