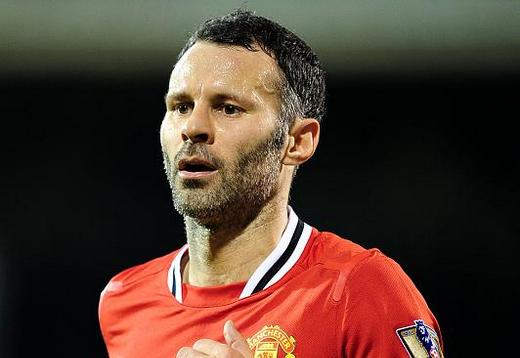 Golden oldie Ryan Giggs has set himself a target of playing 1000 games for Manchester United.

The 38-year-old has chalked up a record 904 appearances for the club since making his debut 22 years ago.

And he is adamant he will not make the same mistake as team-mate Paul Scholes — who retired last summer only to make a dramatic comeback in January.

Giggs said: "It's nice to have played 900 games for Manchester United — that's special.

"But I don't look too far into the future — I just try and enjoy the moment and do my best.

Giggs has played in 20 of United's 30 Premier League matches so far this season.

And the influence he and Scholes have had on the team has been a key factor in United overhauling neighbours City at the top of the Premier League.

But Giggs maintains a punishing fitness regime is the main reason he is still able to keep pace with more youthful team-mates like Phil Jones and Danny Welbeck.

He added: "Yoga has definitely helped me. It helps me with training because it gives me the flexibility and the strength to not only play games but train every day.

"I rarely miss a training session even if I do a little bit less than the younger players.

"You have to change your way of thinking. I was a quick player when I was younger but now I'm not as quick.

"So you have to use your intelligence and experience on the pitch to adapt your game and change your game — which I have done."

However, Giggs admits he does have one eye on what he will be doing once his playing days are over.

And he would be interested in following a similar path into management as the one Pep Guardiola took on his way to taking charge of Barcelona.

Speaking to Gazzetta Dello Sport, Giggs said: "At the moment I'm focused on playing but I will be involved in football afterwards.

"I've done my coaching badges and done all I can to prepare myself for life after football.

"Guardiola's done it at Barcelona but even he was the coach of their 'B' team for a couple of years.

"He had a little bit of experience managing so we'll have to see.

"My goal when I was younger was to play for Manchester United just once.

"But then after that you get greedy. You want to be in the team all the time. Then you want to score goals.

"Then you get really greedy — you want to win trophies and then you win more trophies.

"All these things have happened to me — I realised my dream and at 38 I'm still living my dream. You can't ask for much more."