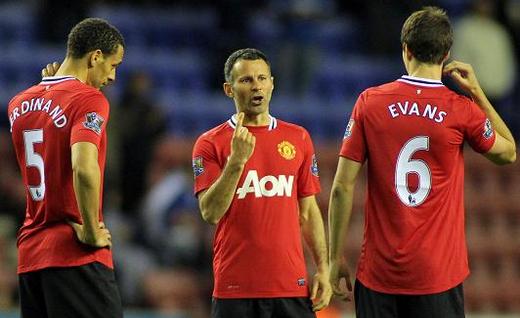 Ryan Giggs made no excuses for Manchester United's shock defeat by Wigan and has urged his team-mates to quickly respond to their Premier League title race wobble.

A 1-0 loss at the DW Stadium cut the defending champions' lead over Manchester City, who won comprehensively against West Brom, to five points with five games left to play.

Sir Alex Ferguson described the defeat as 'awful' and United were not at their best against Wigan as they went down to Shaun Maloney's second-half goal.

Welsh veteran Giggs has consequently urged United, who on 30th April face City at Etihad Stadium, to quickly bounce back ahead of Sunday's game at home to Aston Villa.

"We didn't perform," Giggs told MUTV at the DW Stadium. "For a start, our normal passing game wasn't as fluent and we kept giving the ball away.

"Obviously, you've got to give credit to Wigan. They put us under a lot of pressure, especially early on and credit to them as well.

"They worked hard, but that [being closed down] is something we come up against quite a bit, so it's not an excuse not to be able to handle that.

"We just didn't keep the ball like Manchester United usually do. I think we only had one or two shots on goal and that's also disappointing, so we have to look at the game and work on it and get ready for Sunday."

United felt they were disallowed a penalty when Maynor Figueroa appeared to handle a Phil Jones cross on a night of some controversy.

But Wigan's Victor Moses also had a header disallowed after Gary Caldwell was adjudged by match official Phil Dowd to have obstructed David de Gea.

"I didn't see it, but I think, from the corner before it, I heard the referee say to stay away from David and don't get in his way," Giggs said of the disallowed effort.

"I don't know if that's what it was disallowed for, putting David off, but obviously I'm pleased to see it ruled out."