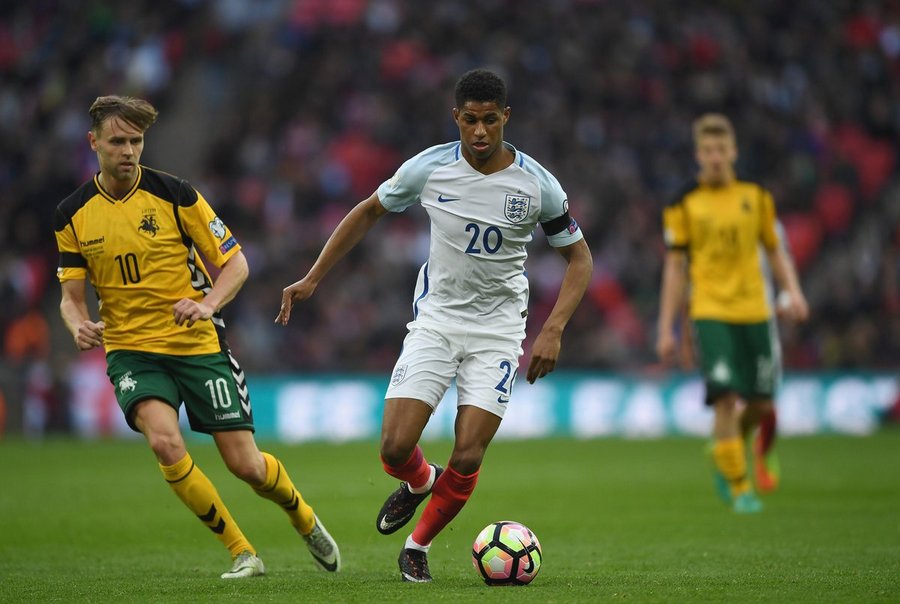 Ryan Giggs can take particular pride each time he sees his former pupil Marcus Rashford take to the field, but the Manchester United legend is now calling for the youngster to evolve his game.

Rashford entered the fray as a substitute during England's World Cup qualifying victory over Lithuania and looked lively from the off.

The 19-year-old produced a display that was far beyond his years, harrying the opposition defence and desperately seeking to get his name upon the score sheet.

And Giggs, who played a huge role in Rashford's development while a coach at United, has offered some advice to the youngster in order for him to take his game to the next level.

Speaking in the ITV studio following England's victory, Giggs said: 'He's a threat, he's a talent. The one thing I would say just at the moment, because he's not scoring, he just needs to mix his game up a little bit.

'More one-twos, more just laying it off, because at the moment he's getting the ball and he's taking players on - it's working - but you can't do that every time,' Giggs added.

The United icon went on to note the way Rashford needs to consider his moves so as to keep the opposition wondering, and subsequently not make himself too easy to suss out.

'Sometimes you've just got to keep the defender guessing. Just control, pass, lay it off and then the next time you run at him,' Giggs said.

'It's constantly cat and mouse and keep the defender guessing because he has got everything. He can run in behind, with and without the ball,' he added.

Rashford showed a healthy appetite to succeed in England's victory, going as far as getting booked for his troubles after visibly showing his frustration after missing a chance on goal. A decision later deemed to be hand-ball.

The United youngster has also recently admitted he wishes to feature in the Under 21 side at the European championships in Poland in the summer, despite now already being recognised as a senior England player.

Speaking earlier in the week Rashford said: ‘It is up to the coaching staff and managers to decide if I go. But if I do go, I’ll be approaching it with the same attitude as I do to the seniors. It is exciting.

'Getting tournament experience is massive, as long as everything is aiming towards the long-term objective, we obviously want to be successful and win trophies.

'So whatever we have to do to get to that, whether it is going down to gain the experience, everyone is happy to do that,' he added.