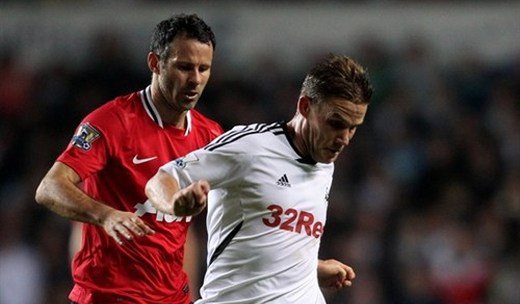 YOU’VE got to hand it to Ryan Giggs. His first match in his Welsh homeland since quitting international football four years ago, his 38th birthday just nine days away... and still he popped up with the one moment of inspiration which won the day for Manchester United.

This true legend of Welsh, British and indeed world football simply shows no sign of letting up and those who claimed many years ago he could play on in the Premier League until the age of 40 are looking more and more prophetic by the day.

The last time we saw Giggs appear in Wales was in his final appearance for his country against the Czech Republic at the Millennium Stadium back in June 2011.

He played well that afternoon, you may remember, and yesterday Giggs simply picked up from where he left off.

With Wayne Rooney, he was the biggest thorn in the side of Swansea City, inevitably at the hub of United’s best moves with precision passing and, when the opportunity arose, probing running.

The sort which set up Javier Hernandez’s early goal which decided matters at the Liberty Stadium. Hunting down three Swans men in possession, Giggs eventually pounced upon a loose pass by Rangel, raced forward at speed to create a yard of space and, having done that, put over a trademark pinpoint cross to give the Mexican his open-goal winner.

Much as they tried after that, and to be fair they did give it a right old go, there was no way back for the Swans.

Giggs is a different animal these days to the spring chicken who used to terrorise defenders down the left flank, his potent combination of pace, trickery, directness and deftness of touch making him impossible to stop back then.

The 2011 Giggs has slowed down, having to utilise know-how, experience and cunning and, approaching 40 years of age, it is inevitable he tires towards the ends of intense occasions like yesterday’s.

But when he was inevitably substituted for fresher legs in the 75th minute, Giggs was given a standing ovation... not just by the United visiting support, but by the Swans fans, too, who are fully appreciative of everything he has done for Welsh football down the years.

Record-breaker Ryan probably reckoned he had seen everything during his glittering 20 years at the top with United, but I bet this was the first time in the many hundreds of League matches he has played that he has been given such a rapturous ovation by the opposition support.

At first when running off, Giggs went into default mode by automatically turning to the United fans to applaud them for applauding his own efforts.

As he reached the side of the pitch, the crescendo of cheers from the Swans fans getting louder and louder, he somewhat humbly turned to sheepishly thank them as well.

The Swans supporters know a good footballer when they see one and they were fully aware of the impact Giggs had had on this game.

Sure, he gave the ball away a few times as the Swans midfield hustled and bustled around him. But by and large the oldest player on the pitch was calmness and composure personified, which is a lot more than can be said for some of his United team-mates who looked far less comfortable in possession as Rodgers’ men set about them. Looking at Giggs pinging the ball here, there and everywhere from his deeper and more central midfield role, I couldn’t help but wonder how his experience and expertise could help Gary Speed’s young Wales side in the looming World Cup campaign.

Just imagine, for one moment, Giggs pulling the strings next to Aaron Ramsey in the Welsh midfield and using that magical left foot to release the flying Gareth Bale and Craig Bellamy down the flanks.

But Speed has been down that route in trying to persuade Giggs to come out of international retirement. Sadly he is not for turning and, to be fair, it is the rest he got up in Manchester when Wales were beating Norway last weekend which enabled Giggs to turn up refreshed and fully fit at the Liberty last night following recent hamstring trouble.

It is just as well for United that Giggs provided that one early moment which set up Hernandez for his goal because after that, and in the second half in particular, the Swans really stamped their mark on proceedings.

Boss Brendan Rodgers said afterwards he was proud of his players and he was absolutely right to be so. Spurred on by a frenzied crowd creating passion, excitement and expectation, the Swans gave it a right old go against some world-class opponents.

But they lacked the creativity and class of a Giggs or Rooney in the final third of the pitch, someone capable of putting his foot on the ball in the heat of such a high-profile occasion and provide the one moment of magic which would have led to a goal.

But defeated though they were, the Swans can be pleased with their efforts over the course of these 90 minutes.

Much as they wanted to get something out of this game for their fans, in the greater scheme of things this iconic showdown against the Premier League champions was a shot to nothing for Rodgers and his men.

Most of us expected them to lose, as they will do more often than not against the leading lights in the Premier.

Anything gained from this one would have been a bonus. It is games against the likes of Blackburn and Fulham, each of whom the Swans meet very soon, which will determine whether Rodgers’ side are still in the Premier League come May.

Which, if they carry on playing like this, I believe they will be.

Not every team they meet in the remaining months of the season will contain a Giggs or Rooney.