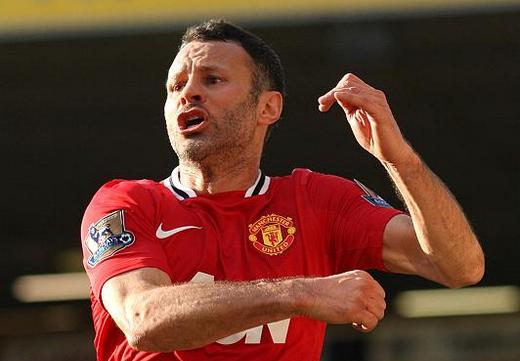 If Tottenham are going to win today then they better have a couple of goals in them because Manchester United will definitely score.

Nobody doubts Spurs are a good side but history will show you that they don't get enough results against the big teams — and I can't see that changing this afternoon.

Their mindset is to attack and that's fine against most teams but you can be asking for trouble if you leave yourself open against the likes of United.

And it's only a week since Spurs conceded five against Arsenal.

While they were being torn apart by their rivals, United were grabbing one of their trademark late victories at Norwich City.

People are going on about how odd it is for Paul Scholes and Ryan Giggs to be both on the scoresheet given their age but it didn't surprise me.

But it's probably not a great reflection on the game today that they can still be so influential.

Plenty of players have kept going into their late 30s but they've not had the impact that pair have.

The key to their success is hunger. It was the 90th minute at Carrow Road when Giggsy scored.

I've said before that United know how to win games and that was another example of it. But the celebrations were telling as well. Giggsy was ecstatic and he was mobbed by the other players.

I couldn't help be struck by the contrast between that and what I saw at Nottingham Forest on the Saturday.

Forest are a proud club fighting for their lives at the bottom of the Championship. Dexter Blackstock scored to put them 2-1 up away to Birmingham City and some of their players didn't even bother going over to congratulate him.

I couldn't believe it. I still get angry talking about it now. Do they not care? They looked like they couldn't be bothered running across. It's not as if they were 4-0 down and it was a consolation. It was an important goal.

Those players haven't won a medal between them and yet Giggsy and Scholesy, who have probably 15-20 each, are getting more excited by winning. Shouldn't it be the other way around?

That's why they're still going when they are aged 38 and 37.

Alex Ferguson clearly believes United have a better chance of winning if Giggs and Scholes are in the side and that's why they're likely to start at Spurs tomorrow.

It was going to be an open game anyway because of the way the two sides play but, because Scott Parker is suspended, it should be even more so.

Spurs got a bit of a tanking last week and they won't have had much time to put things right because of the international games.

That might be no bad thing. If you're a manager, you don't always want to see your players the day after a defeat like that so the time away might have done them good.

The week before I saw them draw at Stevenage and they were pretty poor and making excuses about the pitch. Stevenage have lost their two games since.

But I don't buy into the theory that the speculation over Harry Redknapp taking charge of England is affecting them.

You would have thought a court case would be more disruptive.

For Spurs, there are 12 games left, they're in third place and they've a game at home against United who are in second.

Forget your talking and your tweeting, this is what it is all about.

They shouldn't be thinking about anything else. They should be professional about it. United will be and that's why I expect them to win.