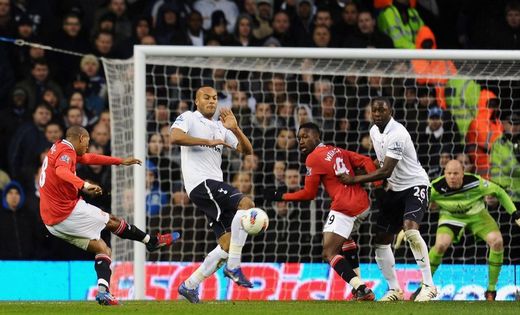 United emphatically cleared a major hurdle in the race for the Barclays Premier League title, posting a priceless victory over Tottenham at White Hart Lane to move within two points of the top of the table.

Wayne Rooney's header in first-half injury-time followed a half of dominance for the hosts, while Ashley Young's brace of brilliant finishes added an almost surreal layer of gloss to the scoreline for Sir Alex Ferguson's champions.

Tottenham were dealt a disservice by the full-time deficit, having bossed matters for the first hour of the game, but found themselves thwarted by a dogged display of resilience from David De Gea and his excellent defence.

Harry Redknapp will also point to a moment of controversy in the first period when Emmanuel Adebayor had a goal contentiously ruled out for handball, but his side were gradually worn down by United's clinical finishing and improved passing in the second half, and had only Jermain Defoe's late consolation goal to show for their considerable efforts.

The Reds welcomed back Rooney after a throat infection, but were without Chris Smalling, the victim of a head injury during England's midweek defeat to Holland. The hosts, meanwhile, were bereft of Gareth Bale (virus), Rafael van der Vaart (ankle) and Scott Parker, who served a one-match ban after picking up a pair of bookings in last weekend's defeat at Arsenal.

Nevertheless, both sides lined up with attacking formations, each spearheaded by two strikers. In the opening exchanges, each of the quartet chanced their arm in alternation. After Louis Saha's scuffed effort dribbled straight at De Gea, Danny Welbeck capped a surging run by blazing over from just outside the area, before Emmanuel Adebayor blasted a 25-yard effort over for the hosts.

The game's first effort of note was executed by Rooney, who curled a powerful effort into Brad Friedel's midriff after impressive approach play from Nani down the right flank. For all the attacking intent on show, however, the first 15 minutes of the game were bitty, with both sides guilty of sloppy distribution.

De Gea produced one such errant pass to inadvertantly forge Tottenham's first glaring opening, but the Spaniard atoned by dropping to his left and parrying away Adebayor's low, curling effort after he had been allowed to advance to the edge of the United area.

As the game's flow coagulated under heavy pressing from both sides, set pieces grew in significance. Spurs were given a free-kick from 25 yards, only for Youne Kaboul to drill just off-target, via a slight deflection, before Rooney hooked a low corner from Young goal-wards, but straight at Friedel. The deadlock remained in-tact, but wavered in an almighty scare for the Reds.

Aaron Lennon, hitherto well-shackled by Patrice Evra on the hosts' right flank, switched sides and motored past Phil Jones. His pull-back was well turned away by De Gea, but Saha's follow-up struck Adebayor on the chest and then the arm and, though the Togolese striker flicked home a finish, referee Martin Atkinson promptly halted play for handball.

The home support loudly bemoaned the decision, which could easily have gone unpunished, and their ire was only heightened when the champions moved into the lead in injury-time. Having been so disjointed in open play, it was fitting that a set-piece yielded reward, as Rooney escaped Kyle Walker to emphatically head home Young's wickedly-dipping corner.

Suitably stung by the unjust nature of their deficit, Spurs began the second period on the front foot. They would have drawn level soon after the restart, but for heroics from both De Gea and Jonny Evans; the Spaniard to instinctively block Jake Livermore's 20-yard effort which deflected off Saha, and the Northern Irishman for subsequently slashing the ball away from a packed goalmouth.

Benoit Assou-Ekotto then curled a 25-yard free-kick against the top of De Gea's crossbar as the hosts continued to boss matters. Yet, despite creaking under pressure at times, United's lead was doubled on the hour-mark - and again it came from alertness at a set-piece.

Jones' quick throw-in found Nani on the Tottenham byline, lurking behind Luka Modric. The Portuguese's cross was turned away from the goal-line by Walker, but Young dealt with the looping ball by brilliantly arrowing a volley inside the far post. Under the kosh but two goals up, Sir Alex Ferguson introduced Ryan Giggs for Scholes.

The Welshman was heavily involved as, incredibly, the Reds moved three goals clear eight minutes later. A sustained spell of passing and possession culminated in Evra slipping the ball to Young, who advanced on goal and exploited Kaboul's reluctance to meet him by curling a stunning, 25-yard effort high into Friedel's top corner.

For once, there would be no late drama; instead a 20-minute spell of dominant possession for the champions. One errant pass from Giggs gave Defoe the opportunity to advance on goal and thump a low, 25-yard effort past an unsighted De Gea, but United otherwise ran down the clock safe in the knowledge that, with 11 league games remaining and the home straight in sight, there will be few greater hurdles to clear.

David De Gea
Looked calm and composed throughout, and continued his run of making huge contributions at key moments in games. His stop from Livermore's deflected shot could have huge ramifications come May.

Phil Jones
Testament to the youngster's character that he overcame a shaky first half display - and a booking - to turn in a much improved defensive display during the second period.

Jonny Evans
Mountainous again, in keeping with his superb recent form. Made a key early tackle on Aaron Lennon to halt the winger's surging run, and vitally mopped up after De Gea had parried away Livermore's shot.

Rio Ferdinand
Like Evans, carried on where he left off in recent weeks. Read situations superbly and used all his savvy to stay one step ahead of Adebayor throughout the game.

Patrice Evra
Traditionally has been given stern examinations by Lennon, but set the tone early on by making sure he was first every ball and gave a solid defensive display throughout.

Nani
Drifted around and found possession in some neat pockets early on, and looked menacing whenever he had the ball. Showed great alertness to receive Jones' throw-in for Young's first goal.

Michael Carrick
Uncharacteristically unsure in possession at times during the first period, but upped his game hugely after the break and was bossing the midfield by full-time.

Paul Scholes
Like Carrick, struggled early on against the hectic pressing of Sandro and Livermore, but moved forward after the break and exerted greater influence before making way for Giggs.

Danny Welbeck
Nothing went right for the striker at Carrow Road last week, but he bounced back with an admirably energetic display, full of running and lively movement. Found few openings, but caused no end of trouble with his movement.

Wayne Rooney
Characterised United's display with a quiet first period, until his clinically-taken opener. Livened up after the break and oozed his trademark class by the time the final whistle went.

Ryan Giggs (on for Scholes, 61)
Slotted in seamlessly alongside Carrick in central midfield for 25 minutes, but will be annoyed at himself for gifting Defoe Spurs' late consolation.

Ji-sung Park (on for Nani, 79)
Had little time to impact on proceedings, but kept things neat and tidy, as was his remit.