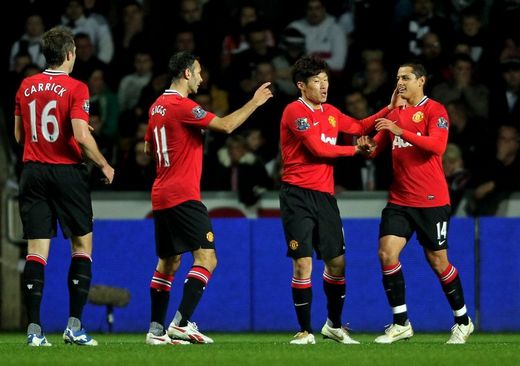 United remain hot on the heels of neighbours Manchester City after registering a first-ever win at Swansea City.

This was the first meeting between the two teams in 28 years with the Reds never having beaten the Welsh side on their own patch in eight previous attempts. Brendan Rodgers’ side were intent on maintaining that record and indeed this season’s unbeaten run at the Liberty Stadium, but Javier Hernandez’s 11th-minute strike proved decisive as Sir Alex’s men, who were professional in their play, rather than prolific, overcame a spirited display from the Swans.

With Manchester City eight points clear at the top of the table at kick-off, Sir Alex knew victory was imperative and he sent out a strong team with that very much in mind. There were three changes to the side that beat Sunderland with David De Gea returning in goal, Michael Carrick starting his first league game of the season and Ryan Giggs back in action in his native Wales and featuring in his first match for five weeks after a spell in the treatment room. And it was the Welshman who ensured the Reds got off to the perfect start on 11 minutes.

Angel Rangel dithered on the ball at the back and his attempted pass was easily cut out by Giggs. The midfielder powered into the area before sliding a low cross into the path of Javier Hernandez who side-footed home from close range to keep up his impressive run of goals away from home.

Swansea, who had come out of the blocks with real intent, remained buoyant despite the early blow and went close to restoring parity on 22 minutes; indeed, Scott Sinclair will still be wondering how he didn’t get his name on the scoresheet. Just after Patrice Evra had seen a low drive well held by Michel Vorm, the Swans' lone front man Danny Graham shrugged off a challenge at the other end to put Wayne Routledge in. His cross cannoned off Carrick and into the path of Sinclair who, with the goal gaping and De Gea struggling to get back in position, completely missed the ball from eight yards out.

The Reds, in relative control thereafter, set about trying to build on the 1-0 advantage. After Giggs had flashed a free-kick just wide nine minutes from the break, Hernandez found himself clear down the right but he over-hit his cross towards the onrushing Rooney and the chance was gone.

It was the Swans who had the first sight of goal after the restart. Joe Allen, brought on to replace Routledge, rolled the ball out to Sinclair who sent a powerful left-foot drive goalwards, but it was well parried by De Gea. Gary Monk then miscued a free header from the resulting corner.

The Swans continued to battle but De Gea and co. held firm. At the other end, Hernandez was always a threat on the break, while Rooney was involved in virtually all of United’s good play. Indeed, the England striker tried his luck from long range on 70 minutes, but Vorm claimed well.

With only one goal in it, the Swans continued to probe. Sinclair escaped the attentions of Rooney down the left and picked out Graham in the box. His shot was well blocked by Carrick, while Ashley Williams saw his follow-up effort cleared by Ferdinand.

With time almost up, the Reds went close to doubling the lead on three occasions in quick succession. First, Rooney chipped the ball onto the roof of the net, and then Jones, on one of his now renowned bursts forward, saw his low drive from inside the area deflected against the far post by Vorm. Finally, Nani sent a curling effort just wide.

United held out for a fifth consecutive victory in all competitions and ensured the team across town are far from out of sight in the league.

David De Gea
Showed safe handling on crosses and made a great save when called upon early in the second half to thwart Sinclair at the near post.

Phil Jones
A solid return to his day job for United at right-back, after two games in midfield for England. Was unlucky not to open his goalscoring account after hitting the post in the dying stages.

Nemanja Vidic
Courage and command summed up by a diving header to clear from Danny Graham’s boot at a second-half corner. A typically colossal display from the skipper.

Rio Ferdinand
Played to Vidic’s left and was in the right place at the right time on several occasions, not least when he denied Williams with the second of two blocks in quick succession as the Swans threatened to equalise.

Patrice Evra
Was tested by the pace of Nathan Dyer and took a blow in the face just before half-time which eventually forced him off soon after the restart.

Nani
Had a quiet game on the whole but almost iced his 25th birthday cake with virtually the last kick of the game, curling a shot just beyond the far post.

Michael Carrick
Made his first league start of 2011/12 and received special praise from the manager after the game following an immense performance. His passing was top-notch and he also made some brave tackles at key moments.

Ryan Giggs
Recalled to the eleven for the first time since the Anfield trip after a spell out injured, the Welshman ruthlessly punished Angel Rangel’s error to set up Hernandez’s winner. There was no romantic outcome for a direct free-kick however, as he bent his shot wide.

Ji-sung Park
Operated on the left flank and put in another solid shift in what was a decent team performance overall. Was on hand to provide cover defensively when needed.

Javier Hernandez
Away from home this season Chicha has had six shots on target and five have resulted in goals – that’s some going from Mexican. Was in the right place at the right time once more to slot home the winner.

Wayne Rooney
Like Jones, Wazza also reverted to a more familiar position, playing in behind Hernandez and providing the Mexican with some excellent service. Went close to netting himself with a chipped effort in the final minutes.

Substitutes
Fabio (for Evra, 51 mins)
Provided good energy down the left and, as always, enjoyed getting stuck into the action.

Darren Fletcher (for Giggs, 76 mins)
Brought on to sure up the midfield late on and went about his job with typical determination and desire.

Antonio Valencia (for Hernandez, 84 mins)
Looked sharp, and played a lovely pass through to Jones who went on to smack the woodwork.