Manchester United ground out a gritty, yet invaluable win over Sunderland to extend a record-breaking start to the Barclays Premier League season.

Robin van Persie's 27th-minute strike deflected off Phil Bardsley and Titus Bramble for the only goal of the game, making United the only team to win 25 of the first 30 games of a top flight season in England.

A mixed display from the Reds might have yielded more in a one-sided first period, but the relegation-threatened hosts improved markedly after the interval to keep United on the back foot for long periods.

Mindful of Monday’s looming FA Cup quarter-final replay at Chelsea, Sir Alex Ferguson made good his pre-match suggestion that he would chop and change his squad to absorb the rigours of a congested calendar.

Wayne Rooney, Rio Ferdinand, Ryan Giggs and Chicharito were omitted completely from the 18-man party, while Patrice Evra savoured the rare experience of starting the game on the bench.

That meant a second successive start for Alexander Büttner, with the Dutchman on the left side of a defence also comprising Rafael, Chris Smalling and Nemanja Vidic ahead of goalkeeper David De Gea. Michael Carrick partnered Anderson in central midfield, flanked by Antonio Valencia and Ashley Young, while Shinji Kagawa provided deep-lying support to van Persie in attack.

The Dutchman, looking to curtail a comparatively barren run of form in front of goal, had the game’s first attempt on goal as his long-range header from a Rafael cross drifted comfortably to Simon Mignolet.

Though there was a nervy early moment for the visitors when De Gea’s scuffed clearance was mercifully mis-controlled by Danny Graham, the hosts were largely on the back foot during the opening exchanges.

Bardsley was penalised for handball on the very edge of his own area, only for Young to overhit his centre from the resulting free-kick, before Büttner’s solo run eventually culminated in his toe-poked effort being deflected away by Mignolet.

The Belgian was helpless, however, as United moved into the lead shortly before the half-hour mark. Van Persie picked up possession on the left flank and bought time while he sized up his options. Having decided to shoot, the Dutchman’s effort took an immediate nick off Bardsley, and was just starting to arc towards goal when it took a heavier touch off the thigh of Bramble and sped into the back of the net. 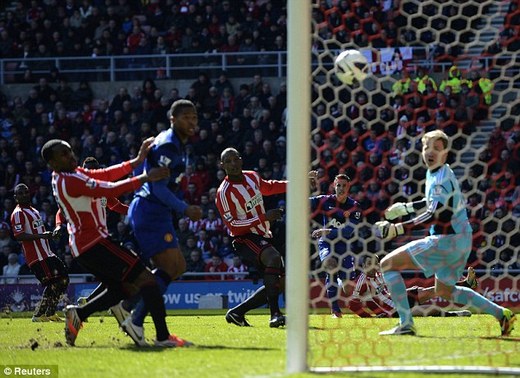 Van Persie wheeled away in delight, his seven-game search for a club goal potentially at an end, pending the next sitting of the Premier League’s Dubious Goals Panel. But to whom the glory belonged was a side issue; United were in front and a step closer to making history.

Sunderland’s supporters began to vent their frustration as United continued to tighten their grip on the game. Though Rafael made way for Jonny Evans, the Reds’ dominance was uninterrupted. Mignolet spectacularly caught a Young free-kick and clutched van Persie’s low, near-post effort, while only a heavy touch from Anderson spurned a delightful layoff from Kagawa.

Van Persie twice came close to doubling United’s tally in the closing moments of the half, first prompting Mignolet to tip over his fierce free-kick, then volleying over the bar after a sumptuous one-two with the superb Carrick.

Sunderland were fortunate that their tame first half showing had only been punished by a one-goal deficit, and Martin O’Neill’s players emerged for the second period clearly intent on committing to the cause; pushing greater numbers forward and charging into challenges.

Former Red John O’Shea was cautioned for a foul on van Persie, whose subsequent free-kick was deflected clear from a promising position, before the Dutchman also picked up a caution for a perceived high challenge on Craig Gardner.

The home support cranked up their own contribution in keeping with events on the pitch, and it took a superb diving clearance from Evans to stop Stephane Sessegnon from giving the hosts even more to shout about. From the subsequent corner, play was halted after an accidental clash of faces between De Gea and Vidic, but the Reds were undoubtedly rattled  by the hosts’ improvement.

Smalling, who had switched to right-back after the introduction of Evans, made a superb headed clearance as Graham steamed onto Adam Johnson’s cross, before the ex-Manchester City winger drilled a long-range effort wide of De Gea’s goal. For United, a rare forward raid culminated in Büttner’s cross being cleared by Bramble before Kagawa could apply a finish.

Bardsley volleyed off-target shortly after escaping with a booking for planting his studs on Büttner’s shin, before the Dutchman almost exacted revenge with a stinging right-footed effort which Mignolet tipped wide. Vidic planted a header wide from the ensuing corner as United increasingly pushed for a killer second goal.

Danny Welbeck was introduced in place of Kagawa and Anderson made way for Tom Cleverley, but United's hunt for a second goal was shelved in place of staying tight and falling back on a defensive fortitude rekindled in 2013.

The hosts' aerial approach was repelled superbly by Vidic, Evans, Smalling and Büttner, while De Gea was up to the task when Connor Wickham registered Sunderland's first shot on target in the 90th minute. Van Persie almost added a second goal with the final kick of the game, only for Mignolet to bravely block his effort.

There have been mightier displays from Sir Alex's side en route to making history, but the numbers drown out the superlatives on this occasion: 30 matches, 25 wins and a 15-point lead over Manchester City with eight games remaining this season.