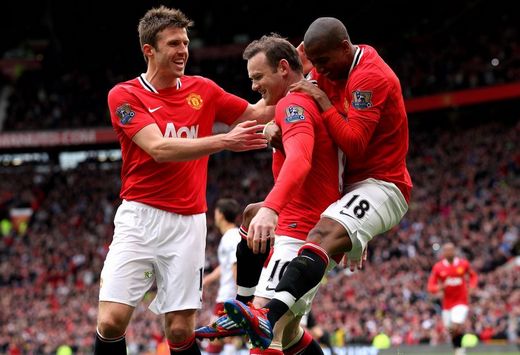 It was all about the response from United to the shock defeat at Wigan and Manchester City's thumping win at Norwich on Saturday. Sir Alex's players answered any questions regarding title credentials emphatically with Wayne Rooney, Danny Welbeck and substitute Nani amongst the goals in a match the leaders dominated from start to finish.

Rooney netted an early penalty after ex-Villan Ashley Young was fouled and scored his team's third when on the brink of being substituted. United scored at the end of both halves, through Welbeck and Nani, as the champions opened up a five-point lead again at the top with four games remaining.

The Reds immediately conceded a chance to Andreas Weimann, who forced a save out of David De Gea, but any thoughts of a hangover from Wednesday were soon dispelled. With only six minutes on the clock, Young tricked his way into the box and was tripped by Ciaran Clark with referee Mark Halsey pointing to the spot. Alex McLeish had warned his players not to make rash challenges on the former Villa winger but it wasn't heeded and Rooney camly added to his personal tally against Shay Given by sending the former Newcastle and Manchester City keeper the wrong way from the spot for his 30th goal of the season.

Some of United's technical play was of the highest calibre but the visitors defended manfully, putting bodies on the line with Eric Lichaj and James Collins blocking efforts from Welbeck. Rooney worked Given after a neat cut-back by Rafael but the visitors still carried a threat with Barry Bannan's free-kick headed wide by Clark.

Rooney screwed a header off target when Michael Carrick headed on a Young corner before Paul Scholes took centre stage. After trying to replicate his famous volley against Villa with a textbook strike that Given fielded, the evergreen midfielder then tried to re-enact his classic at Bradford by smashing Young's pinpoint corner wide. If either shot had ended up in the net, they would have brought the house down.

Stephen Ireland reminded United of Villa's threat on the break by bending a drive wide after Rafael was beaten by Weimann on the flank but the best work from the Midlanders was always in defence as Antonio Valencia's driven cross was deflected goalwards by Welbeck but Given pulled off a marvellous reflex stop to tip it over the bar.

Welbeck perserved and added a second goal before the break to put the champions firmly in the driving seat. Neat play by Carrick and Rooney in midfield released Patrice Evra on the left but the skipper's centre seemed unlikely to pick out a colleague. However, Nathan Baker appeared to step over the ball, unaware Welbeck was lurking, and the striker snaked out a long leg to divert it home.

Sir Alex's side were comparatively sluggish at the start of the second half with a couple of attacks breaking down due to Rooney being a little careless with his passing as Bannan lashed the only real attempt over the spell well over De Gea's bar from long range. Valencia did have a shot charged down by Collins but Clark's head injury added to the stop-start nature of the second period.

Villa survived another loud penalty shout when Baker appeared to handle inside the box but refused to go down without a fight as substitute Emile Heskey, on for the concussed Clark, forced De Gea to tip over a looping header. Back came the Reds and two fine passes by Jonny Evans and Antonio Valencia led to a real chance for Rooney in the middle but he dragged his effort wide. With Dimitar Berbatov waiting to replace him on the touchline, the Reds' top scorer did get his second of the afternoon with 17 minutes left. Welbeck fed Rooney and Valencia returned the former Everton hitman's pass with pace, allowing him to take a touch and jab a deflected drive past the wrongfooted Given.

It proved to be his final touch before Berbatov came on to add his style to the proceedings. Given got away with a blatant handball outside the box, with the honest Welbeck continuing to try and work his way towards goal rather than appealing, and the keeper soon made a reaction stop to add to Welbeck's frustration despite a deflection off Collins. The Villa No1 showed his class again by keeping out a deflected drive by Valencia after a move sparked by Rio Ferdinand's interception and surge forward.

The visitors' defiance continued with Eric Lichaj flinging himself into the path of a Berbatov attempt while Evans headed the resulting corner from Nani onto the top of the net. Bannan's desperate foul on Carrick, immaculate along with Scholes in the heart of the midfield, brought an obvious yellow card in stoppage time and Nani was also cautioned for holding back Alan Hutton.

There was a sting in the tail as Nani got in on the act by finishing sharply past Given after neat play by Evans and Welbeck led to the Northern Ireland defender providing another impressive asssist. Tom Cleverley still had time to blast one drive over the bar but four goals were more than enough and this was a thoroughly professional and polished performance by the Reds.

David De Gea
Tested in the opening exchanges by Andreas Weimann but had little else to do, apart from showing his concentration levels are always high by tipping over a header by Villa substitute Emile Heskey.

Rafael
Didn't feature at Wigan but returned with his usual vim and vigour, with one backheel to Antonio Valencia straight from the Copacabana beach. A cut-back supplied Wayne Rooney with a chance and his only blip was allowing Weimann to muscle him off the ball for a Stephen Ireland opportunity. Otherwise outstanding, his tackling was sharp and he combined superbly with Valencia down the right.

Jonny Evans
Composed from the outset and his passing out of defence was largely spot-on. Did overhit one cross from an unfamiliar right-wing position but a fine ball to Valencia for another Rooney chance provided further evidence of his assured distribution and, of course, Paul Scholes would have been proud of Evans' pass that allowed Nani to slip in a late fourth.

Rio Ferdinand
Never seems to have a bad game and remains one of the classiest performers in the Barclays Premier League. Reads the game tremendously and always a calming influence, he was in control throughout. A sublime interception and run forward led to Valencia going close to adding to the scoreline.

Patrice Evra
Supplied the centre that allowed Danny Welbeck to get the crucial second goal before half time. Also delivered an inviting cross into the path of Valencia, only for the winger to get his shot all wrong. Displayed bravery and passion for the occasion by winning a battle with Ciaran Clark, a clash that ultimately led to the Villan being replaced with concussion.

Antonio Valencia
It was a relief to see him involved in the early stages after receiving little of the ball at Wigan and he was back to his usual dazzling form. Provided some telling crosses to the likes of Rooney and Welbeck and also had a deflected drive pushed away by Shay Given. A constant menace.

Michael Carrick
Cultured in midfield and stately at times in possession. Involved in the build-up to Welbeck's goal, there were many highlights including a cracking ball out to Evans on the right and a volleyed pass into the path of Rooney after the break. A header to Scholes inside his own box showed his confidence and there was one great moment towards the end when he won a 50-50 tackle, shimmied and then played an accurate pass forward. Booked for a foul on Gary Gardner.

Paul Scholes
A joy to watch as he controlled the tempo alongside Carrick and rolled back the years yet again. Villa resorted to strong-arm tactics to try and stop him in his stride but he recovered after treatment and was a class apart for 78 minutes before being replaced. Two sumptuous volleys from outside the area showed why he's been one of the best technical players England has every produced but his passing was pinpoint all afternoon. Booked for a foul on Gabriel Agbonlahor.

Ashley Young
Earned the early penalty against his former employers after being felled by Clark inside the box and worked hard down the left. Lucky to escape injury after a dreadful tackle by Alan Hutton and this probably led to his substitution for Nani.

Danny Welbeck
Villa's defenders seemed to be finding a knack of getting their bodies in the way whenever he threatened and the ball wasn't breaking for the England striker until the 43rd minute. When Nathan Baker failed to cut out an Evra cross, he reacted smartly to toe the ball into an unguarded net. Only denied more goals by the acrobatic Given, who even had to resort to handling outside the area to frustrate him on one occasion.

Wayne Rooney
Two more goals for the Reds' top scorer - a calmly-taken penalty and deflected drive for the third goal. It proved to be his final act before being substituted and, although his passing wasn't up to his usual high standard throughout, he still provided a major influence on the match and could have added to his tally on a few occasions.

Nani (for Young, 61m)
Another run-out and a goal to show he is ready to play a major role in the final four games. Always a box of tricks, he'll cause defenders problems and showed a cool head to finish his opportunity clinically.

Dimitar Berbatov (for Rooney, 73m)
The fans were keen to get another look at the Bulgarian and Sir Alex obliged by bringing him on for the closing stages. Played with his usual swagger and style and saw one goalbound attempt blocked.

Tom Cleverley (for Scholes, 78m)
There will probably come a time when he's asked to replace Scholes full-time but that could still be another season away on Sunday's evidence. Learning from the master and shot over late on when presented with a chance to add a fifth.