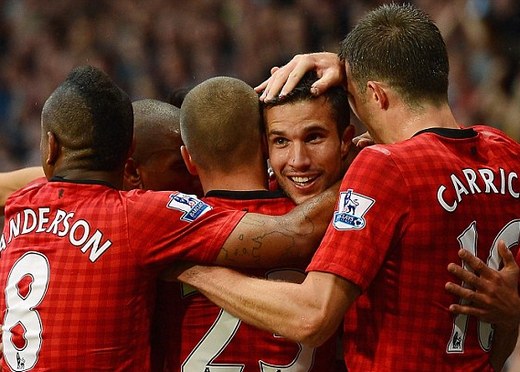 Manchester United's season is off and running, after the Reds came from behind to beat Fulham through goals from Robin van Persie, Shinji Kagawa and Rafael.

Damien Duff had fired the Cottagers into a third-minute lead, only for van Persie to quickly sweep home a magnificent leveller. Close-range finishes from Kagawa and Rafael had the Reds in command by the break, though an unfortunate second-half own-goal from Nemanja Vidic to ensure a nervy end to the afternoon for the hosts, who also lost Wayne Rooney to a badly gashed leg.

Sir Alex Ferguson made four changes to the side edged out in Monday’s defeat at Everton, with Rooney, Paul Scholes and Danny Welbeck dropping to the bench while Nani missed the squad entirely. In their stead, van Persie, Anderson, Rafael and Ashley Young started.

While blessed with myriad attacking options, the Reds’ ranks were still short on defensive numbers. Though Jonny Evans was fit enough to take his place on the bench, Michael Carrick again continued in central defence alongside Nemanja Vidic, who made his first Old Trafford outing since November 2011.

The skipper’s homecoming began in dreadful fashion as Fulham forged ahead after little more than two minutes. Rafael slipped while in possession, allowing Mladen Petric to draw Carrick into a foul on the edge of the Reds’ area, close to the byline. Rather than shoot or fire a cross into the cluster of bodies, Bryan Ruiz craftily rolled a square ball to Damien Duff, who shrugged off Young’s attentions to slot a simple finish past David De Gea.

United’s response was positive. Antonio Valencia, restored to his regular role as a winger after Rafael’s reinstatement, fired a cross behind Van Persie and Kagawa after impressive approach play, before the Reds drew level in sensational fashion in the tenth minute.

Inevitably, it came from the left boot of van Persie. The lively Patrice Evra whipped in a cross from the left which skipped up awkwardly off the rain-sodden turf, yet the summer’s marquee signing made a mockery of such inconveniences, peeling away from Brede Hangeland before sweeping a majestic finish high into Mark Schwarzer’s goal.

Old Trafford, inevitably, erupted in recognition of the new figure on centre stage. The roar was also tinged with relief that the visitors had been so swiftly pegged back. Fulham, to their credit, appeared unaffected by the Dutchman’s strike and continued to push forward with intent whenever the situation arose.

It took quick thinking and fancy footwork from De Gea to niftily manoeuvre away from Petric, moments before Valencia arrowed a shot past Schwarzer’s top corner. Ten minutes before the interval, United moved into the lead for the first time with another goal from a home debutant.

Van Persie’s right wing corner was only cleared as far as Tom Cleverley, whose thunderous low shot was parried out by Schwarzer to the lurking Kagawa, who turned in a simple finish. The visitors irately appealed for an offside decision, yet the Japanese international was played onside by Sascha Riether, who was slow to leave his position guarding the far post.

The flag that Fulham were waiting for arrived two minutes later to spare them another concession. Rafael’s alertness fed Kagawa, whose shot struck the base of Schwarzer’s post. Though Young’s follow-up was spilled and turned in by Rafael, the Brazilian was correctly called offside.

United’s new number two soon had the ball in the net again, however, and this time there was no reprieve for the Cottagers. Another spell of pressure from the Reds culminated in Young stabbing a left-footed cross to the back post, where Rafael had peeled away from Petric to head the ball inside Schwarzer’s near post.

In keeping with a pulsating game, Fulham still had time to fashion another opening before the break. Indeed, they mustered four efforts in five frantic seconds as Evra bravely blocked Petric’s acrobatic effort, De Gea padded away Duff’s follow-up and then brilliantly deflected Petric’s shot against the underside of the bar with his legs, before Ruiz blazed the ball high into the Stretford End.

After making such a nightmarish start to the first half, United began the second period in more alert fashion. Valencia’s cross almost provided van Persie with a tap-in and Young appealed for a penalty after tangling with Riether, then brought a fine block from Aaron Hughes after latching onto van Persie’s through-ball.

The Dutchman curled in a fabulous in-swinging cross which Rafael headed over the bar, before Fulham reduced the arrears in bizarre circumstances. Matthew Briggs clipped in a high cross from the left which De Gea, Vidic and Petric all went for, with the Fulham striker seemingly nudging the United stopper as the ball hit Vidic’s heel and trickled over the line.

As nerves began to grip the home support, Rooney and Welbeck were sent on to replace Kagawa and Young, but Fulham almost pulled level immediately. De Gea first tipped Moussa Dembele's swerving drive over the bar, then from the ensuing corner produced a brilliant reaction stop from the same player.

Schwarzer emulated those heroics by flicking over Rafael's fizzing 20-yard effort as the Reds sought to safeguard victory. Sir Alex freshened up his central midfield with the introduction of Ryan Giggs for the final ten minutes, with Anderson making way. Another substitute, Hugo Rodallega, then forced a fine sliding block from Carrick after a neat through-ball from Ruiz.

Rooney fired narrowly past the top corner after latching onto Cleverley's intelligent through-ball, but the afternoon ended on a sour note for Rooney when Rodallega accidentally raked his studs down the England striker's inner thigh, leading to a lengthy stoppage with the game already in injury-time.

A dismaying end to the game might have plunged even further for United, who required another De Gea save - this time to fend away Ruiz's header - to preserve a hard-fought, bewildering win. Nevertheless, the Reds are off and running for the new season.