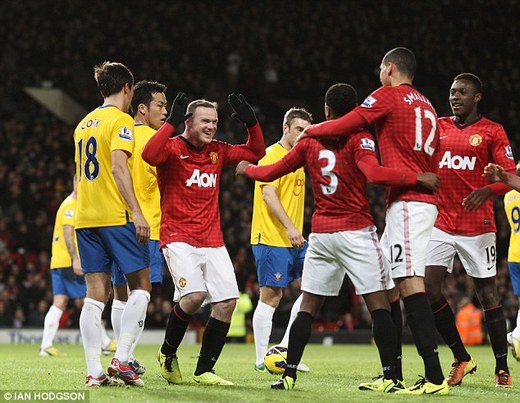 Manchester United stretched the lead at the Barclays Premier League to seven points on a night that become all about simply getting the job done against spirited Southampton.

For the ninth time in the league this term, the Reds came from behind to take the points but this was a nervous occasion following a more than satisfactory first half. After the interval, it's fair to say that the men from the South Coast were the better side.

Sir Alex Ferguson opted to play without wingers as Shinji Kagawa and Danny Welbeck were asked to parade the flanks in an attacking line-up. But the match had hardly settled down when the Saints stunned Old Trafford with the opening goal inside three minutes.

Michael Carrick intercepted a Morgan Schneiderlin pass but his volley back to David De Gea put the keeper in all sorts of trouble with Jay Rodriguez getting to the ball first, nudging it past the Spaniard and rolling into an empty net. It was a gift for the visitors but the damage was repaired within five minutes. 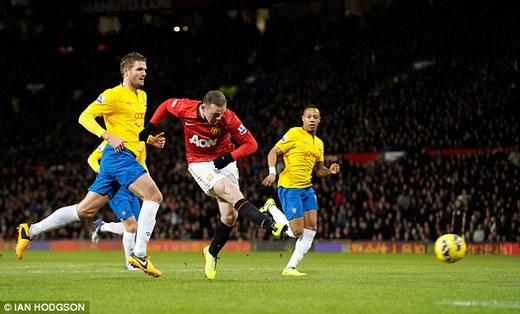 Kagawa collected a deflected Carrick pass and threaded a superb through ball into the path of Rooney, who supplied a simple, but clinical, finish past Artur Boruc to register his 100th goal at the Theatre of Dreams for the Reds. The celebrations had not died down when Rooney returned the favour to Kagawa, touching on a Phil Jones cross from the right, and the impressive Japan international was desperately unlucky to hit  the inside of an upright from a tight angle.

Southampton continued to contribute during an even opening period and Gaston Ramirez smashed a free-kick over the bar as Mauricio Pochettino's new side displayed plenty of confidence and ambition. Yet United carried the greater threat with Robin van Persie cutting inside to prompt the usual buzz of anticipation around the ground before seeing his shot deflect off target.

A dangerous cross by Rooney found its way through to Boruc, who scrambled clear, despite Kagawa and Danny Welbeck looking to pounce, and the Reds moved in front in the 27th minute. Van Persie floated a free-kick to the far post where Patrice Evra's diving header back across goal allowed Rooney to tap in from close range. 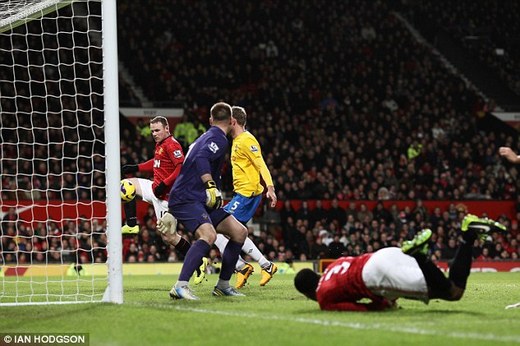 Evra and van Persie both fired wastefully wide from similar positions as Sir Alex's side hit top gear, cutting the Saints open with some outstanding moves. Welbeck was the central figure in supplying Evra's opening while Kagawa profited from a gem of a pass by Rooney to release van Persie, who was uncharacteristically profligate when presented with a sight on Boruc's goal.

The hosts continued to press before the break but Boruc kept out Welbeck after the England international expertly controlled a van Persie pass and let fly with his left foot. However, the match turned in the Saints' favour at the start of the second half when they noticeably upped  their work-rate and brought on a couple of energetic substitutes.

Rickie Lambert had a volley well held by De Gea before cracking another attempt wide following an error by Chris Smalling. A casual pass by Kagawa was picked up by his fellow countryman Maya Yoshida and, when Smalling headed out the centre, substitute Steve Davis dragged his shot off target.

The lethargy brought the boss down to the touchline but the chances kept coming at De Gea's end. The Spanish shot-stopper gobbled up a Lambert free-kick at the second attempt while Davis nodded over the top as the pressure was maintained.

Sir Alex obviously felt it was time to introduce a calm head, replacing Smalling with Rio Ferdinand, in an attempt to steady the ship. At least Rooney mustered a first noteworthy effort of the second half on 71 minutes but his shot lacked the power to beat Boruc after being picked out by strike-partner van Persie.

Nani joined another substitute, Rafael, on the field with Jones reverting to midfield as United desperately sought to regain some energy and sparkle. Nani was quickly involved with van Persie unable to convert his cross due to a brilliant stop by Boruc and, when the Dutchman did find the net from a Rooney centre soon afterwards, he was flagged offside.

It looked a marginal decision but Pochettino's men retaliated to earn a free-kick at the other end which allowed De Gea to show off his quality, diving to claw away Lambert's effort in spectacular fashion. Rooney over-ran the ball from a van Persie flick, which enabled Boruc to save at his feet, but the Reds were at least showing more menace as the match entered its closing stages.

Yet the lead remained a slender one with Vidic needing to block Lambert's drive and Schneiderlin popping a drive too high seconds later. When the fourth official showed three minutes of additional time, it was at a time when there was one-way traffic from Southampton. United managed to hold on for three points but it became all hands on deck at the death with two-goal Rooney required to defend desperately.