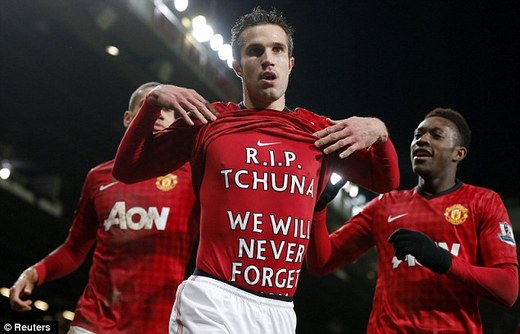 An early own goal by Gareth McAuley and Robin van Persie's late strike proved decisive as Manchester United were made to work all the way for three points against West Bromwich Albion in the Reds' final match of 2012.

Ashley Young's cross led to the opener but the visitors grew in stature in the second half and ensured a nail-biting afternoon for the Old Trafford faithful until substitute van Persie sealed another important victory.

As he'd promised, Sir Alex Ferguson tinkered with his line-up, making five changes, with Shinji Kagawa returning to the side behind Danny Welbeck. Thankfully, the rain had that prompted a pre-match pitch inspection abated but the soggy surface necessitated the Reds getting the ball forward quicker than usual.

After a shaky opening - during which Michael Carrick needed to slide-tackle Shane Long after the Irishman had turned Nemanja Vidic and Chris Smalling was fortunate not to concede a penalty after a rash challenge on the lively Baggies attacker - United took control of proceedings. 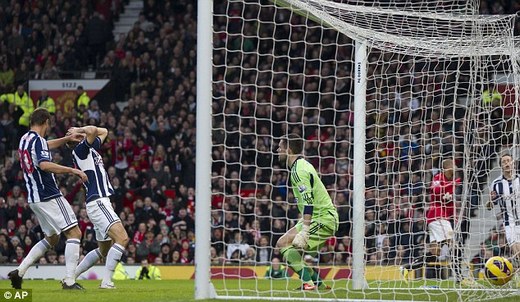 Young worked a one-two with Kagawa and, when the ball fell into his path, the winger drilled in a cross that deflected off Gareth McAuley and past former Reds keeper Ben Foster in front of the jubilant Stretford End.

The Barclays Premier League leaders looked to extend the advantage with Welbeck unable to reach a long ball by Tom Cleverley and then working Foster from a Kagawa pass. Some of the football was spellbinding at times and, after one stunning move, Carrick had a shot charged down.

On the half-hour mark, Young could only divert a header over the top when a Welbeck drive deflected to him at the far post before the hosts really turned up the heat. A peach of a pass down the line by Kagawa released Antonio Valencia and his cross eventually found its way through to Young. The former Aston Villa star's shot was goalbound until Foster made a superb one-handed save to tip it onto the bar.

From the resulting corner, Vidic poked the ball back to Carrick following a scramble but the midfielder's effort was blocked by Gabriel Tamas with Old Trafford anticipating a second strike. Another flag-kick saw Vidic head wide and Cleverley mishit a cross that drifted off target.

Albion mustered a moment of danger when Peter Odemwingie broke into the box between Smalling and Valencia but the forward dragged wide. However, most of the action was at the other end as Foster was lucky to see his clearance cannon past his right-hand post off Welbeck, who charged him down with his usual zest.

Steve Clarke's side managed to finish a one-sided half in the ascendancy by earning a couple of free-kicks around the area but captain Vidic kept things tight in defence after earlier proving his full return to fitness with a bone-crunching challenge on George Thorne.

After being given some encouragement, the visitors improved following the interval with Brunt firing a fierce drive straight at David De Gea and Carrick clearing from McAuley from a dangerous free-kick to the far post. Brunt and Graham Dorrans also had efforts as United struggled to rediscover the flowing football that was a feature of the first period.

As the rain started to cascade down again, the match remained in the balance with Foster barely tested until clawing away a Valencia attempt seconds before Kagawa made way for top scorer van Persie. Clarke made a change of his own by introducing Chelsea loanee Romelu Lukaku to the action and the substitutions added punch to both attacks.

There was a let-off when McAuley almost atoned for his own goal by heading against the bar but referee Jon Moss rightly awarded a free-kick as the defender was climbing over Smalling to get to the corner. Nonetheless, it was another warning, if any was needed, that the high-flying Baggies were capable of getting something out of the encounter.

Sir Alex restructured the side in a bid to hold onto the lead with Valencia dropping to right-back and Smalling switching to the middle to form a five-man defence. It left United short of options going forward as the crowd became increasingly nervous, with this tension transmitting itself to the players.

A chance was finally carved out when Evra threaded the ball through to van Persie but the Dutchman's shot was saved by the legs of Foster. Vidic, excellent throughout, unconvincingly helped an Odemwingie drive out for a corner as the pressure continued with the leaders only capable of occasional breakaways led by the isolated van Persie. Yet the Reds' leading scorer still managed to have the final say after Welbeck's shot had forced a corner through Foster's diving stop. 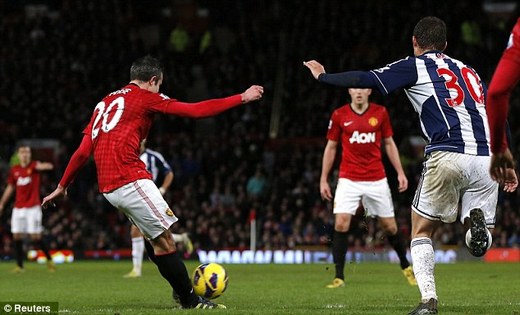 Subsitute Paul Scholes had a shot blocked and picked up the rebound to feed van Persie and the deadly striker did the rest, biding his time before bending a brilliant effort over Foster to double the advantage and finally sink the brave Baggies.

This wasn't vintage United but it keeps Sir Alex's side seven points clear at the top of the table heading into 2013.