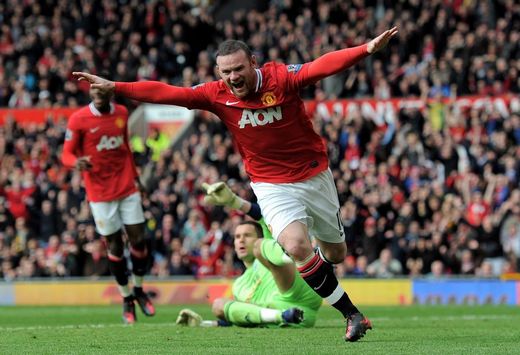 Wayne Rooney struck in either half to give United a comfortable victory over 10-man West Brom and move the Reds to the top of the Barclays Premier League table.

Having survived a strong opening from Roy Hodgson's on-song Baggies, United took control of an entertaining game midway through the first period and rarely looked like slipping up after Rooney diverted home Chicharito's shot.

The England striker then clinically converted a penalty after the lively Ashley Young had been felled, by which point Jonas Olsson had been sent off for garnering two yellow cards. United's victory took on added significance when news filtered through that Manchester City had lost at Swansea City.

It was the visitors, however, who forged the game's first opening of note. After James Morrison pinched possession midway inside the United half, Liam Ridgewell curled a fine cross into the hosts' six-yard box, where the onrushing Keith Andrews could only steer the ball wide of De Gea's goal.

Only a terrific block from Evans prevented Marc-Antoine Fortune from unleashing a shot deep inside the hosts' area, while Morrison blazed the rebound comfortably over the bar. United's first attempt came from Ashley Young after a weaving run from Welbeck, but the winger's shot was batted away by ex-Red Ben Foster.

It was De Gea who remained the busier of the two goalkeepers in a free-flowing opening to the game, however, and the Spaniard needed to be alert to drop to his right and push Andrews' low, deflected free-kick around the post as the visitors' menace remained.

Roy Hodgson's side, buoyed by successive victories over Wolves, Sunderland and Chelsea, were impressively tenacious; pressing United all over the field, regrouping swiftly in defence and always looking to exploit the Reds' commitment to attack with swift counters of their own.

Welbeck's sharp start to the game made him one of the leading contenders to inspire a breakthrough for United. He powered Young's in-swinging corner over the bar with a back-post header, then released Young with an impudent back-heel. Though the winger reached the ball before the onrushing Foster, Jonas Olsson was on-hand to clear the cross.

Young was again involved in Rooney's first opening of the game. The winger profited on fine industry from Patrice Evra and Javier Hernandez before whipping the ball to the back post, where Rooney failed to gain sufficient purchase on his volley to do any more than tamely direct it to Foster.

There would be no such charity with the striker's next act, 10 minutes before the break. A sustained spell of United pressure culminated in Scholes spreading the ball wide to Chicharito. The Mexican cut inside Ridgwell and arrowed a left-footed shot towards goal, but Rooney intercepted the ball's flight and diverted it beyond the committed Foster.

Old Trafford's atmosphere was sufficiently cranked up by the goal, and maintained by an impressive end to the half from United. Jones headed into the side-netting from another deep Young cross, while Welbeck only narrowly failed to reach Evra's pull-back after an incisive move down the Reds' left flank.

For all the end-to-end excellence of the first period, however, the second period began with a muted five-minute period before bursting into life thereafter. Peter Odemwingie was convinced he should have had a penalty after tumbling under a perceived challenge from Evra, but United immediately hit back.

Rooney led a counter-attack while Odemwingie was still appealing. The ball was slipped inside to Chicharito, and the Mexican unleashed a shot which thundered against the top of Foster's post and rebounded to safety. The striker's wry grin betrayed his misfortune.

The chance heralded a glut of chances for the Reds. Rooney's left-footed overhead kick went straight to Foster, as did a near-post flick from Chicharito, before Scholes' superb ball over the top released Welbeck. Though Foster mis-read the flight of the ball and presented the striker with an untended goal, Welbeck stretched and dragged his left-footed shot agonisingly wide of the post.

United's pursuit of a second goal was aided when Olsson, earlier booked for a challenge on Rooney, unceremoniously halted Chicharito's progress and earned a second caution. The Reds immediately pushed on. Evra was denied a penalty when his shot struck Gabriel Tamas' arm, but referee Lee Probert was less forgiving when Andrews, pushed to right-back, clumsily stopped Young's run near the byline.

The latter soon looked to make his mark, latching onto Mulumbu's through-ball and thrashing a shot towards De Gea's near post. While the Irishman had embarrassed the Spaniard on the opening day of the Premier League season, the United stopper ensured no repeat with a fine save.

As United sought to assure victory, Young headed off-target from Chicharito's superb cross and the Mexican then skewed his shot well over the bar from close range, but the Old Trafford roof was almost lifted off by events in another country, with the news from Wales that Manchester City were trailing Swansea.

United opted to see out the final few minutes in comfort, rather than try and press home their advantage. Within the wider war, another key battle had been won. With 10 games to go in the title race, the champions now lead the way.

David De Gea
Made an alert early save from Andrews’ deflected free-kick and parried away a late Shane Long effort, but otherwise impressed with the ball at his feet; distributing calmly and expertly throughout the course of the game.

Phil Jones
Made an indifferent start to the game, but quickly recovered and began to reverse the pressure down his flank. Tossed in some decent crosses and almost bagged a first-half header.

Rio Ferdinand
As assured as ever at the back, and looks completely at ease in his partnership with Evans. Read everything before it had happened, making it look like an easy afternoon’s work.

Patrice Evra
One of the Reds’ most fruitful attacking outlets throughout the game. Bombed forward wherever possible and showed signs of a burgeoning relationship with Young down the left flank.

Danny Welbeck
Despite a rare deployment on the right flank, he looked United’s most dangerous attacker in the first period. The ball appeared glued to his feet during several winding runs, though he will be haunted by his second-half miss at the Stretford End.

Paul Scholes
Just what you’d expect from the string-puller extraordinaire. As ever, looked comfortable with Michael Carrick at his side and kept the ball moving all the time. Played a key role in Rooney’s opener.

Michael Carrick
Quietly kept the ball moving and worked possession well. Showcased his full range of passing – including one or two uncharacteristically errant balls – and looked untroubled throughout.

Ashley Young
Another outstanding display from the livewire winger, who rampaged up and down the left flank and played a key role in the game’s outcome by winning the all-important penalty.

Wayne Rooney
Took all the headlines again with his second brace in four days. Extremely alert to divert home Chicharito’s shot and clinical once again from the penalty spot. United’s go-to guy when goals are needed.

Chicharito
Put in a sweat-soaked shift full of running. Occupied West Brom’s entire defence over the course of the game and teed up Rooney’s opener, though he too will have sleepless nights over his second-half miss.

Paul Pogba (on for Scholes, 72)
The centre of much recent speculation, and demonstrated his promise with a neat cameo in which he almost bagged his first senior goal.

Tom Cleverley (on for Welbeck, 77)
Typically economical with the ball during his brief, but enjoyable outing. Started the season at The Hawthorns and hopefully this Baggies encounter can be another launchpad.