May 7, 2012
Posted by Steven Tan | Source from Adam Marshall, ManUtd.com 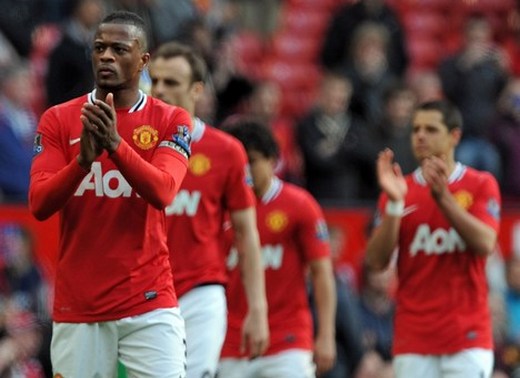 United moved level on points with Manchester City at the top of the table but the fact that goal difference remains hugely in the Blues' favour means the title is very much out of the champions' hands.

After City won 2-0 at Newcastle earlier in the day,  it was credit to the Reds that victory over dogged Swansea was at least secured to take the race for the trophy to the final game with United at Sunderland while City host Mark Hughes' QPR.

After an understandably subdued opening spell, following events on Tyneside, Nathan Dyer had the first noteworthy attempt with a drive that was watched over the bar by David De Gea. It seemed to spark the Reds into action and Michel Vorm had to make a double save to thwart Patrice Evra and Wayne Rooney.

Six minutes later came the breakthrough to lift Old Trafford. Antonio Valencia had barely been involved when he was fed on the right by Phil Jones and beat his marker Neil Taylor with ease. Michael Carrick's measured shot from the cut-back was expertly backheeled into the net by the evergreen Scholes.

Valencia started to sparkle, allowing Carrick to cross agonisingly close to Javier Hernandez, and the Mexican's lay-off then led to Young being rashly challenged by Angel Rangel inside the box with Chris Foy rightly only awarding a corner.

Sir Alex's side started to pose a threat from both flanks as Young's cross was headed on by Scholes but nodded over from close range by Hernandez and Wayne Rooney drifted an attempt off target after collecting a Hernandez header. Some sloppy play by the Swans gifted Scholes posession in a dangerous position and, although Rooney picked up the veteran's pass and saw a shot blocked by Rangel, Young was on hand to steer a precise finish into the corner of the net.

Defenders Jones and Chris Smalling also had efforts on goal towards the end of the half as, after being slow to reach top gear, United really started to lift the mood around the ground. But any hopes that the Reds would really go gung-ho in the second half were misplaced as Gylfi Sigurdsson forced David De Gea to shovel his shot uncomfortably behind.

There was a lightning break, instigated by Scholes' brilliant pass out of defence, but Dyer prevented Rooney's cross from finding Young and, when the former Villa winger did get an opening soon afterwards, his drive deflected off Ashley Williams to wrongfoot Vorm but went the wrong side of the keeper's right-hand post.

Hernandez headed over from another promising position following a Valencia cross but Swansea remained a threat as De Gea managed to keep out Danny Graham after the striker helped on a Joe Allen shot. And the two teams continued to trade efforts in an end-to-end affair with Valencia's shot blocked by Taylor, Dyer firing wide when off balance and De Gea diving to save a Sigurdsson free-kick.

Rooney really should have added a third after Valencia rode a challenge from Allen and found Carrick, whose instant pass deserved a better finish from the Reds' top scorer, who instead drifted his shot wide. After Rooney was replaced by Dimitar Berbatov, the Bulgarian headed on a Young corner to Hernandez, whose clever spin led to a shot being deflected by Williams and, from the next flag-kick, Jones rose well to force a routine save out of Vorm.

Graham shot straight at De Gea on the break, before Rio Ferdinand limped off with what looked like a groin problem that could mean Sir Alex will be without both the England international and Jonny Evans for the trip to the Stadium of Light. Tom Cleverley had a chance with a couple of minutes left, forcing Vorm into another save, but there was to be no goal avalanche with the champions instead relying on former idol Hughes' QPR to pull off an almighty shock next Sunday.

David De Gea
Dealt with everything that was thrown at him, even if a couple of stops from Gylfi Sigurdsson and Danny Graham appeared to require a little fortune going his way. Showed his agility to keep out a Sigurdsson free-kick and will be pleased with another clean sheet.

Phil Jones
Tackled sharply, with one on Neil Taylor right out of the top drawer, and also mustered a couple of efforts, firing down Vorm's throat and forcing the keeper to save a towering header. Drifted a couple of crosses behind the goal but was always willing to roar forward and did well in the build-up to one of Javier Hernandez's chances.

Chris Smalling
Reads the game so well and was largely in control at the back. Harshly penalised for a foul on Sigurdsson as the timing of his challenges were pretty spot-on and he made one block to deny Graham at the start of the second half. Touched a header wide from a corner and was thwarted by a Vorm punch after joining the attack.

Rio Ferdinand
Supreme at the start of both halves and that set the tone in terms of a defensive performance. Intercepted forays forward with his customary guile but worryingly left the field in some discomfort with an injury that must cast doubt over his participation at Sunderland.

Patrice Evra
Aggressive and combative, he played at the tempo required from the outset. Got back swiftly to stop Nathan Dyer in his tracks and hammered in a volley that was spooned away by Vorm. Another drive forward led to panic in the Swans' box and one of his crosses created an opportunity for Valencia.

Antonio Valencia
Wasn't really involved until he sped past Taylor to create the opening goal and he was then in the mood, posing a real threat down the right. Had a couple of shots blocked, one crucially by Taylor when a third goal seemed on, and one fair barge on the full-back provided further evidence of his power. Showed a rare flash of temper when conceding a foul late on.

Michael Carrick
Some of his passing was outstanding, none more so than the first-time ball to Wayne Rooney that should have led to a goal. Also teed up Paul Scholes' opener with a measured left-foot shot and found himself in the thick of things throughout. Another of his attempts deflected into Vorm's arms.

Paul Scholes
By his high standards, he was a little sloppy early on but displayed ageless quality when backheeling past Vorm to break the deadlock. His game returned to its normal levels and he headed on for a Hernandez opening and tackled back tenaciously to dispossess Dyer. Also involved in the build-up to the second goal when he picked up a stray pass and fed Rooney and there was one trademark switch of play in the second half to pick out Jones. A moment of magic saw him clear a shot on his own goal with a brilliant pass out of defence to Valencia.

Ashley Young
Heavily involved and carried the game to the Welshmen by planting numerous crosses into the box. One of the centres led to a chance for Hernandez and he found the net himself with a perfectly-placed right-foot finish when the ball rebounded into his path. A tackle on Scott Sinclair illustrated his desire and some fine skill down the left to beat Dyer and Angel Rangel proved his dribbling ability.

Wayne Rooney
Denied a goal by Vorm and defensive blocks while also guided a couple of angled finishes off target, one he will feel should have ended up in the back of the net after Carrick's pass released him. His shot set up Young's strike but consecutive over-hit crosses showed he hadn't quite found his range and the frustrated forward picked up his first domestic booking of the season before being substituted.

Javier Hernandez
A heavy touch led to an early Rooney pass going out of his reach and it proved to be one of those days for the Mexican predator who was inches away from converting a Carrick centre when trying to replicate Scholes' flicked finish. A penalty claim after he was manhandled by Vorm at a corner was turned down by Chris Foy and he headed over two close-range opportunities. When he did get a shot on target, it was deflected away by Ashley Williams.

Tom Cleverley (for Scholes, 68m)
Stretched to force a save out of Vorm after sprinting into the area and he made one stylish interception to stop the ball reaching Luke Moore.

Dimitar Berbatov (for Rooney, 79m)
Headed on to supply Hernandez with a chance but was unable to have any real influence on the proceedings.

Rafael (for Ferdinand, 88m)
Only on the pitch for a couple of minutes but it was enough time to make one of his customary tigerish tackles.

Sir Alex Ferguson "Thank You" to fan's support after 2-0 win against Swansea.