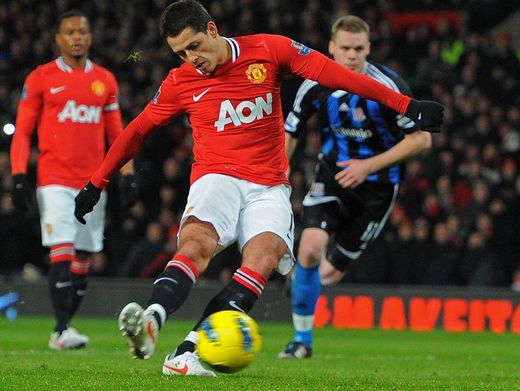 The two strikers, paired in attack for the first time since New Year’s Eve, shared the spot-kick duties either side of the interval as Stoke City’s resistance crucially faltered on two occasions.

Chances in open play were few and far between, but opportunities to impress were taken with both hands by two Barclays Premier League debutants – Ben Amos started in goal with Anders Lindegaard and David De Gea both injured, while Paul Pogba replaced Chicharito for a memorable last 18 minutes.

Meanwhile, Pogba’s former United Reserves team-mate Ravel Morrison was completing a permanent move to West Ham but the bigger distraction for the home fans was the news of Darron Gibson – another January departure from Old Trafford – scoring against City for Everton at Goodison Park.

The Reds began this game with four changes to the line-up that lost at Liverpool, with Amos, Rio Ferdinand, Berbatov and Hernandez coming in for De Gea, Rafael, Ryan Giggs and Danny Welbeck.

As the drafted-in players bedded down, Stoke made the brighter start. Jon Walters demonstrated the danger he can present with a driving run and shot that flashed inches wide of Amos’ right-hand post. Kenwyne Jones then volleyed comfortably the wrong side of the same upright after Ferdinand only managed to half-clear Jermaine Pennant’s cross. At the other end, Michael Carrick had a low drive blocked by Ryan Shawcross, the former United player at the heart of the Potters’ defence.

Scholes, scorer of the first goal in United’s previous home game, almost seized the same role in this contest when his turf-skimming missile was deflected narrowly off-target.

Evra, so much in the spotlight on Saturday, tried to grab some limelight when he broke into the area and went down for only half-hearted penalty appeals from the crowd, and then whipped the ball into the side-netting from United’s next attack. Stoke’s other flank came under flak from in-form Antonio Valencia but Thomas Sorensen dealt effectively with the Ecuadorian’s angled drive, diving through the forest of defenders’ legs to push the ball away.

Sorensen could only look on and pray however when Carrick fed Park and ran on to collect Berbatov’s ball into space behind the Stoke defence.

The midfielder fired across the keeper but, agonisingly, his effort ran past the far post and United’s best chance of the half so far went begging.

Thankfully a better chance came along moments later, created by Scholes with his back to goal, flicking the ball into the path of Park who was upended by Pennant in the box. It wasn’t the most clear-cut of calls for referee Mike Jones and he was surrounded by Stoke players in protest. But Chicharito paid no attention, kept his head and tucked the spot-kick into the bottom left-hand corner with Sorensen diving in the other direction. Pennant was doubly punished with a yellow card for his sin.

The Mexican made a strong shout for a second penalty shortly afterwards but this time referee Jones waved play on after the scorer’s cross struck Shawcross on the arm. Stoke broke forward and Scholes tripped Kenwyne Jones to pick up United’s first booking.

If Tony Pulis sent his Potters out with a new game plan for the second period, it was in tatters when Walters wrestled with Valencia and impeded the Ecuadorian so much that Jones had no option other than pointing to the spot for a second time.

Chicharito, the scourge of Stoke with four goals against them in two seasons, stepped aside this time and allowed Berbatov to bag his ninth strike of the campaign. Sorensen went the right way this time but the Bulgarian’s penalty went under him and into the bottom right-hand corner.

The pattern of the game remained the same throughout the second half, with United dominating possession and Stoke desperately trying to deny the Reds time and space. Aside from Amos saving well from Cameron Jerome's header, the action was all in front of the Stretford End. One or two other penalty claims were unsuccessful, the strongest following Wilkinson’s challenge on Evra; the lively Pogba was denied a dream debut goal when the same defender blocked his shot and Berbatov slotted just wide in injury time from Valencia's tireless supply line.

But ultimately two goals were enough for the champions who were composed and comfortable – and can feel ever more confident that the title can be retained this season now that City have again been pegged back on points.

Ben Amos
The young goalkeeper, stepping up in the absence of Anders Lindegaard and David De Gea, enjoyed a quiet evening and made several comfortable saves, including one from a low Cameron Jerome header. Will be pleased to mark his Premier League debut with a clean sheet.

Chris Smalling
Reverting back to his less familiar right back berth, the England international showed his defensive versatility and did well to support Valencia on the wing. Forced Walters and Wilson to come inside and seek other avenues of attack during a competent display.

Rio Ferdinand
After missing Saturday’s defeat to Liverpool, the veteran defender could hardly have wished for an easier outing against what was expected to be a physical Potters attack. As ever, the centre-back looked calm in possession and made several well-timed tackles.

Jonny Evans
The Northern Ireland international showed his aerial prowess against the considerable frames of Crouch and Jones during an accomplished display at the back. His attacking talents were also on show at times, threading through a neat pass for Chicharito who hit the side netting from an offside position.

Patrice Evra
United’s stand-in captain was forced to deal with Stoke’s main attacking threat, Jermaine Pennant, and managed to keep the former Arsenal winger at bay for much of the match. The Frenchman could also have won a third penalty when he was felled by Shawcross.

Antonio Valencia
December's Player of the Month continued his fine form and looked increasingly dangerous throughout the match, linking up well with wing deputy Smalling to provide a lively threat from the right. Almost supplied a late goal with moments to go, when his cut back was sliced wide by Berbatov.

Michael Carrick
Producing a fine performance on the front foot, he came as close as anyone to scoring from open play when he cleverly combined with Park and Berbatov to run in behind the stubborn Stoke rearguard. Also adept on the rare occasion when the Reds had to defend, he took a blow to the head from Huth but still completed the full 90 minutes.

Paul Scholes
Breaking down Stoke’s back eight or nine was no easy feat but Paul stayed patient and probed with another display of metronomic passing. A trademark shot from distance almost yielded the first goal for United, before a trademark tackle earned the Reds’ only booking.

Ji-Sung Park
The South Korean, fresh from bagging a goal at the weekend, put in a lively shift on the left wing and looks to be gaining match sharpness with every outing. His pace and movement inside the box was also too much for Pennant, whose clumsy challenge was enough to earn the Reds a first-half penalty.

Dimitar Berbatov
Netted his ninth goal of the season with United’s second penalty, steering it past Sorensen with deadly accuracy. Could have reached double figures with the final shot of the night but fired narrowly wide in injury time.

Javier Hernandez
The Mexican made a welcome return to the scoresheet when he sent Sorensen the wrong way from the penalty spot. His first goal since 26 November, it was also his fourth in four meetings with Stoke.

Paul Pogba (on for Hernandez, 73)
The Frenchman’s eagerly-awaited league debut didn’t disappoint. Some exciting moments around the box helped to lift the game out of a lull, not least when his shot from Park’s pull-back was blocked by Wilkinson to deny him a dream first goal.