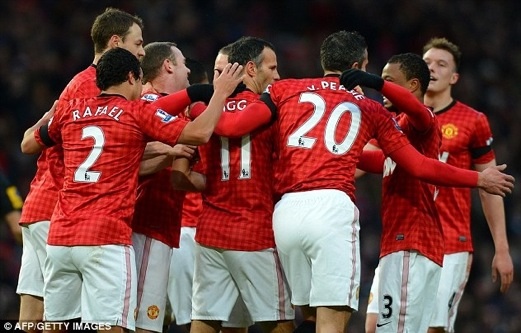 Victory over Everton - courtesy of goals from Ryan Giggs and Robin van Persie - stretched Manchester United's lead at the top of the Barclays Premier League to 12 points.

With just 12 games to play, Sir Alex Ferguson’s men are now undoubtedly well placed to go on and clinch a 20th league title, although the events of last season – when United blew an eight-point lead with just six games remaining – means nobody at Old Trafford is getting too carried away just yet.

On Sunday, however, United looked for long periods like the sort of side that has what it takes to win silverware. Fluid in attack, solid in defence and willing to mix it in midfield against a combative Everton outfit, the Reds’ performance arguably contained everything Manchester City’s display against Southampton 24 hours earlier lacked.

United certainly began positively, passing well and committing to full-blooded challenges in the middle of the park. And when Wayne Rooney slipped a pass between two defenders and van Persie rounded Tim Howard in the Everton goal, it looked certain the home side would take the lead on 10 minutes. The Dutchman, usually so accurate in front of goal, smacked his right-footed shot against the upright, however, and the visitors breathed a sigh of relief.

Three minutes later, van Persie atoned for his miss, latching onto Antonio Valencia’s header and skipping past his marker before squaring the ball to Giggs, who controlled with his left foot before coolly side-footing home via the inside of the post with his right. It was the veteran's first league goal of the campaign and, incredibly, it means he has now netted in each of the Premier League’s 21 seasons.

To their credit, Everton made a decent fist of it after Giggs’ opener, although failed to test David De Gea until the 29th minute, when the Spaniard flung himself to his left to push away Leon Osman’s dipping 20-yard volley. From the resulting corner, Nemanja Vidic made an exceptional block to deny Kevin Mirallas and van Persie bravely got himself in the way of a Darron Gibson rocket.

The Dutchman finally beat the Toffees’ offside trap to collect Rafael’s clever pass and race clear. With Howard advancing, van Persie shaped to shoot but instead dragged the ball to the right and around the goalkeeper before applying a finish that had just enough legs on it to cross the line, albeit with a dash of help from John Heitinga, sliding in to try and prevent the goal.

Van Persie’s strike, his 23rd of the season, gave United a two-goal cushion at the break. But the memories of last season’s corresponding fixture – when Sir Alex’s men threw away a potentially title-clinching 4-2 lead with seven minutes remaining to draw 4-4 – will have ensured there was no complacency in the United dressing room at half-time.

Indeed, the Reds came out in the second period keen to score again, although an injury to Jones forced a subtle shift in approach before the hour mark. On in his place came Michael Carrick – more of a ball player but less of a physical presence – and United’s bluster gave way to a calm, passing game.

Jonny Evans twice went close to finding the net on 66 minutes. First, his close-range header was kept out by Howard; then, in the ensuing scramble, the defender’s hooked shot was diverted on the goal-line by Nikica Jelavic. Tom Cleverley was denied a spectacular volleyed goal from 20 yards when Howard stretched to his left and tipped the ball up and over the bar. De Gea performed similar heroics when he palmed out substitute Jelavic’s long-range effort before Rafael had to be alert at the back post to turn behind Phil Neville’s searching cross.

Try as they might, Everton could conjure no fairy-tale comeback this time. United dug deep, defended stoically and saw out the match to record a vital victory.