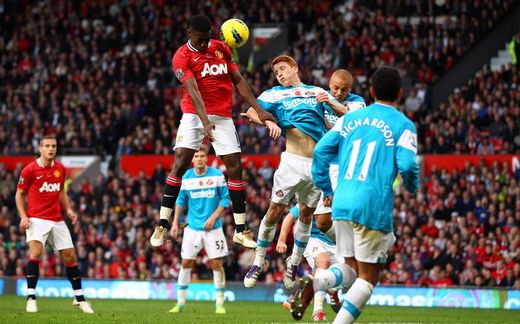 On the eve of Sir Alex's 25th anniversary in charge of Manchester United, the Reds boss celebrated in a manner he's become so accustomed to down the years: by guiding his team to victory.

Rather cruelly for Wes Brown, though, it was his gift of an own goal, on his first visit back to Old Trafford after leaving for Sunderland in the summer, that settled the contest.

At the end of a game that was largely devoid of, United had moved to within two points of Manchester City (the Blues later beat Queens Park Rangers 3-2 to restore a five-point advantage), albeit without displaying much of the artistry and adventure that has characterised so many of Sir Alex's sides down the years. The tributes came from elsewhere, though. A giant banner was hung the length of the Stretford End, supporters received commemorative tribute magazines and Sir Alex himself was paraded before Old Trafford before kick-off, entering the pith through a guard of honour formed by the two teams.

Then came a bombshell: the club, for the first time in the stadium's 101-year history, had taken the extraordinary step of renaming one of its stands after an individual. Fittingly, Old Trafford's grandest structure, the hulking 26,000-capacity North Stand, is now known as the Sir Alex Ferguson Stand.

Of course, all this pomp and pageantry was just a prelude to the main event: a Barclays Premier League fixture the Reds  were desperate to win. The contest began badly for Sunderland striker Conor Wickham, though, who appeared to twist his ankle in a freak off-the-ball incident before even 60 seconds had elapsed. His afternoon was over barely after it had begun.

Fellow Black Cats forward Nicklas Bendtner then forced the first save of the game, placing a low shot to countryman Anders Lindegaard's right. The Reds goalkeeper, making only his second league appearance, was equal to the test and gathered the ball at the second attempt after stretching to parry the initial shot.

United took far longer to settle and were too often wasteful with possession in the final third. In fact, it took until the 31st minute to muster a shot on goal, Wayne Rooney blasting straight at Keiren Westwood in the Sunderland goal.

Little improved soon after, although the Reds did have a half-hearted shout for a penalty (correctly) turned down when Sebastian Larsson bundled Chicharito to the ground after Darren Fletcher's neat pass had sent the Mexican through on goal.

Summer signing Phil Jones almost opened his United account in spectacular fashion when he volleyed a bouncing ball just over the bar from 18 yards. He then combined well with Nani down the right in a move that ended with Westwood making a sharp save down to his right to deny the Portuguese.

From the resulting corner, the Reds took the lead in first-half injury time, although there was plenty of doubt over who should be credited with the goal. Danny Welbeck wheeled away in celebration, while Wes Brown stood disconsolate on the edge of the six-yard box. What was clear was that Nani's set-piece had ended up in the net after Welbeck and Sunderland's central defensive pairing had challenged for the aerial ball.

The goal may have sent United into the break 1-0 up and spared Sir Alex's men the full force of a famous “hairdryer” team-talk, but the boss will no doubt still have issued a few stern words. After all, his side had been off the pace for long periods in the first half.

Happily, the Reds did look brighter after the interval. Nani blasted a 30-yard free-kick just wide of the post and Ji-sung Park posed Sunderland's left side plenty of questions with some direct running. But it was another corner that almost yielded a second goal. This time, another former Red, Kieran Richardson, headed off the line to deny Hernandez.

Then came a moment of extreme controversy. A curling cross was whipped into the box towards Sunderland substitute Ji Dong-Won, Rio Ferdinand and Nemanja Vidic. There was certainly contact with a hand and referee Lee Mason blew his whistle. First, on what appeared to be the advice of his assistant, he pointed to the penalty spot. But United defenders were livid and argued it had been Dong-Won's hand – not one of theirs – that had affected the ball's flight. So Mason consulted his assistant on the touchline and, after a brief discussion, motioned instead for a Reds free-kick.

Old Trafford breathed a sigh of relief and, but for the heroics of Westwood in the Sunderland goal, the home side almost doubled the lead moments later. First Westwood flung himself to his right to parry Rooney's powerful shot. Then, when Patrice Evra looked to tuck the follow-up into the roof of the net, the Manchester-born stopper somehow reached skywards to tip the ball over the bar and out for a corner.

Unfortunately for Sunderland, though, it was another Mancunian playing for the Black Cats, Wes Brown, who ended up having the biggest impact on this game.

Anders Lindegaard
Only forced into one save in the match. Otherwise, his contribution came mainly via accurate distribution with his feet.

Phil Jones
Another top peformance from the teenager. Seemed to relish the physical battle and almost scored with a rasping shot from 18 yards.

Nemanja Vidic
Great to see him back alongside Rio, although oddly on the right side of defence. Dominated in the air, particularly in the last 15 minutes.

Rio Ferdinand
A solid performance and a message to any critics who's dared to write him off in recent weeks.

Patrice Evra
Rarely challenged in a defensive capacity so was able to get forward and join the attacks. Foiled from close range by a fantastic save in the second half.

Nani
Struggled to get going although his brilliant one-two with Jones led to the corner - which he took - that United scored from. A bigger threat in the second period.

Darren Fletcher
Showed industry and endeavour and tracked back when needed. Sent Hernandez clean through in the first half but the Mexican was well tackled.

Ji-sung Park
As hard-working as always, he hustled and harried Sunderland's defenders throughout. Made some strong runs down the left in the second period.

Danny Welbeck
Did his best while stationed out on the left wing in the first period and was involved in the goal as he jumped to meet Nani's corner.

Wayne Rooney
Deployed in midfield again but unable to exert as much influence as he did in midweek. Brilliantly denied by Westwood after the break.

Javier Hernandez
Worked hard up front but was given little service for the majority of the game. Unlucky to see a close-range header cleared off the line.

Dimitar Berbatov (on for Welbeck)
Supported Hernandez up front but had little service and no clear sights at goal.

Michael Carrick (on for Park)
Helped shore up the middle of the park just as Sunderland were gaining a foothold. Teed up Hernandez at the other end.

Fabio (on for Fletcher)
Not on long enough to make an impact.