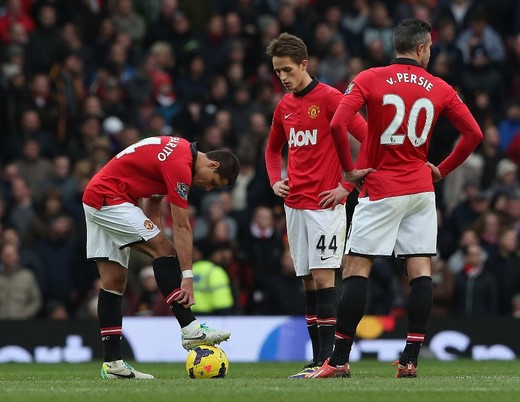 Manchester United slipped to a second home defeat in four days as Yohan Cabaye's second-half goal gave Newcastle United their first win at Old Trafford since 1972. After an uneventful first period, United had started to pose Newcastle problems in the early stages of the second half when a swift counter-attack from the visitors culminated in Cabaye slotting home Moussa Sissoko's pull-back.
David Moyes made seven changes to the side beaten by Everton on Wednesday, with Robin van Persie the most notable returnee, coming in for the suspended Wayne Rooney. The Dutchman was given little room to shine, however, in an attritional first period completely at odds with the traditionally open, exciting fare this fixture is renowned for. Any United forays - usually conducted through the lively Adnan Januzaj - met their end at the obdurate defensive work of the visitors, with Mike Williamson and Fabricio Coloccini immovable. Newcastle's noteworthy efforts were condensed into two Mathieu Debuchy chances, with David De Gea equal to both a stinging shot and a powerful header.
In the early stages of the second half, however, United belatedly began to work Tim Krul. The Dutchman first repelled Chicharito's powerful low shot with his legs, then plunged to his right to clutch Januzaj's neat volley. Krul was beaten by Patrice Evra's header on 55 minutes, but the Frenchman's effort hit the inside of the Newcastle post and was unwittingly knocked away from goal by Vurnon Anita's hand.
Just as United were tightening their grip on the game, Newcastle struck on the counter-attack. Evra's headed clearance ricocheted off Sissoko and fell for the Magpies forward, who motored into the area and squared for Cabaye to slot a low finish past De Gea, via a slight deflection off Nemanja Vidic. Moyes introduced Premier League debutant Wilfried Zaha and Anderson to try and rescue the game, and although van Persie had a header correctly disallowed for offside, United came no closer to doing so than when Zaha's curling effort flashed wide of Krul's far post.
The Match Newcastle nullified United's attacking threat for much of the game, bar a 10-minute spell just after half-time. David Moyes' men struggled to break down a disciplined visiting defence, while Newcastle's midfield three snapped about the field to ensure the Reds were unable to build any rhythm. Counter-attacks were always the visitors' likeliest route to pinching any more than a point, and Yohan Cabaye took one such opening when it fell his way. The goal galvanised the Magpies and rocked United, who were unable to fashion any clear chances to restore parity thereafter. 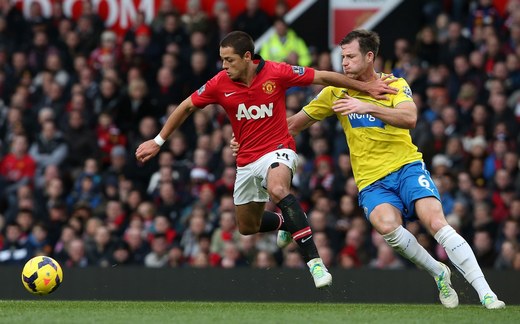 Goals When Patrice Evra's defensive header struck Moussa Sissoko, the Reds defender was completely out of the game and the Newcastle forward had time and space to advance before picking out Cabaye, unattended and onrushing, for a calm finish past De Gea.
Star men In the first half, Adnan Januzaj caught the eye with some typically exciting play, but even the youngster faded in influence as Newcastle tightened the shackles on United's attackers.
Sub-plots Robin van Persie's return appeared timely, with Wayne Rooney serving a one-match suspension, but the Dutchman was up against a central defensive pairing on top of their game. Even then it looked like he had managed to nod United back on level terms late on, only for an assistant's flag to correctly rule him offside.
Opposition Newcastle lined up in a 4-3-3 formation, with their tenacious midfield trio of Cabaye, Anita and Tiote charged with imposing themselves physically. Prior to defeat in their previous outing, at Swansea, the Magpies had won all four games in November and were full of confidence and resolve, plus a counter-attacking threat which ultimately yielded victory.
Move of the match Patient possession play early in the second period culminated in Nani brilliantly releasing Rafael down the right, and the Brazilian's devilish cross was almost turned past Tim Krul by Mike Williamson before Mathieu Debuchy showed the admirable confidence to nod it back to his goalkeeper from inside the six-yard box.
In the stands A sombre mood reflected a muted spectacle before the break, but United's supporters found their voices during a sustained spell of pressure from the Reds early in the second period. That was curtailed by Cabaye's goal and, thereafter, only the jubilant away supporters were audible.