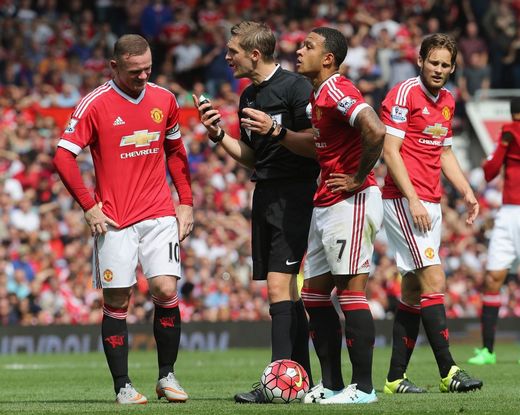 Manchester United were forced to settle for a point as Louis van Gaal's former Dutch goalkeeper Tim Krul left his old manager frustrated and earned Newcastle United a goalless draw at Old Trafford.
Krul made a host of top saves, including a brilliant one to deny Juan Mata in the first period and an even better one after the break to prevent substitute Javier Hernandez from snatching a winner.
Van Gaal made just one change to the side that began the 3-1 Champions League play-off win over Club Brugge with Bastian Schweinsteiger starting his first competitive match for the Reds since his summer move, in place of Michael Carrick. 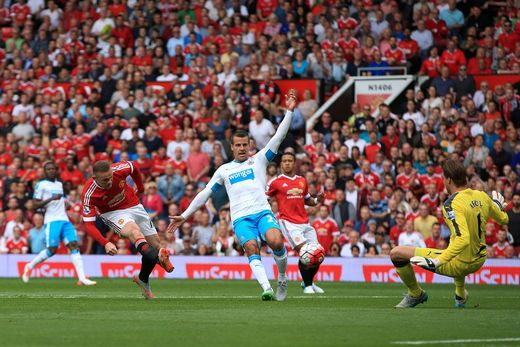 Newcastle, who arrived in M16 with just one point to their name for the season and on a run of seven consecutive defeats on the road across the end of last term and start of this, were on the back foot almost straight away and were lucky not to be a goal down after four minutes when Wayne Rooney had the ball in the net, but was flagged offside despite replays suggesting otherwise.
Rooney took aim soon afterwards, following nice combination play with Schweinsteiger, but his low drive was claimed by Krul. The Newcastle goalkeeper was also on hand to save Mata’s free-kick on 12 minutes and he denied the Spaniard again a few minutes later as he clawed his shot away low to his left. Rooney was next to have a go as the wave of United attacks continued but Krul was there once more. 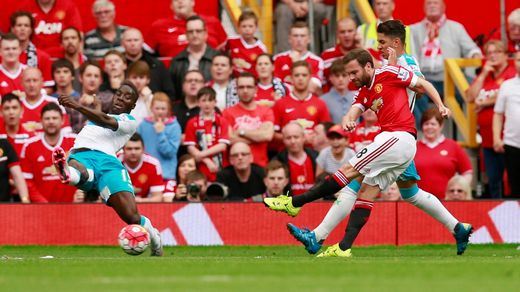 Having barely been in the match, the visitors went within inches of going ahead when Aleksandar Mitrovic rose to send a superb header on to the United bar with Sergio Romero well beaten. At the other end, Memphis Depay found himself through on goal, but his touch around Krul took him too wide and the Magpies cleared the danger.
Thereafter, clear-cut chances were few and far between, despite both sides looking dangerous around the box.
HALF-TIME STATISTICS
Possession: United 60% Newcastle 40%
Shots: United 9 Newcastle 6
Shots on target: United 6 Newcastle 0
Corners: United 3 Newcastle 3
The second half began in the much the same fashion the first had finished. Carrick came on for Schweinsteiger just before the hour mark, while Chicharito replaced Januzaj soon after, as the Reds looked to turn up the heat on Steve McClaren’s men. 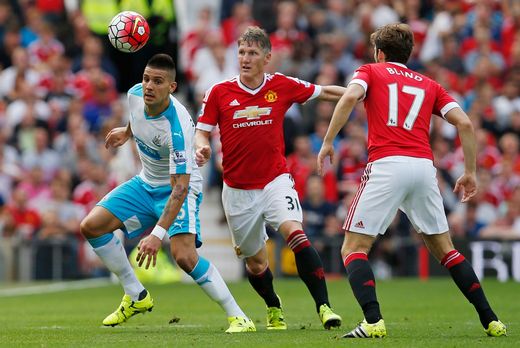 Chris Smalling was unlucky not to connect with a corner when he had an opening, while a Rooney effort was blocked and a Mata volley flew over. Schneiderlin’s lovely backheel put Shaw through after the full-back cut in from the left wing, but Krul was there to block his shot.
Krul, who had famously been van Gaal’s penalty hero during last year’s World Cup, continued to thwart the Reds, with the best save of the lot coming when Mata’s shot rebounded to put Chicharito through on goal, but an outstretched leg from the Dutch stopper kept the score goalless. 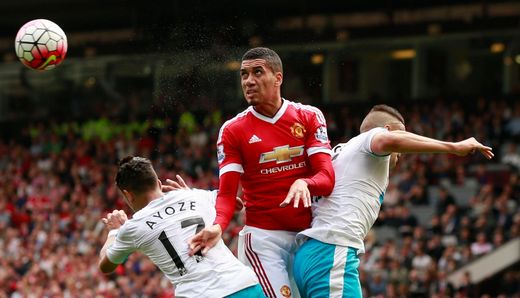 As the clock ticked down to 90 minutes, Fabricio Coloccini blocked a goalbound Antonio Valencia shot and a crazy end to the game almost saw both sides win it when Smalling's header from Memphis' corner hit a post, before Newcastle went straight up the other end and substitute Florian Thauvin went within inches of turning home a cross from close range.
Carrick's deflected shot in the dying seconds looked to be flying in, but it wasn't to be for United who had to make do with one point rather than the three which were deserved.
FULL-TIME STATISTICS
Possession: United 70 Newcastle 30
Shots: United 20 Newcastle 7
Shots on target: United 8 Newcastle 0
Corners: United 11 Newcastle 5

Louis van Gaal: "We can be satisfied with the performance, not the result. We didn't reward ourselves. We created a lot of chances and were unlucky."

Chris Smalling: "We’ve got another game on Wednesday so we've no time to feel sorry for ourselves. We can learn from it and if we create that number of chances in the next game I think we’ll score the goals.”

Luke Shaw: "I’m sure we'll start scoring many goals soon. We’ve got so much quality up front that it’s only a matter of time before someone puts one away and we’ll be flying again."