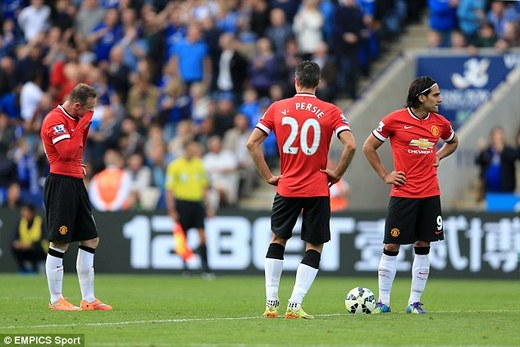 Manchester United twice threw away a two-goal lead to slip to a stunning defeat at Leicester.
Robin van Persie and Angel Di Maria put the Reds ahead within the first 16 minutes, before Leonardo Ulloa pulled one back almost immediately. Ander Herrera made it 3-1 early in the second half, but a controversial penalty, converted by David Nugent, sparked an astonishing turnaround. Esteban Cambiasso, Jamie Vardy and an Ulloa spot-kick condemned United to a defeat that seemed almost impossible when Herrera had scored.
Louis van Gaal made one change to the side that had eased to victory over QPR, handing Radamel Falcao his first start in place of Juan Mata. Wayne Rooney moved to the top of the midfield diamond in place of the Spaniard, and the same back four meant that Luke Shaw would have to wait for his United debut.
The Reds were on the back foot in the opening stages against a pumped-up home side, but on 10 minutes Kasper Schmeichel was the first goalkeeper called into action. Di Maria’s perceptive pass sliced through the Leicester defence, and van Persie’s stabbed effort was parried away by the Dane. 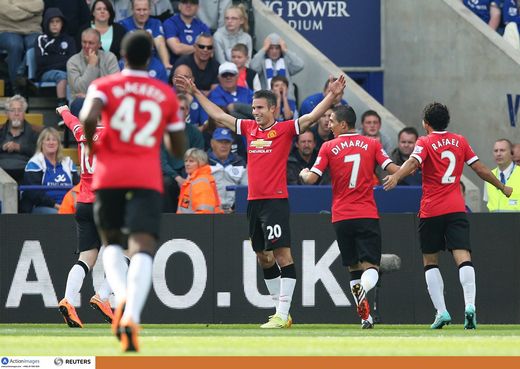 But the Dutchman did not have to wait too long to open his account for the season. Falcao raced away from ex-Red defender Ritchie De Laet to deliver a pinpoint cross that van Persie nodded past Schmeichel, the ball taking a deflection off Liam Moore’s shoulder on the way to put United ahead after 13 minutes. 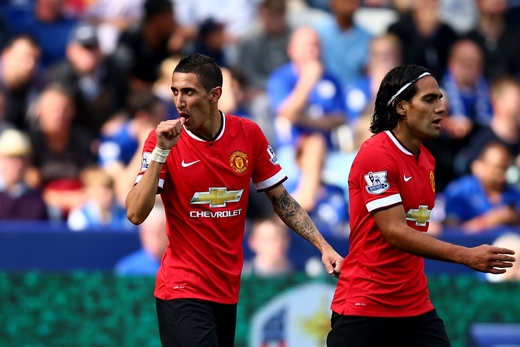 The celebrations had barely died down when Di Maria doubled the lead with a magnificent individual effort. The Argentinian, receiving a pass back from Rooney, raced into the Foxes’ area and without breaking stride he lifted the ball over a stranded Schmeichel for a truly sublime second goal in as many games.
However, the hosts hit back within seconds of the restart, Vardy managing to cross from the right just as the ball looked to be heading over the byline and Ulloa, rising between Jonny Evans and Rafael, headed the ball powerfully past David De Gea.
The game’s end-to-end nature continued for the rest of the first half, but United’s pace on the counterattack, in particular from Di Maria, kept Leicester at full stretch. Marcos Rojo spurned a chance from a corner when he nodded the ball over from inside the six-yard box, and Falcao was just short of getting his head to a teasing low cross by the on-song Di Maria. But there was also the worrying sight of Evans being pulled out of the action with an injury after just half an hour, the Northern Ireland international being replaced by Chris Smalling.
The ploy of playing Rooney behind the front two strikers had worked well, and it came close to adding to United’s lead early in the second half. The skipper looped the ball over to Falcao, who with one touch brought it down before flicking it past past Schmeichel onto the crossbar with the next. 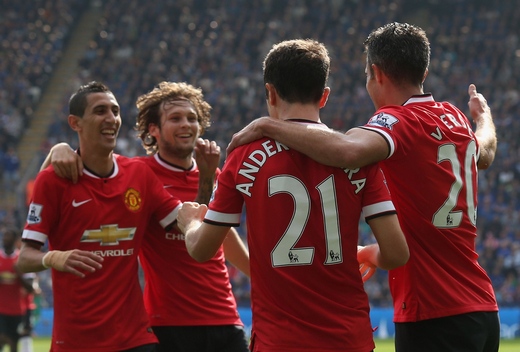 The Colombian’s effort would have been another for the end-of-season DVD had it gone in, but there was no doubt about Herrera’s cheeky back-heel that made it 3-1 after 57 minutes. Schmeichel parried a cross to van Persie, whose pass allowed Di Maria a shot that the Spaniard diverted deftly past the wrong-footed Leicester keeper.
But the two-goal lead was reduced in controversial circumstances when referee Mark Clattenburg adjudged that Rafael had illegally barged over Jamie Vardy inside the area. The Brazilian right-back had been bundled over by the Leicester number nine just seconds earlier, but David Nugent ignored the clamour to slam the ball into the middle of the net past De Gea.
The hosts then drew level when United's defenders failed to clear the ball on the edge of the area, and Cambiasso latched onto a rebound off Vardy to slam the ball home. 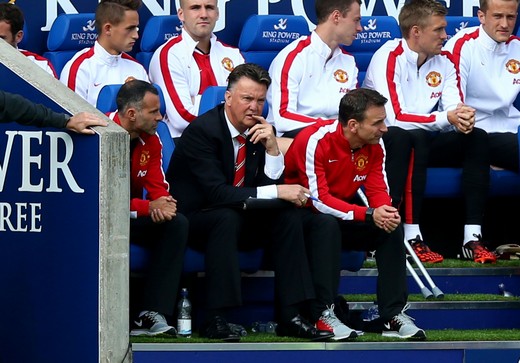 The turnaround shook the Reds, but worse was to follow when Mata, on for Di Maria, lost possession by slipping in Leicester's half. The ball was upfield in the blink of an eye, and Vardy received De Laet's pass in a gaping hole in the middle before slotting home to put the Foxes ahead for the first time in the match.
An afternoon to forget was sealed when Blackett fouled Vardy, earning a straight red card before Ulloa converted the spot-kick to confirm Leicester's victory.