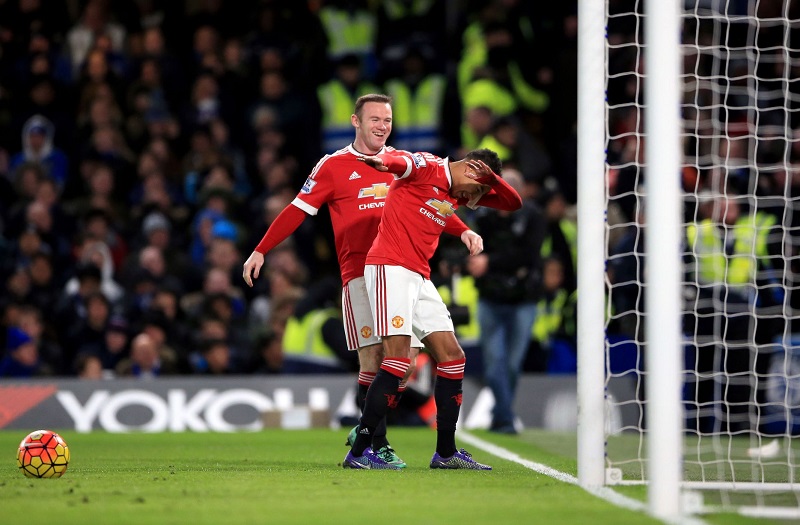 Manchester United secured an entertaining 1-1 draw at champions Chelsea on Sunday, although one point could easily have been three for Louis van Gaal's unfortunate Reds.
Jesse Lingard scored the biggest goal of his flourishing career with a superb effort that flew past the impressive Thibaut Courtois, but a potential victory was cruelly taken away by Diego Costa's 91st-minute leveller. The result leaves United fifth in the Barclays Premier League and six points behind fourth-placed Manchester City, yet the spirit that underpinned this performance suggests progress can be made. 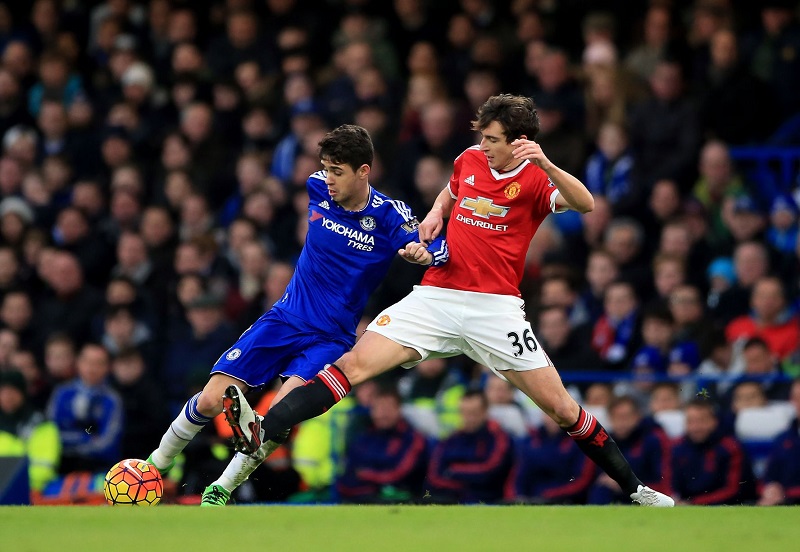 Louis van Gaal named an unchanged XI after admitting he “did not have an argument” to rotate following the convincing 3-0 win over Stoke City in midweek. The manager will have been pleased by his team’s start, too, after the Reds earned six corners in the opening 20 minutes and registered three shots on target through Cameron Borthwick-Jackson, Michael Carrick and Anthony Martial.
The vociferous Costa, making his first career appearance against United, headed over for Chelsea on 26 minutes and Nemanja Matic nodded at goal to force a fine save from David De Gea moments later. Costa and Oscar also missed the target from inside the penalty area just after the half-hour mark as the first half became much more competitive following a one-sided opening. 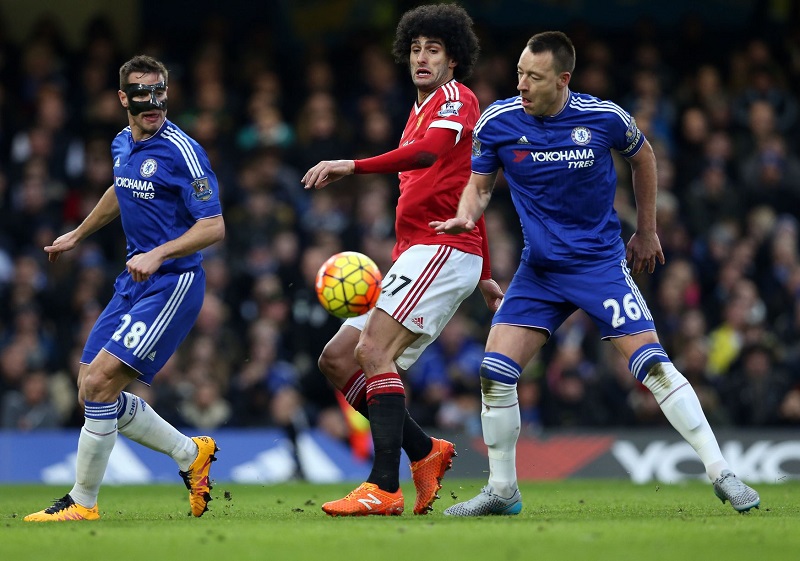 Marouane Fellaini lost his marker to head wide of the left post on 40 minutes before an excellent cross from the industrious Matteo Darmian rolled across the entire six-yard area without anybody obliging the invitation to score past a stranded Thibaut Courtois. Daley Blind then survived a late penalty scare in the closing seconds when his hand collided with a John Terry shot from eight yards.

POSSESSION: Chelsea 39% United 61%
SHOTS: Chelsea 6 United 8
SHOTS ON TARGET: Chelsea 1 United 3
CORNERS: Chelsea 3 United 10
Wayne Rooney began the second half by heading tamely at goal from a Lingard cross, but the in-form captain mustered a much more dangerous effort shortly afterwards when his low strike from around 20 yards was clawed away by Courtois. After Martial had dragged a shot wide, the Belgian goalkeeper was required again to parry Lingard’s guided effort before blocking Rooney’s follow-up. 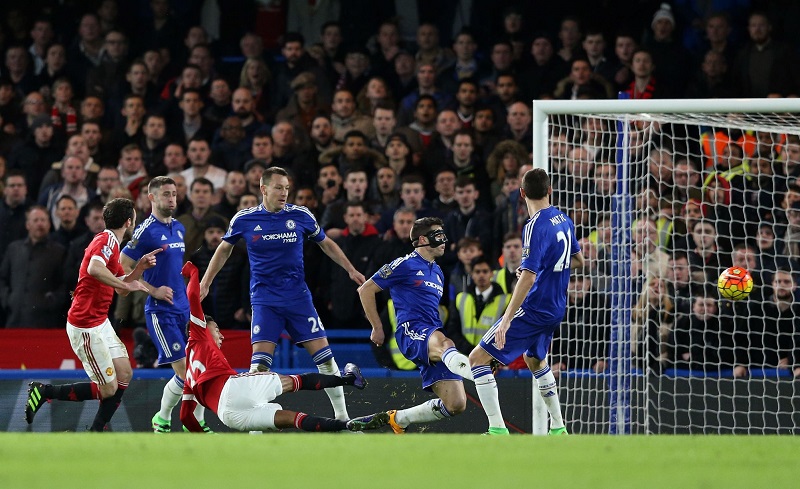 The match was temporarily halted on 55 minutes when young Chelsea defender Kurt Zouma suffered a serious-looking injury when landing from an aerial challenge that forced him to be stretchered off. United scored upon the restart and in brilliant fashion as Lingard superbly turned on the ball inside the penalty area and shot into the top corner, opening the scoring for the second time in a week following his headed effort against Stoke in midweek. It was the 23-year-old's fourth strike in 19 senior outings this season.
The strong right hand of De Gea maintained United’s clean sheet on 67 minutes, when he displayed his enduring class by pushing a powerful volley from Branislav Ivanovic over the crossbar. The Spain international then denied his compatriot Cesc Fabregas with another outstanding save, this time using both hands to parry a thumping close-range effort away from the top corner. 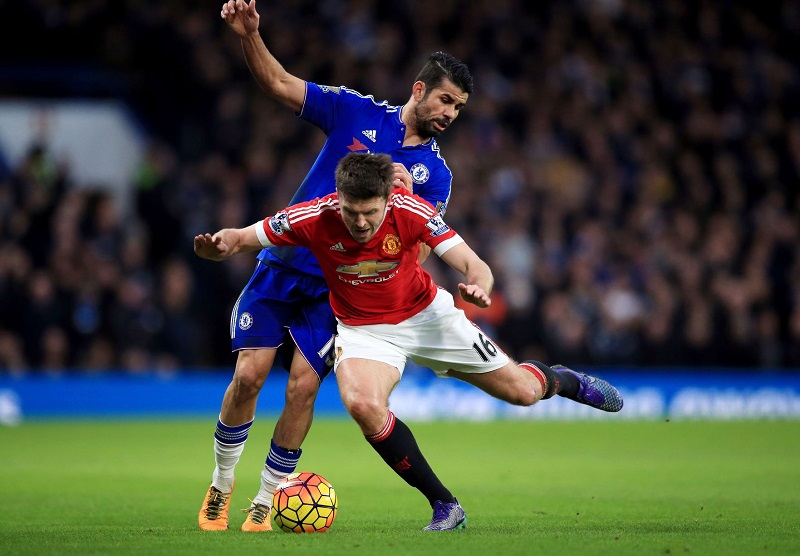 United fought for the win but frustratingly conceded in the first of six added minutes, when Costa latched on to a Fabregas pass to round De Gea and finish into a empty net, salvaging a point for Chelsea. The powerful striker almost bagged a winner just seconds later with a low shot that was saved once again by De Gea, whose performance was unquestionably crucial to what was eventually a hard-fought draw.

Van Gaal: "I think we played a superb game until the last quarter. We did not keep the ball and we did not play the attack in the way I think we have to do. We were unlucky that we got the goal against us, it was unbelievable. We did not reward ourselves."

Mata: “We played very good football. Coming here to Chelsea isn’t easy, but particularly in the first 30 minutes and in the second half we played well – we had it so close. But Chelsea were always pushing and they scored a late goal and we didn’t have any time to get another goal. It’s frustrating.”

Lingard: "We played the majority of the game well, and to concede so late feels like a defeat. We’ve got to move onto the next game now. The goal was just instinct to turn and hit it. I was glad that it went in but it was the three points that we wanted."

#MUFC secured an entertaining 1-1 draw at champions Chelsea on Sunday, although one point could easily have been three for Louis van Gaal's unfortunate Reds.

Posted by RyanGiggs.cc on Sunday, February 7, 2016