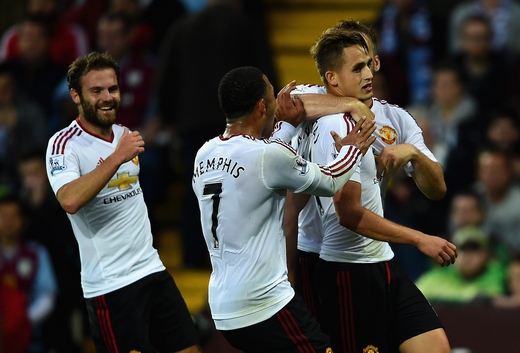 Adnan Januzaj justified his recall to Louis van Gaal’s starting XI on Friday by scoring the only goal in Manchester United’s 1-0 win over Aston Villa in the Barclays Premier League.
The Reds are now unbeaten in 20 top-flight matches at Villa Park in a run that stretches back to September 1996. The victory also means United have tallied six points from six available following two tricky opening fixtures, five points more than the total registered at this stage of the last campaign.
The match was notably moved to Friday night due to a heavily-policed event in Birmingham on Saturday and, although many fans were late to the stadium following traffic issues, most supporters at Villa Park appeared to enjoy the novelty of the change in schedule judging by the raucous atmosphere.
Van Gaal made just one change to his starting XI by selecting Januzaj in place of Ashley Young, with the Belgian forward playing in the hole behind Wayne Rooney, while new signing Memphis Depay performed out wide on the left, a position in which he excelled for PSV Eindhoven. 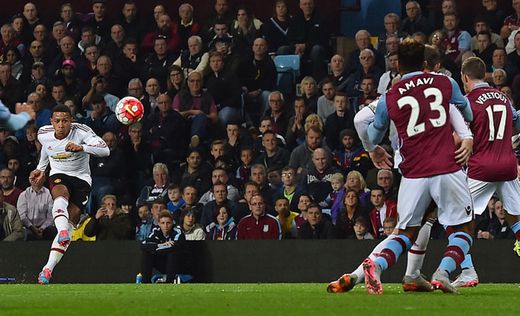 United created the first chance on 15 minutes as Memphis hit an inswinging free-kick that evaded all Villa defenders and bounced towards Morgan Schneiderlin at the back post, where the French midfielder shaped his body to glance an awkward header wide of Brad Guzan’s goal.
The Villa goalkeeper was called into action again moments later as he beat Memphis to an important 50/50 challenge. The Dutchman was active throughout the first half and created another opportunity for himself on 22 minutes when he drifted inside from the left wing to exchange passes with Rooney before hitting a deflected shot wide of goal. 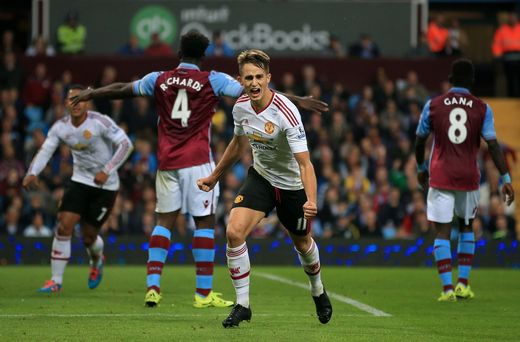 United dominated possession in the opening half an hour and deservedly broke the deadlock from an excellent passing move. It began with Januzaj switching the ball to the left and ended with the recalled Belgian latching onto Juan Mata’s through-ball to calmly round Micah Richards and slot a deflected finish into the bottom corner, vindicating the manager’s decision to start him at Villa Park. It was Adnan’s first competitive goal since the 4-0 win over Newcastle on 5 April 2014.
Neither manager made half-time changes but Villa played with much more urgency after the break and could have levelled when Jordan Ayew pounced on an unusually wayward pass from Mata and wastefully blasted a shot high over Romero’s goal. The Argentinian goalkeeper was then forced into his first real save on 55 minutes as he impressively grasped both hands around Gabriel Agbonlahor’s powerful header. 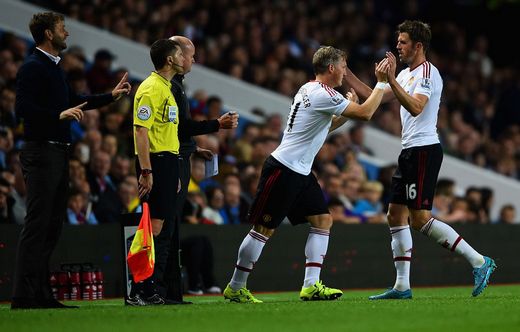 With Villa in the ascendancy and the home fans in fine voice, Tim Sherwood intervened and sent Rudy Gestede onto the pitch in place of former Manchester City midfielder Scott Sinclair. Van Gaal also made two changes on the hour as Ander Herrera and Bastian Schweinsteiger came on for Januzaj and Carrick, perhaps with a view to regaining control of an increasingly frantic match. 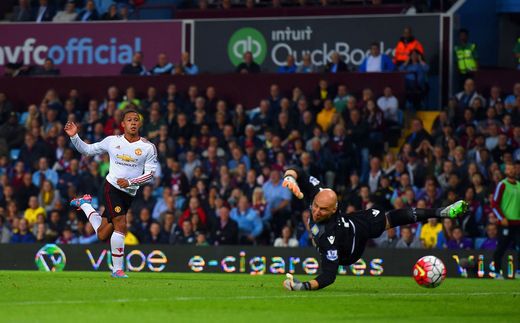 Memphis could, and perhaps should, have scored his first competitive goal for the club when he was put through by another delightfully accurate Mata pass, but the Dutch forward’s first-time shot flew just wide of Guzan’s left post before Ashley Young took his place on 82 minutes to the familiar sound of boos he receives at Villa Park, his old stomping ground.
In the end, despite Villa’s late push for an equaliser, United held on to another relatively straightforward win that will boost the players' confidence ahead of Tuesday’s UEFA Champions League play-off match against Club Brugge, an occasion that is of great importance to the club this season.

Adnan Januzaj justified his recall to Louis van Gaal’s starting XI on Friday by scoring the only goal in #MUFC’s 1-0 win over Aston Villa in the Barclays Premier League.