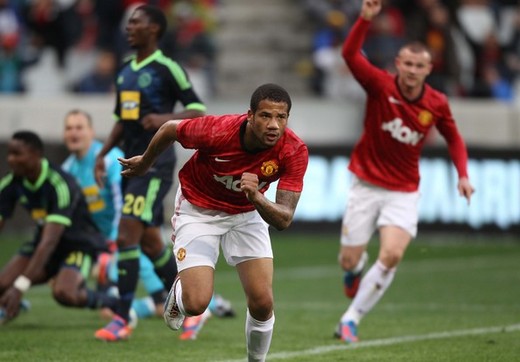 Portuguese winger Bebe fired home in injury-time to snatch a 1-1 draw and spare Manchester United's blushes in the Reds' second pre-season game of the summer.

In a contest that only sparked into life in the final five minutes, Ajax Cape Town pushed Sir Alex's men all the way and almost produced a sensational shock.

Substitute Alcardo Van Graan must have thought he'd won the game when he cheekily flicked in a corner on 85 minutes. But that only prompted a flurry of United attacks and, after chances for both Ryan Tunnicliffe and debutant Nick Powell went begging, Bebe arrived at the back post to smash home Marnick Vermijl's cross and secure a share of the spoils.

The dramatic finish at least went some way to erasing the memory of the previous 85 minutes. Torrential rain earlier in the day no doubt affected the playing surface, but the bigger problem for both teams appeared to be a lack of incision in the final third. The Reds' defence, largely unfamiliar with each other, also understandably lacked cohesion.

Summer signing Shinji Kagawa played 75 minutes and was solid if not spectacular in his first start. He played in an advanced midfield role, tucked behind Javier Hernandez, and showed a number of neat touches. He did, however, spurn a golden chance to open the scoring on the hour-mark when he headed wide after Hernandez found him unmarked just six yards from goal.

The Japanese international was nonetheless a hit with the people of Cape Town, who produced a carnival atmosphere at Green Point Stadium that was, at times, the equal of many top European grounds. Vuvuzelas were present, of course, but so were many of the songs sung regularly inside Old Trafford. And although the majority of supporters were decked out in the red of United, each of the home side's forward forays was also cheered.

Khama Billiat looked especially lively up front and provided Reds centre-back Scott Wootton with a stern test in the first 45 minutes. Billiat will have been disappointed when he dragged wide in the 20th minute and again later when he passed poorly with Ajax storming down the pitch on the counter-attack.

At the other end, United's only real chance of the first half came on 34 minutes when Hernandez met Wootton's cross with a firm header. But the Mexican could only watch as Ajax goalkeeper (and former Liverpool player) Sander Westerveld dived to his right to push the ball around the post.

Michael Carrick's probing pass rolled agonisingly across the six-yard box just before the interval - neither Hernandez nor Antonio Valencia could apply a finish - but in truth it was the home side who could hold their heads highest as they left the pitch at half-time.

The second period began brightly, with Valencia causing havoc down the right flank in the first 15 minutes. No clear-cut chances were created, however, until Kagawa nodded wide from close-range, the goal at his mercy.

With 22 minutes to play, Sir Alex made a quadruple substitution in a change that handed 18-year-old Nick Powell his first taste of Reds action, as well as valuable minutes to Bebe, Ryan Tunnicliffe and Jesse Lingard.

Ben Amos excelled on 75 minutes when he saved smartly down by his near post to deny Thembinkosi Fanteni from 18 yards. It was a moment that sparked a surge of confidence in the Ajax side, who continued to push forward in search of reward. That duly arrived when Van Graan backheeled the ball over Amos for what many fans inside the stadium must have assumed was the winner.

But United never give in and under intense late pressure the locals cracked as Bebe stole the headlines with a dramatic equaliser.