Nani is the key to United's success - Giggs 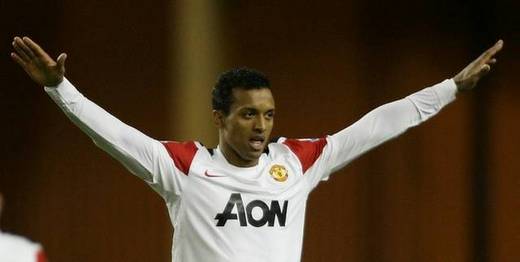 Veteran midfielder Giggs, who celebrated the 20th anniversary of his first-team debut last Wednesday, has hailed Portuguese winger Nani as the key to United’s chances of success against Liverpool tomorrow.

Nani has 10 goals in all competitions and 15 assists in the Premier League this season, more than any other player, and Giggs paid tribute to the 24-year-old, saying he has been United’s best performer.

“He’s been excellent,” said Giggs. “I think this season he’s obviously stepped it up. For me personally, as a winger you look at how many goals you’ve made, how many you’ve scored and what effect you’re having on the team.

“Nani’s probably been our most effective player this season because he’s made so many goals and scored so many important goals.

“So it’s great to see him improve, because he has all this talent and just needed to step up to the next level. He’s done that and will continue to do that.

“He’s a really good lad, a really good professional, he’s always on the pitch and he listens to you. So when you come across a player like that, you want to help them and want to see them improve.”

United will be without suspended skipper Nemanja Vidic and his central defensive partner Rio Ferdinand, who remains injured, although Patrice Evra - who came off at Chelsea - should be fit.

Sir Alex Ferguson cancelled his weekly press briefing yesterday in the aftermath of his FA improper conduct charge for critical comments about referee Martin Atkinson in a post-match interview at Chelsea.

Fergie, who will appeal against the charge, was critical of Atkinson after United’s 2-1 defeat at Stamford Bridge. Yesterday he refused to speak to the press, as well as MUTV, United’s own TV station which aired the incriminating interview with their manager.

But prior to being charged, Fergie did speak publicly and admitted the onus was on him as manager to lift his players and staff after two defeats in four Premier League games, away to Wolves and Chelsea.

“The role of the manager is to make sure the players are on the edge of their game all the time,” said Fergie.

“They’re human beings, individuals, and not every player is the same. Some players are self-motivated and can do that job themselves, others need it, some depend on it.

“Players are different species, they have a different way of operating and as a manager you have to recognise that and approach it on a case-by-case basis.

“That’s what we found after the Manchester City game. The atmosphere was good in the week leading up to the match, there was a concentration and focus in training that I was pleased with.

“Losing to Wolves wasn’t a result we expected and you have to recover from that. We recovered well. It was good that we were playing City in some ways, because it was such a huge fixture, a big derby. The players knew it was a big game and they delivered.”

The same principle will apply for the Liverpool game, one Fergie always describes as United’s biggest of the season, despite their arch rivals having fallen out of title contention this season.

“You remind the players of their responsibilities, that’s all part of the process,” said Fergie. “We can’t let a defeat pass without reacting ourselves as staff. That’s not our style.

“The players have to understand that we suffer as much as they do. It’s our job too, we’ve all prepared hard for the games and put in a lot of time and effort into preparing for matches.”