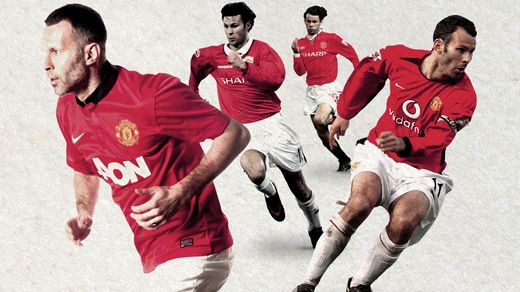 I vividly remember the buzz around Ryan Giggs, or Ryan Wilson as he was known back then, and a sense of anticipation as he pushed for first-team inclusion.

The newspapers had dubbed Wilson 'the new George Best' and my first sight of him came in an England Schoolboys international when he captained the team at Wembley. During that particular match, he was referred to as a Bryan Robson-type after playing in central midfield.

I awaited more progress from this willowy youngster but was then surprised to read of 'the new John Barnes' emerging at Old Trafford, according to one of the Sunday tabloids, and his name was Ryan Giggs. Initially, I mistakenly thought there were two of these wonder-kids in the youth system but, thankfully, one was far more than enough.

When he claimed the winner in the Manchester derby in his first start, even though it appeared to be an own goal by Colin Hendry, the hype appeared justified. Another thing that sticks in my mind is his full debut for Wales against Belgium. I turned the radio on midway through the first half to hear the commentator in raptures about what he was seeing. Kevin Ratcliffe, a battle-hardened championship winner with Everton in the 1980s, said he was thrilled to be in the same Wales team because he could tell his grandchildren that he played with Ryan Giggs. That struck a chord with me. This youngster was something special.

What has followed defies belief. If any of us think of what we were doing back in March 1991, it is hard to comprehend that Giggs was playing for United in the top flight way back then. Many supporters will only know of the team with Giggs in it. When he started out, we all dreamed of winning the league title that had eluded the Reds since 1967 and ending that hoodoo and Liverpool's dominance. Giggs has won it 13 times - only the Merseysiders and United, as clubs, have lifted the trophy more often.

Name for the future
"I awaited more progress from willowy Ryan Wilson but was then surprised to read of 'the new John Barnes' emerging at Old Trafford and his name was Ryan Giggs. Initially, I mistakenly thought there were two of these wonder-kids in United's youth system but just one turned out to be far more than enough."
- ManUtd.com's Adam Marshall

It is not as difficult to cast your mind back to 2008. Coming on as a substitute to score the clincher at Wigan Athletic to seal another title, with a trip to Moscow to relish on the horizon. It was on that memorable rainy night in Russia that he passed Sir Bobby Charlton's appearance record. For good measure, he also converted a penalty in the successful shoot-out with nerveless precision.

That would have been the most fitting of finales. A fairytale ending to a glittering career. Certainly, when he scored at Wigan, that was what I was feeling. I had even placed a bet on him to be last goalscorer as there seemed a poetic inevitability about it - even though he was named as substitute. I steeled myself for the end, knowing it would be emotional. Yet, five years on, he is arguably playing even better than he was back then. After another fine performance by Giggs this week against Bayer Leverkusen, Wayne Rooney commented that he had run out of things to say about his veteran team-mate. It is easy to endorse that view because there are not too many more accolades that can be paid to a man with 794 starts for United and a further 159 substitute appearances.

Let's continue to enjoy Ryan's talents while we can. Although he seems to be determined to prove us all wrong, he cannot go on forever and there will be a time when we come to terms with the fact that Giggs is no longer working his magic out on the field. Having been lucky enough to see so much of his enduring brilliance, he gives us hope that a player of similar class will one day rise through the ranks again. It is one of the reasons why we follow football so ardently. However, if we are to ever see somebody of his ilk, I'll be a pensioner at the very least by the time he matches Giggs' feats.

The opinions expressed in this article are personal to the author and do not necessarily represent the views of Manchester United FC.