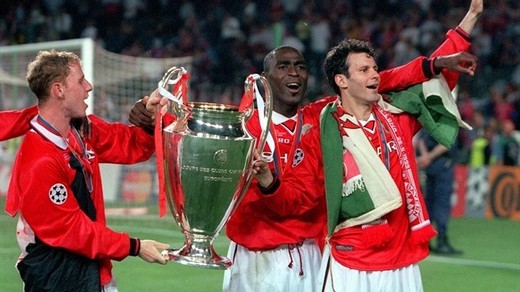 Two decades ago this week, a 17-year-old named Ryan Giggs made his Manchester United FC debut as a substitute in England's old First Division against Everton FC. Twenty years on and the winger is still going strong, breaking Sir Bobby Charlton's club record of 606 league appearances for United when he featured in Sunday's 3-1 loss away against Liverpool FC.

In recognition of this − the latest in a long line of achievements in a glittering career which, among others, has yielded 11 Premier League titles and two UEFA Champions League winners' medals − UEFA.com selects five great Giggs moments as a United player.

21 May 2008, UEFA Champions League final, United v Chelsea FC: breaking Sir Bobby's club record of 758 appearances
Giggs cemented his status as an all-time United great when he replaced another Old Trafford stalwart, Paul Scholes, in the 87th minute of European club football's biggest match. With the score 1-1 after extra time, the match went to penalties, where Giggs calmly struck what proved to be the decisive spot kick before Nicolas Anelka's effort was saved by Edwin van der Sar.

January 2011: being voted United's greatest player of all time
That the former Wales player topped a poll of supporters in the club magazine and on their official website ahead of such United luminaries as Eric Cantona, George Best and Sir Bobby to name but a few, says everything about Giggs's standing at Old Trafford. "When I got told I genuinely couldn't believe it," said Giggs on learning of the accolade. "There have been so many great players here."

Ominously for the rest of the Premier League, Giggs says he is "not finished yet" and "hopes to carry on for a while", something he confirmed last month when signing a one-year contract extension.

14 April 1999, FA Cup semi-final replay: United v Arsenal FC
United's famed treble of 1998/99 and what is widely regarded as the best goal of Giggs's illustrious career would never have happened had Peter Schmeichel not repelled Dennis Bergkamp's 92nd-minute penalty. Now in extra time as a result, with the score 1-1, Giggs collected Patrick Vieira's misplaced pass and embarked on a mazy run towards goal. With the France midfielder closing fast, Giggs danced beyond Vieira and in-between Lee Dixon and Martin Keown before rifling left-footed into the roof of David Seaman's net.

11 May 2008, Premier League: Wigan Athletic FC v United
Though not his most eye-catching of goals, it makes the cut due to its significance on an afternoon when the destination of the title was in the balance. Level on points with Chelsea at kick-off on the final day of the season, United knew victory would assure them of their tenth Premier League crown and 17th English championship overall. After Cristiano Ronaldo had eased the visitors' nerves with a penalty, Wayne Rooney's defence-splitting pass provided Giggs with a simple finish and the crowning domestic moment of United's season; for Giggs, greater acclaim would be forthcoming in Moscow ten days later.

25 February 2003, UEFA Champions League, second group stage: Juventus v United
While some may argue that his thunderous strike against the same team six years earlier is just as worthy of inclusion, Giggs's display at the Stadio Delle Alpi gets the nod because of his overall impact on United's 3-0 win. Having already scored one, Giggs set off on a run not dissimilar to that mentioned above in the FA Cup. Faced with Ciro Ferrara and Paolo Montero, he darts inside − taking both out of the game in the process − before sliding a shot across Gianluigi Buffon into the far corner.