Giggs: We never give up 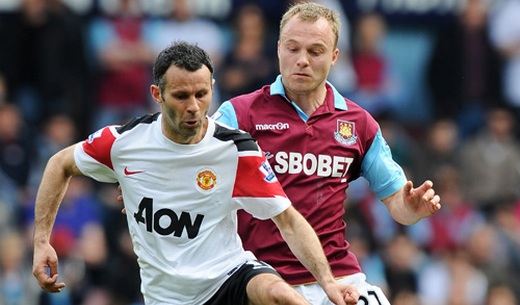 Ryan Giggs is urging his team-mates to keep going for seven more league games as his 12th - and United's 19th - league title draws tantalisingly closer with each weekend that passes.

The veteran winger aided the Reds' latest comeback victory, 4-2 at West Ham, from the unusual position of left-back. But it was otherwise a familiar story at Upton Park where Sir Alex Ferguson's league leaders rallied from 0-2 down to take three points home from East London.

"We don't give up. No matter what the score in the game, we keep going," said a proud Giggs in his post-match interview.

Onlookers may have feared the worst for United's players at the break with West Ham 2-0 up and Sir Alex coming down from his seat in the stands - this being the second match in his five-game touchline ban. But half-time wasn't 'hairdryer' time, according to Giggs.

"No, he was calm," insisted Ryan. "We'd played some good stuff in the first half. We just gave silly goals away.

"We were getting into good areas but the final ball wasn't good enough. We just needed to concentrate more in the final third. We felt if we kept creating chances and got a goal back we could go on and win it."

And so it proved, with Wayne Rooney scoring a hat-trick - including his 100th Premier League goal for United - and Giggs racing forward from left-back to supply the killer ball for Javier Hernandez to net the fourth and final strike of a stunning second-half recovery.

"I thought today we were brilliant all over the park," said Giggs. "But even when we've not been playing well we've been grinding out results. Hopefully now with seven games to go we can keep doing that."