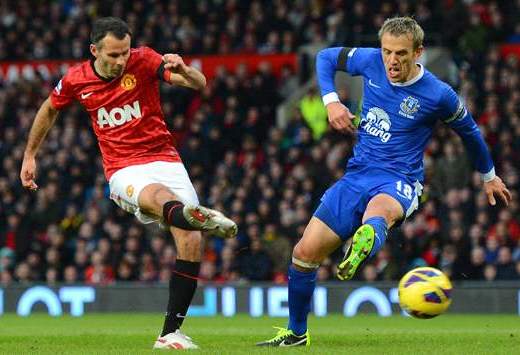 The veteran, who scored in Sunday's 2-0 win over Everton to ensure his record of netting in every Premier League season continues, has still urged focus from his team-mates

Ryan Giggs believes Manchester United have too much experience to let their 12-point lead over Manchester City at the top of the Premier League slip.

Sir Alex Ferguson’s men conceded an eight-point advantage last season as their rivals secured a last-gasp title win on the final day of the season.

But Giggs, speaking after Sunday’s 2-0 win over Everton, insists the squad have learnt from their mistakes of 12 months ago and has urged his team-mates to remain focused for the rest of the campaign.

"I think we've got enough experience but never take anything for granted," Giggs told reporters.

"You've just got to keep playing and playing well. The strength of the squad should see us there if everyone stays fit but you never know what happens. We've just got to concentrate and make sure that we do our job.

"We've been in really good form lately, we've got players on the bench and not even getting on the bench that would walk into any other team so the squad at the moment is really strong and we've got to keep that up till the end of the season."

Giggs grabbed his first Premier League goal of this season in the win over Everton - ensuring that he has now scored at least one goal in the league for the last 23 consecutive seasons.

The 39-year-old, converting in off the post from 12 yards after good work from Antonio Valencia and Robin van Persie, believes the early strike gave his team-mates a valuable boost against a side who they have failed to beat in their previous two attempts.

"Obviously it's an important goal which is the main thing, it set us off and after that we played some good stuff - we had to really against a really good Everton team," Giggs told Sky Sports.

"The main thing was obviously to get the result and the performance wasn't really important but I think we played well.

"We had to have the concentration, we knew what happened here last year against Everton. We know that they're a tough side so we knew if we concentrated we'd have a great chance."