Giggs taking nothing for granted after 21st vintage goal 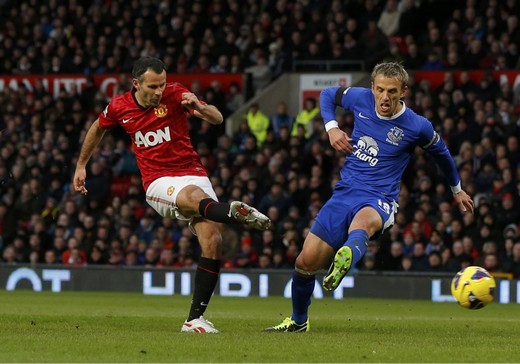 With 12 English league titles and 929 appearances for Manchester United under his belt, Ryan Giggs knows a thing or two about what is required in the closing stages of a season.

That explained the 39-year-old's steely calm after helping his side open up a 12-point gap over Manchester City in the Premier League on Sunday with a 2-0 home win over Everton.

The evergreen 39-year-old Welshman's goal meant he has now scored in each of the 21 seasons since the Premier League began and such was his contribution that there seems no reason why he will not play into his fifth decade.

First, however, there is United's 20th title to clinch and after watching City steal it in the final seconds of last season, there is an extra determination to make sure the crown is returned to the Old Trafford trophy cabinet.

United have won 12 of their last 14 games in the Premier League, drawing the other two, and they look unstoppable.

"We've been in really good form and we've got players on the bench or not even getting on the bench who would walk into any other team," Giggs told Sky Sports.

"The squad we've got at the moment is really strong and we've got to keep that up until the end of the season.

"We've got enough experience in the squad but you never take anything for granted. We've just got to keep playing well.

"The strength of the squad should see us there if everyone stays fit. But you never know what happens. You've just got to concentrate and do our job."

City manager Roberto Mancini all but conceded the title after his side lost 3-1 to Southampton on Saturday and unless they recover from that setback quickly their early April trip to Old Trafford could be the day when the title is handed back to their rivals.

"We have a 10 percent chance, 12 points is too much at this moment," Mancini said.

United face Real Madrid in the Champions League on Wednesday and Ferguson had planned to make a number of changes against Everton but City's defeat changed his mind.

"I was going to make about seven changes but when I got the result, I felt this was a more important game for us because it could give us a comfortable lead," Ferguson said.

"We can make changes later on in the season. It is realistic, we knew that if we got a good result today then we'd be in a positive position."