Giggs: Sir Alex left a huge void at United but decline was not inevitable 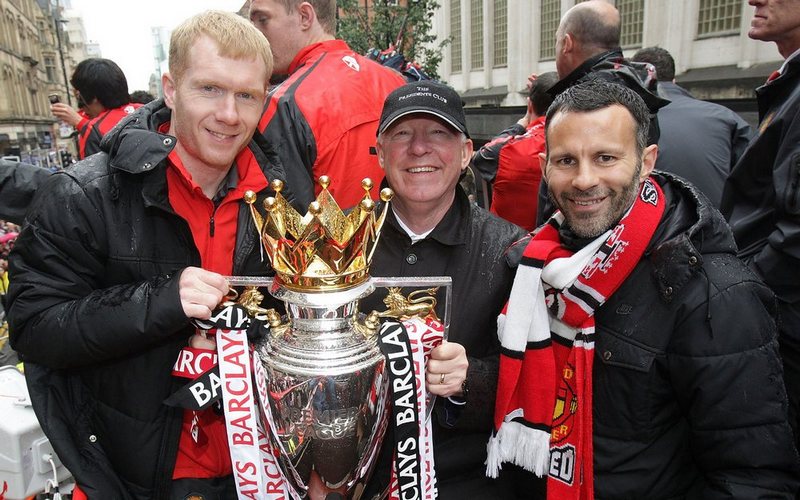 I spent 29 years of my life at Manchester United – schoolboy, apprentice, first-team player, coach, caretaker manager, assistant – and now, for the first time since I was 14, I can stand outside that great club and take stock of all those wonderful years.

My instinct as a footballer under Sir Alex Ferguson, the man who guided my career, was only to look forward – to the next training session, to the next game, to the next challenge. Life is different now, but I am enjoying a rest from the game – a year away from it to reflect and the opportunity to do something different. Giggs was a first-team player for 23 years at United. Credit: Colorsport/REX/Shutterstock

Playing for United, coaching at United, is pressure. Some people disagree. They think I should have challenged myself elsewhere. But where is bigger than Old Trafford? There are only a handful of clubs in the world where you are expected to win every game, and where every season there are new, talented, hungry young players trying to take your place.

I have always been a United fan. I was before Sir Alex Ferguson arrived at my mum’s house in Salford to sign me on my 14th birthday, Nov 29, 1987.

In those days I would get a ticket wherever I could at Old Trafford but mostly it was to stand on the old Stretford End. Now, for the first time, I can take my 10-year-old son Zach to watch United.

We sat in the directors’ box for the derby against Manchester City and I pointed out to him the places in the Stretford End I would watch from when I was his age.

I understand that for all the trophies I won under Sir Alex, the 13 titles, the two Champions Leagues, the four FA Cups, the four League Cups, life moves on fast at Old Trafford and the preoccupation of United fans is what has happened since Sir Alex retired in 2013. I was part of that, as player-coach to David Moyes, and then assistant to Louis van Gaal and I know that the last three years have been hard for supporters. I remember clearly where I was when I heard Sir Alex was stepping down as manager. He called me to tell me the evening before the club made the announcement. Although we talked a lot at Carrington it would be rare for his name to flash up on my phone out of hours and my first instinct in seeing it do so that evening was, ‘Oh God, what have I done wrong?’ Even at the age of 39.

He rang me to say that he was leaving. I suppose it could have happened any summer since his first retirement announcement in 2001 that he would quit in the summer of 2002, later reversed. But somehow it still felt like a shock.

When I finished talking to him that evening my overriding emotion was a great sadness. He had been part of my life for so long. It hit me at different stages over the next few months. When we went back for pre-season and he was not there, and then at Christmas. He was such a massive part of all our lives, organising, nurturing, driving us. In my latter years as a player at the club, he would call me into his office to tell me which of the games coming up he had in mind for me to play and to get myself ready. But he would also consult me, and others like Gary Neville and Rio Ferdinand, more than he had done in the past. We would be asked how we thought the team was training, how they were playing, about opposition, about selection. But don’t get me wrong, there was only one boss.

When David Moyes was appointed to replace Sir Alex he called me and asked me to be a player-coach. I was on my Uefa Pro Licence course at the Under-20s World Cup in Turkey and asked for some time to think about it. I assumed it would be a natural transition, It wasn't. I still wanted to contribute as a player and when you are a player you cannot focus on anything else.

I did not take any training sessions because David did that, and if not there was Phil Neville and Steve Round.

There was also a period after January when I barely played a first-team minute - a new experience for me. Of course, I knew that at 40 I was not going to be playing every week but I was fit and it was not as if the team were playing well. I found that hard. I remained professional but I cannot say I enjoyed it.

"My first instinct in seeing Sir Alex's number flash up that evening was, ‘Oh God, what have I done wrong?’ Even at the age of 39"

When I first met Louis we got talking and he asked me to be his assistant after just 30 minutes of conversation. I accepted and then he told me that he had one condition. I had to retire. In fact, he said he had made the decision for me. I was officially retired as a player as of that moment. As soon as he said so, it felt right. I learned more about coaching from Louis over the next two years than I thought possible.

He was completely thorough. Everyone in the team knew their role exactly and in the first season we made good progress. It was only last season that we lost our way although it would be wrong to say that was all Louis’ fault. We must all take our share of the blame. 'I learned more about coaching from Louis over the next two years than I thought possible'. CREDIT: GETTY IMAGES.

If you had asked me back in May 2013, having swept to our 13th Premier League title under Sir Alex with four games to spare, whether I could ever see a day when United would not at least be challenging for the title, I would have said there was no chance. Our strength as a team was too well-established. Financially, the club was huge. The stadium is the biggest club ground in the country.

All the things that, for example, Liverpool had failed to do in order to ensure their long-lasting success after the 1970s and 1980s, United had done. Yet it is already three years since United’s last title. This is not a club in trouble – not on the scale of what happened to United in 1974 when they were relegated - but the standards of what went before have not been maintained.

Sir Alex also went three seasons without winning a league title but there was a plan and he came back with three in a row between 2006 and 2009. That is the challenge for Jose Mourinho, to put the club back up on top of the English game but there are no certainties about the future for United as there once were.

"Where is bigger than Old Trafford? There are only a handful of clubs in the world where you are expected to win every game, and where every season there are new, talented, hungry young players trying to take your place"

I don’t believe that the decline, post-Sir Alex was inevitable. We won the Premier League by 11 points. There were so many winners in that team, so many great characters. Yes, the likes of myself, Rio, Nemanja Vidic, even Patrice Evra were coming to the end of our careers – although Patrice is still playing. But with the right recruitment we would have been gently phased out and replaced by young, hungry players with United’s winning mentality.

Instead, the recruitment in that first summer under David Moyes didn't go to plan. I don’t blame David. He came in without any of the inside knowledge about how the squad worked: when certain players needed resting, who was right for which game, who needed to be moved on and who needed to be encouraged. Those of us who had lived through it could help him a bit, but a manager has to acquire that knowledge over time. Recruitment under David Moyes in the summer transfer window did not go to plan. CREDIT: ACTION IMAGES.

Signing Marouane Fellaini so close to the deadline that August, the club’s only major deal in a summer when we needed two or three big names, suggested that things were not running smoothly. United had signed players late in the window before – Dimitar Berbatov in 2008 springs to mind – but this time was different. This time it was more of a panic.

Sir Alex might not necessarily have had a first-choice XI but he knew exactly what side was needed for each game, and would have that planned weeks ahead. David did not have that information. He started with a blank sheet of paper and for most of the first season we were chasing our best XI, or the right team for the game in question. The best run of form was the six straight wins in December 2013 when we had a reasonably settled side, and then injuries kicked in and things went wrong.

The training sessions under David were excellent. All the players enjoyed them and there was no downturn in the competitiveness that had always been a feature under Sir Alex. Perhaps something else was lost with his departure that was bigger – something that was harder to quantify but there nonetheless.

People say that Old Trafford under Sir Alex had an aura. I have no doubt we did but it is hard for me to define what that was because I only ever played for United. I know from talking to players outside United that it existed. And that a lot of the time while it would seem like they were competing with us, at the back of their minds they were thinking, ‘We just want to get out of here without getting a hiding’.

One moment that stuck in my mind was after an away game with Wales when we had barely got a touch of the ball. I got back to the dressing room and was complaining about how hard it had been just to get in the game. Gary Speed interrupted me. “That’s what it’s like playing at Old Trafford,” he said. That comment has stayed with me as an insight as to what it must have been like to be on the other side for all those years.