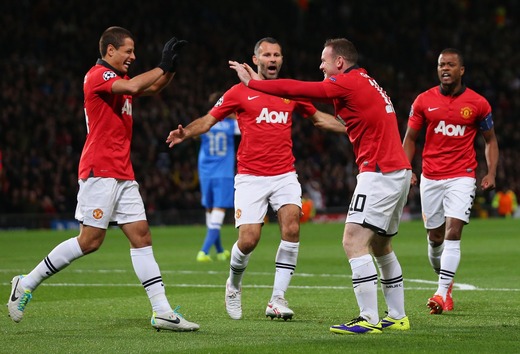 Manchester United benefited from the fastest goal of this season's Champions League group stage to complete a 1-0 home win over Real Sociedad at Old Trafford.

David Moyes's side should have won by more with Wayne Rooneyand Ryan Giggs producing a terrific level of performance, but were forced to settle for the only goal of the Group A tie from their first real attack of the night on 69 seconds.

Rooney - who turns 28 on Thursday - managed to ease himself past a couple of visiting shirts before knocking a shot against a post. The ball came back out to the Sociedad defender Iñigo Martínez, who seemed to panic before slamming his intended clearance into his own net.

With Robin van Persie given the night off to fully heal from nagging injuries, Rooney accepted the mantle of leading the line with some style. Some of the support work from Giggs and Shinji Kagawa was also a joy to behold as United moved top of their section with seven points from their opening three matches.

A win away from home against Sociedad in a fortnight's time should be enough to seal their spot in the last 16 with their Spanish opponents already out of contention without a point from their three outings.

2' - ROONEY RAMPANT: United move ahead. Brilliant start for the home side. Rooney hits the post, but Martinez bundles the ball into his own net. United ahead.

11' - ROONEY CONTINUES TO THRIVE: Rooney almost in for the second goal. Left footed volley, but Claudio Bravo does well to make the stop on that occasion.

18' - GIGGS OPENS UP SOCIEDAD: Giggs plays a lovely one-two with Rooney. Lovely delivery to the back post, but Hernandez is offside as he nods into the net.

26' - DE GEA REFLEXES: De Gea with a brilliant diving stop to nudge the ball over the bar from Haris Seferovic's blistering shot. Slight deflection off Evans so the save even more impressive.

38' - GRIEZMANN MISFORTUNE: Antoine Griezmann sees a free-kick fly over the wall and come back off a post. Brilliant effort from 25 yards. So unlucky.

52' - BRAVO BRILLIANCE: Jones sees a header beaten out by Bravo. Powerful header by Jones, but the keeper was equal to it.

60' - VALENCIA STRIKES POST: Valencia with a golden chance to kill matters off. Should have been the second, but his effort comes back off a post.

Manchester United have scored after 69 seconds, the fastest goal in this season's Champions League.

This is only the fourth time Manchester United have scored inside two minutes in a Champions League game - last one was Rooney v Bayern in 2010.

United have scored five goals from six shots on target so far in the Champions League this season.

United have failed to keep a clean sheet in their last nine games in the Champions League, their longest such run in the competition.

Manchester United have made more headed clearances than any other side in this season's Champions League.

TALKING POINT: How is David Moyes handling matters after Fergie's autobiography?Not too bad. At one point, the singing section at Old Trafford urged the manager to give them a wave. He obliged, but his side are surely destined to say hello to the last 16 of this tournament.

MAN OF THE MATCH: Ryan Giggs (Manchester United): Back to his very best. The man was a class act for United in an impressive team performance going forward. Doubts remain at the back.