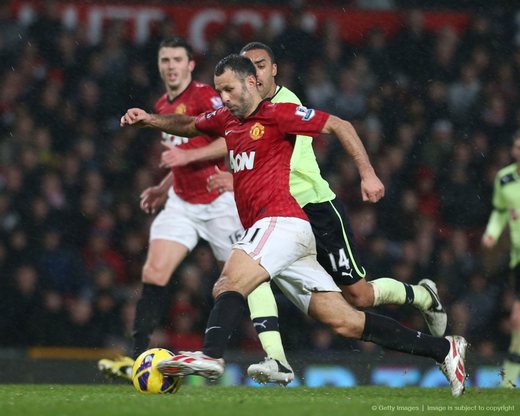 Ryan Giggs says the Reds have got to be happy with the way things have gone so far this season despite struggling to keep clean sheets.

Sir Alex’s men have conceded in all but four of their 27 games this term and have had to come from behind on countless occasions to pick up maximum points in games. Thankfully, a lack of clean sheets has not yet proved to be detrimental to United’s title charge with the Reds leading the way at the Barclays Premier League summit, seven points ahead of closest challengers Manchester City.

“Of course, there are always things you can improve on, but at the moment we can’t complain too much about where we are. I think we’ve got to be happy,” Ryan told ManUtd.com, PA Sport and Absolute Radio. “We’re through to the knock-out stages of the Champions League and we’re in a healthy position in the league. We’ve not had too many clean sheets and they are something we all want. But we can’t complain at where we are at the moment - we’re top of the league with a bit of daylight between ourselves and City.

“It’s a great team to play in,” added the Welshman. “The addition of Robin [van Persie] has brought that bit of class to the centre-forward position which already had the class of Rooney, Chicharito and Welbeck. We’ve got so many options and so many different variations that the manager can play up front.

“We always know that we’re going to get chances and once the momentum is with us we’re very tough to stop. I think that was the  case against Newcastle [on Boxing Day]. When you finish a game in the way we did that day, creating so many chances and scoring so late on, the confidence is there and you can’t wait for the next game. Hopefully we can take that into the West Brom match.”

Following the last-gasp victory over Newcastle, Giggs says it’s vital the players maintain their advantage at the top of the table, although the sixth-placed Baggies are sure to pose a tricky test at Old Trafford on Saturday.

“West Brom are probably one of the surprise packages of the season when you look at the position they’re in, but I’m not surprised to see Steve Clarke do a great job,” stated the 39-year-old. “He’s had a few assistant manager jobs but he’s taken control of the team now and taken them to that next level - they were already a very good team under Roy Hodgson. So it’ll be a tough game for us.

“I think they could stay around the top for a while. It all depends on injuries and suspensions with teams like West Brom. If they keep everyone fit then they’ll have a great chance. Confidence will be high and where they are [in the league] is not a false position – I’ve seen a few of their games and they’ve performed really well. Every year you have teams who surprise people and West Brom could be that team this year.”