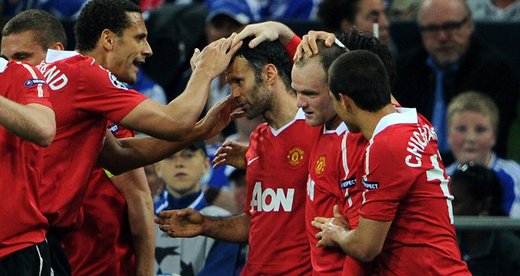 Manchester United veteran Ryan Giggs says he is not surprised at the return to form of Wayne Rooney.

After a difficult year which included putting in a transfer request earlier in the season, the United striker is hitting top form at the business end of the season.

His latest strike was against Schalke in the UEFA Champions League semi-final first leg in Germany and Giggs, who netted the other goal in the 2-0 success, heaped praise on his fellow scorer.

The Welsh wizard said: "I am not surprised at what Wayne is doing.

"The top players perform when the trophies are about to be handed out. They produce moments of inspiration when it matters.

"Wayne has done that time and time again over the years, so it was hardly a shock he was superb against Schalke."

United boss Sir Alex Ferguson has already earmarked the Welshman for an important job in the second leg of the tie, meaning Giggs will not be risked from the start against Arsenal in the Premier League at the Emirates Stadium on Sunday.

The two games will be followed by a clash with Chelsea on 8th May as United look to wrap up a record 19th league title.

"This is what you want," added Giggs. "The idea is to be playing big game after big game at this stage of the season because it means you are amongst the big trophies and going for the league.

"In that sense, we have got it exactly right. There are no issues. We have the squad to cope.

"I am sure the manager will make changes on Sunday but I also know the players who come in will be in good form.

"Hopefully we can get as good as a result and put on as good a performance as we did against Schalke."

While United are in pole position to progress to the Champions League final, Giggs refuses to underestimate the German outfit.

He said: "Obviously we are massive favourites.

"We have scored two away goals and we still have to play them at Old Trafford.

"But we have to be wary. Teams have underestimated Schalke before. We won't be doing that."