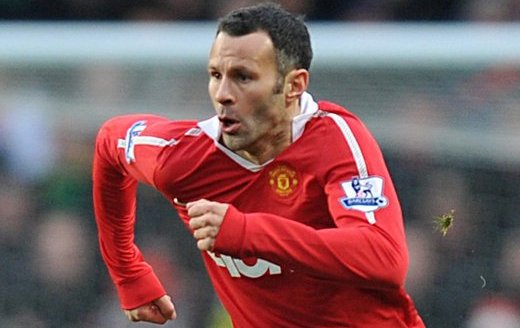 Ryan Giggs has exclusively told Sky Sports News that Manchester United will be pushed to the very last day of the season in the race for the Premier League title.

United are four points clear of Arsenal, who have a game in hand, while Manchester City and Chelsea lag behind in third and fourth place respectively.

City have not given up hope of recovering the 10-point gap, while Chelsea's controversial defeat of the frontrunners in midweek has given the defending champions renewed hope, albeit slim.

United now travel to bitter rivals Liverpool on Sunday, where Giggs will break his club's league appearance record if he plays, but he believes the title race is United's to lose.

"I think it's going to go to the wire, to the last game of the season," Giggs told Sky Sports News.

He added: "But it's in our hands at the moment and that's how we want it to remain."

Ferguson is famed for his hot temper in the dressing room and, although Giggs admits the 69-year-old has calmed down over the years, he believes his desire remains as strong as ever.

Giggs said of Ferguson: "He has mellowed but he's still got that desire and especially when you don't play well, when you know you don't produce the game you're capable of."