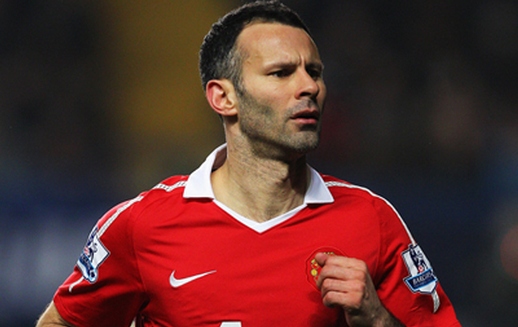 RYAN GIGGS has urged Manchester United to settle the title race once and for all by de-throning champions Chelsea on Sunday.

Alex Ferguson's men know a draw at Old Trafford would still leave them in pole position to claim a 19th league title.

But the Welsh veteran admits the United crowd will want them to blast Carlo Ancelotti's men out of contention.

Victory would leave the Red Devils six points clear of their closest rivals with two games to go - and the Blues knowing their season is over.

Giggs said: "Both teams realise that. We certainly realise that, and that's what we'll be aiming to do.

"We'll be trying to sew up the league as quickly as possible, starting Sunday.

"We have to go out and attack like Manchester United do at Old Trafford. The crowd wouldn't have it any other way.

"If we were sat back in the first 10 or 15 minutes, the crowd wouldn't have it. We've got to go and try and score goals and win the game.

"I think that is dangerous, to sit back against a team like Chelsea who can score goals against you."

United had a 15-point lead when they went to Stamford Bridge for their league clash back at the start of March.

It has now evaporated to just three, with both sides having a goal difference of plus-38. That means Ancelotti's men will go top on goal difference if they repeat last season's win at the home of their main title rivals.

But Giggs, 37, who is chasing a 12th title medal, says this is no time for United to panic.

He added: "That's how it goes sometimes. They're a very good team and they've hit a good bit of form.

"We knew they wouldn't be too far behind us, and that's certainly the case.

"You don't have to worry too much about what's happening. We could go back further when they were a lot of points in front of us.

"Yes, it's frustrating that it's come down to this but we can't worry about what has happened in the past.

Victory on Sunday would mean United would need a maximum of a single point from their final two games, against Blackburn and Blackpool.

If United can reclaim their crown, they can then focus all their attention on the Champions League final against Barcelona on May 28.

The memories are still fresh in Ferguson's squad of how they were soundly beaten by the Catalans in the same match two years ago.

Giggs rates that night in Rome as the second worst moment of his 20-year United career and would love the chance to put the record straight.

He said: "The worst I've ever felt was my first full season when we lost the league to Leeds but the European Cup final in Rome was a close second.

"That feeling of emptiness. We just didn't perform - that was the worst thing. At United you always pride yourself that when you lose a goal you react.

"But we didn't that night. I've never watched the game back. The manager has probably watched it six or seven times but I've not.

"It's the last game of the season and you'll never get it back and you're just gutted."

But Giggs hopes history could be on United's side as they famously won the trophy at Wembley back in 1968.

He added: "We know it's a tremendous stadium and steeped in history. United won the European Cup there and hopefully we can do it again.

"We've played in some great finals at Wembley, so to do it again in the Champions League, it doesn't get any bigger than that."