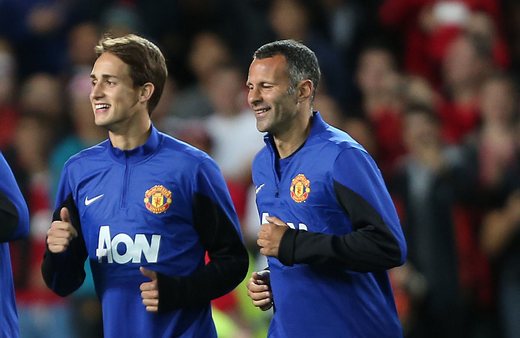 Ryan Giggs believes Manchester United have been invigorated by the rise of Adnan Januzaj, the latest product of the famous Old Trafford youth system.

Januzaj is the breakout star of the season so far, having made his Reds debut in the Community Shield in August before announcing himself to the world with a two-goal salvo against Sunderland earlier this month, prompting much excitement among supporters.

The 18-year-old has since signed a five-year contract with United and looks set to enjoy a long and fruitful career at Old Trafford. This is a pleasing prospect for Giggs, who notably followed a similar path into the first team as a 17-year-old in 1991.

As a result, the Welshman is perhaps the ultimate source of advice for Januzaj, but Giggs says now is not the time for dispensing wisdom.

"Adnan is doing okay at the moment," says Ryan. "The advice comes when things aren't going well for him. Young players have dips in form. That is inevitable. You just let him do what he is doing and enjoy it because everyone is enjoying seeing him progress and seeing what he has done in the last couple of games.

"What I got told was just to carry on doing what I had been doing in the youth team and for the reserves. That is why you are in the first team. To be fair, Adnan is a great lad. He wants to learn. He wants to get better. He wants to improve."

"That is great to see. He is a talent. As far as I am concerned he is at the right place. Hopefully we can see that talent develop. Having his future settled will help him," he told PA Sport. "He can forget about that now and just enjoy his football. We've seen it in his game.

"He is enjoying being around the lads. He has enjoyed learning and training with the first team, just like I did at the same age. You learn so much. It is great for the other players to see someone like that. It gives you a lift as well."