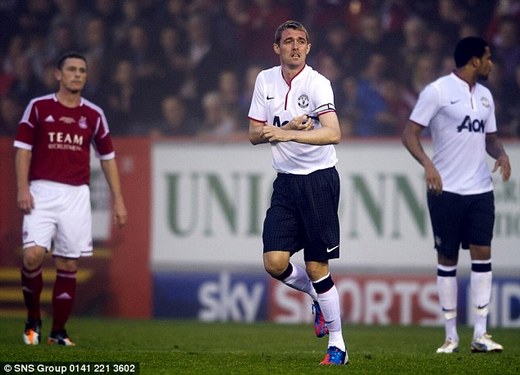 An Anderson goal was not enough for the Reds in an enjoyable benefit match for Neil Simpson that ended in a 2-1 defeat to Sir Alex's former club Aberdeen.

Jonny Hayes and Joe Shaughnessy scored for the SPL side but the biggest ovation of the night came when Darren Fletcher took over the captain's armband when coming on as a substitute in the second half following a nine-month lay-off due to a bowel condition. With both sides fielding players from yesteryear as the match wore on, it turned into an entertaining affair.

Pittodrie legend Simpson kicked things off before being instantly substituted and United soon took control, twice going close to scoring inside the opening 10 minutes. Bebe had a shot beaten out by Jamie Langfield and the keeper was relieved to see Ryan Giggs' right-footed effort clip the woodwork following a deflected cross by Bebe.

Nick Powell was heavily involved and lashed over the top before failing to divert a difficult diving header into an empty net when Langfield pawed at a cross-shot by Federico Macheda. When Paul Scholes smashed a deflected drive wide, it seemed inevitable the Reds would score first but the veteran midfielder was culpable for the game's opening goal.

After Rio Ferdinand calmly fed Scholes, he retreated inside his own box and dallied in possession, allowing Hayes to rob him and place a measured finish wide of De Gea. It was a rare error by the Old Trafford legend but the Dons almost went further ahead a minute before the break when Michael Paton headed over the bar from a short corner.

Mitchel Megginson worked his way past Anderson to fire wide as the hosts continued to press in the  second half, with Sir Alex introducing some older heads like Clayton Blackmore and Dwight Yorke. Powell should have levelled when, after a piledriver was deflected for a corner, he could only head Blackmore's pinpoint cross the wrong side of the far post.

Youngster Adnan Januzaj impressed with his willowy skills and managed a shot at Langfield but the Dons provided more attempts with Paton forcing a flying save out of Sam Johnstone and Megginson screwing off target when well placed. So it was no great surprise when Shaughnessy prodded his side further ahead after Johnstone lost a corner that was retrieved by Andrew Considine.

United did have the ball in the net through Yorke but he was flagged offside. The ball may have been going in anyway after Bebe collected a fine pass from Fletcher and shot goalwards with the rebound when Langfield blocked his initial effort. After Craig Brown introduced a few veterans to his team, Anderson pulled one back with a positive burst forward, playing a one-two with Yorke and dancing through to nudge a confident finish over the grounded Langfield.

Anderson, who had a drive saved, and Quinton Fortune had opportunities to force a draw but Aberdeen held out for victory and the sell-out crowd certainly seemed to enjoy the occasion.