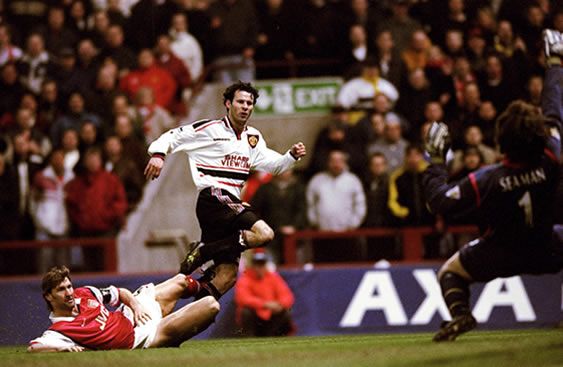 Ryan Giggs is Manchester United's record appearance-maker; he surpassed Sir Bobby Charlton's 758 senior caps on the night he helped the Red Devils secure a third European Cup triumph - his second - in Moscow on 21 May 2008.

With 909 first-team appearances in total, the 38-year-old also boasts an impressive goalscoring record with a current haul of 163 United goals.

After signing another 12-month contract extension, Giggs will be looking to add to his tally in 2012-13, as he continues to defy the odds and turn in performances that still make the club veteran a vital part of Sir Alex Ferguson's squad.

The Welshman also holds the unique record as the only player to have scored in every season of the Premier League, since its inception in 1992. United's midfield maestro will look to maintain that record again next year, but in the meantime, GiveMeFootball brings you five of the best Giggs goals...

Undoubtedly Giggs' most iconic goal came in the FA Cup semi-final replay at Villa Park in 1999 in a barnstorming encounter with Arsenal.

Giggs had started the match on the bench, but was introduced into proceedings by Sir Alex Ferguson shortly after the hour mark; a decision which ultimately won United the game.

The Red Devils were down to 10-men in extra time following the sending off of Roy Keane, but Giggs was able to secure a sensational victory.

Following a misplaced pass from Arsenal's Patrick Vieira, Giggs picked the ball up inside his own half and charged into opposition territory at searing speed.

He first galloped past Vieira, before weaving in and out of bemused pair Lee Dixon and Martin Keown, and then smashed the ball into the roof of David Seaman's net.

Giggs was only 18 when he scored this stunning goal against Tottenham at White Hart Lane.

Dean Austin failed to deal sufficiently with a long pass, and Giggs nipped in at lightning pace to steal the ball from the Spurs defender and leave him on his behind.

Jason Cundy was then nutmegged by the Welsh wizard, who swiftly rounded an advancing Ian Walker before sliding the ball into the net from an acute angle.

Just under 18 months later, Giggs scored an almost identical goal to the one against Spurs.

This time, Queens Park Rangers were on the receiving end, with Ray Wilkins initially conceding possession to the young United winger.

Unlike the strike at White Hart Lane, however, Giggs went round rather than through the defence, but both quite brilliant mazy runs ended with the same outcome.

A European offering this time, in a game which United demonstrated their credentials on the continent against a team they had been brushed aside by on two occasions the previous season.

The home side were leading 2-1 in the dying stages, and neat work from Teddy Sheringham on the left-flank sent Giggs free on the inside.

Three touches on Giggs' trusty left foot took him inside the Juventus box, before he unleashed a ferocious drive which flew past Angelo Peruzzi at his near post.

Perhaps this strike against Benfica does not showcase Giggs' immense talent in all its glory, but it proved that the then 37-year-old still retains the attributes to perform at the highest level.

Operating in a more recently accustomed central midfield role, Giggs ensured United came from behind to secure a point in their first Champions League outing this season.

Antonio Valencia cut in from the right to find Giggs and, as the Benfica defence stood off the United veteran, he unleashed an unstoppable strike from some 20 yards into the top corner.