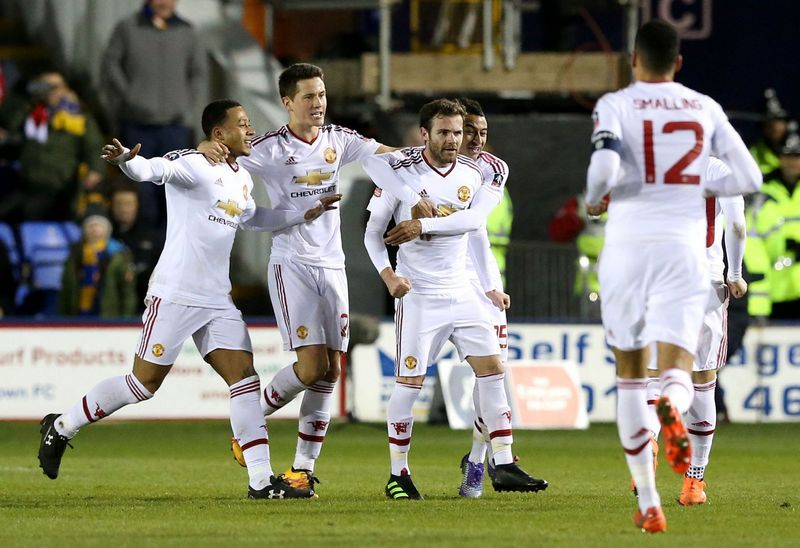 Manchester United set up an Emirates FA Cup quarter-final meeting with West Ham after comfortably seeing off Shrewsbury Town 3-0 on Monday night.
The Reds dominated the game and took a deserved lead on 37 minutes when captain-for-the-night Chris Smalling fired home, before Juan Mata doubled the advantage with a superb free-kick on the stroke of half-time. Jesse Lingard grabbed a third with just under half an hour remaining to cap a clinical performance.
Ahead of the clash, Louis van Gaal made three changes to the side that lost at Midtjylland on Thursday, with Guillermo Varela, Cameron Borthwick-Jackson and Morgan Schneiderlin all coming in to the starting line-up.
The players walked out to a huge ovation at a packed Greenhous Meadow, but United were quick to settle into the contest, and in turn settle any pre-match nerves. The first opportunity of the game fell to Smalling with just two minutes on the clock, as the defender rose unmarked in the area but could only head Daley Blind’s corner over the bar.
Having found the net in the Europa League last time out, Memphis looked eager to make his mark again in the opening stages, and twice cut in from the left before firing high into the stands. It was almost third time lucky for the Dutchman on 11 minutes, but after twisting and turning to find space in the box, his low effort was palmed away well by Shrews goalkeeper Jayson Leutwiler. 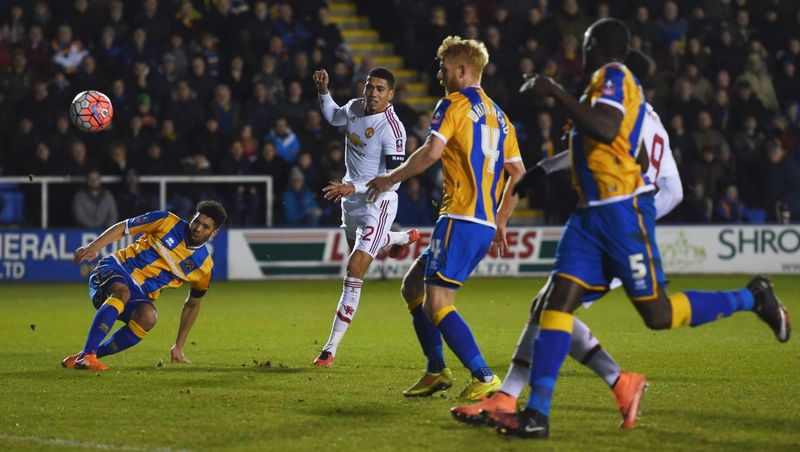 With van Gaal’s men in total control of possession, Mata went in search of an opener mid-way through the half after picking up the ball on the right, but the Spaniard’s shot deflected wide. The Reds came even closer just before the half-hour mark, when Memphis picked out Anthony Martial in the area. Leutwiler did well to get a foot to the Frenchman’s deflected strike, but the ball looped into the air and had to be cleared off the line by Abu Ogogo.
United finally made the hosts pay eight minutes before the break, as Schneiderlin nodded the ball into Smalling’s path, allowing the defender to volley into the turf and beyond Leutwiler. A second soon followed, after Martial was brought down on the edge of the area, allowing Mata to dispatch a perfectly-placed free-kick with the Shrewsbury stopper rooted to the spot. 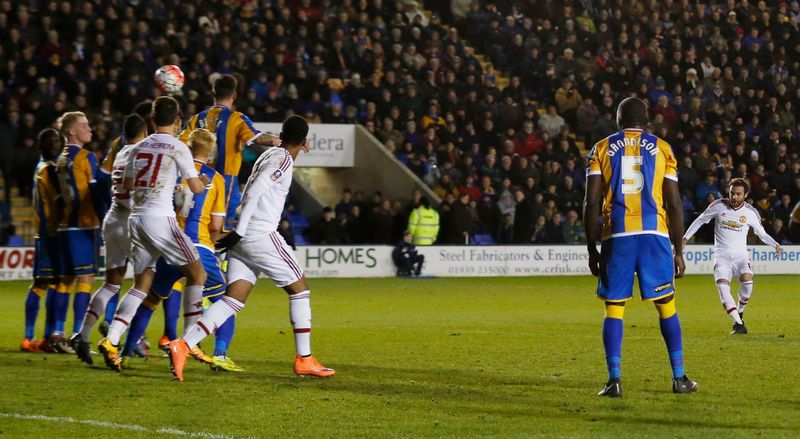 POSSESSION: Shrewsbury 21% United 79%
SHOTS: Shrewsbury 0 United 15
SHOTS ON TARGET: Shrewsbury 0 United 4
CORNERS: Shrewsbury 0 United 6
After failing to register an attempt on goal in the first 45 minutes, the home side introduced former United midfielder Larnell Cole at the interval, but the Reds continued to dictate the play. There was little in the way of goalscoring opportunities until the 54th minute, when Memphis again cut in from the left, but saw his shot drop narrowly wide with the help of a deflection. 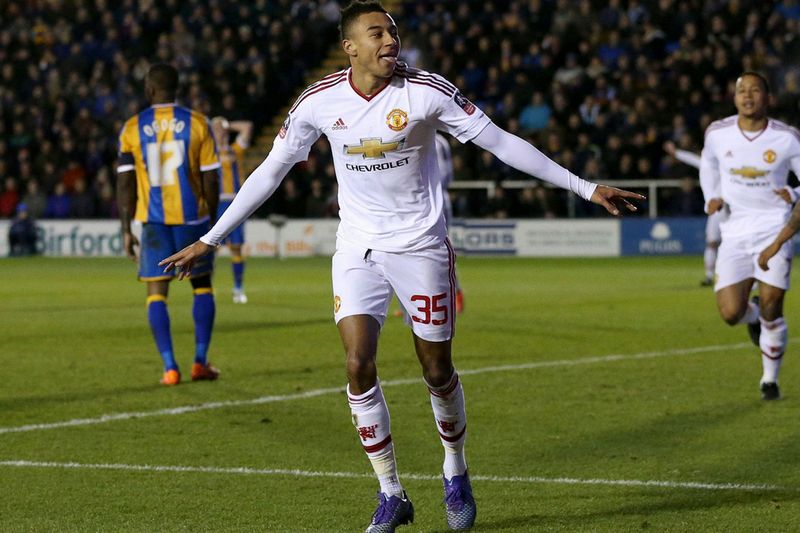 United claimed a third just after the hour-mark though, when Ander Herrera’s pin-point pass found an unmarked Lingard at the far post, and the winger slid the ball home on the half-volley to the delight of the travelling fans behind the goal. Lingard might have made it four ten minutes later, after racing through on goal, but couldn’t get the ball out of his feet and stabbed an effort just wide.
With the Reds’ progression all but sealed, Andreas Pereira and Will Keane were introduced for the final stages, and the duo almost combined to extend the lead on 74 minutes. The latter turned and fired a shot off the woodwork, but was injured in the process, leaving United with 10 men for the final quarter of an hour.
Despite the Shrews’ one-man advantage, the damage had long been done, but the home side had a final chance on 87 minutes. Agogo might have claimed a consolation when he was found in acres of space in the area, but headed wide when it seemed easier to score. Instead, Sergio Romero's clean sheet remained intact, and the Reds will now face West Ham at Old Trafford with a place at Wembley in the semi-finals at stake. 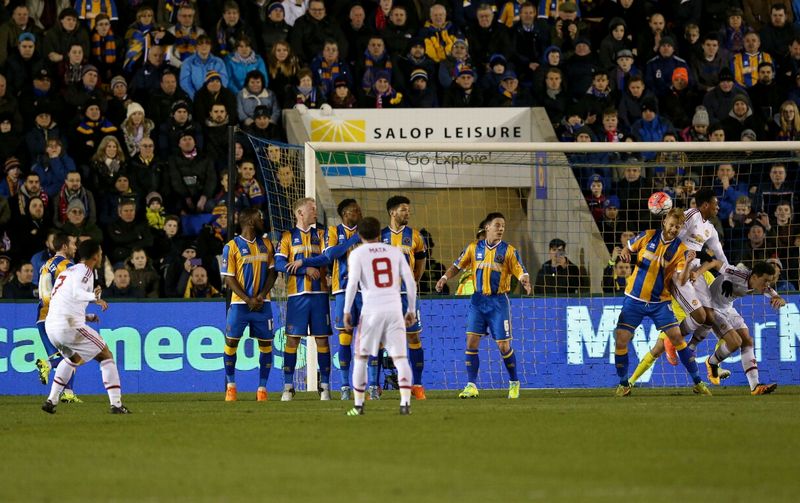 "I have to say that the first 70 minutes we were controlling the game and won every second ball and played very good. We kept the ball also and made goals – we could have scored more I think. I was very happy for the players because they were so committed to win." - Louis van Gaal

"I think it's a very special competition to play. There is a lot of history and many difficult games against sides like Shrewsbury and I think we did well from the beginning and that was key." - Juan Mata