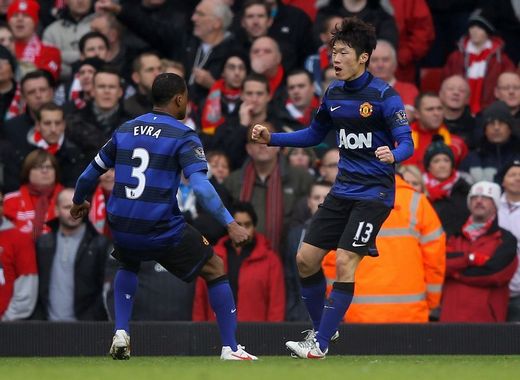 United suffered heartache at Anfield as Dirk Kuyt's 88th-minute strike knocked the Reds out of the FA Cup.

The Dutchman, sent on as a second-half substitute, collected Andy Carroll's flick-on before firing low past David De Gea to seal a berth in the fifth round.

Goals from Daniel Agger and Ji-sung Park had earlier punctuated a pulsating first 45 minutes. The second half, though, yielded little goalmouth action until Kuyt's winner; indeed, both sides appeared to have settled for a draw and an Old Trafford replay. That won't be neccesary now.

Anfield is never an easy place to visit and United's task on this clear-but-cold Saturday afternoon was rendered more difficult given the absence of Wayne Rooney, Phil Jones and Nani. The trio all picked up knocks at Arsenal last weekend, while Rio Ferdinand was deemed fit enough only for the bench.

Joining Ferdinand among the substitutes were teenagers Paul Pogba and Michael Keane, while Dimitar Berbatov and Javier Hernandez also had to be content with a place on the bench as Sir Alex turned once again to Danny Welbeck to lead the line.

But all the focus was on Patrice Evra, who, on his last visit to Anfield, was involved in an angry verbal exchange with Luis Suarez, which eventually resulted in the Liverpool forward receiving an eight-game ban for gross misconduct.

Despite the constant booing and abuse from the home fans, Evra carried himself impeccably all day and, in the early stages, linked well with Ryan Giggs. The Welshman, facing Liverpool for the 44th time in his career, had United's first chance of the afternoon but saw his volley from 20 yards saved easily by Pepe Reina.

Reina was beaten on 17 minutes when Antonio Valencia darted inside off the right touchline, made a beeline for the penalty area and let fly from the edge of the box. But the Ecuadorian's low shot cannoned off the post and out to safety, much to the agony of the Reds' vocal travelling support.

That support was silenced four minutes later when Liverpool took the lead through Daniel Agger. David De Gea, starting in goal for the first time since New  Year's Eve, couldn't fight his way past Andy Carroll in order to claim Steven Gerrard's corner so could only watch, stranded, as Agger rose to head home from six yards.

The goal didn't dent the Reds' confidence, though, and Sir Alex's men enjoyed long spells of possession in Liverpool's half before restoring parity just before the break. Rafael, who defended superbly all afternoon, scampered down the right flank and skipped past a challenge before cutting the ball back from the goal-line. There waiting, 12 yards from goal, was Ji-Sung Park, who pulled the trigger first time to fire United level.

It was well deserved and came at the end of a half in which both teams had enjoyed bright spells and yet neither could claim to have dominated. The break afforded time for reflection and it should be noted that, despite the intense rivalry between the sides and the hype surrounding the fixture, the match was played in a sporting spirit, with barely a bad tackle made nor a heated word exchanged.

When play resumed following the interval, United looked more threatening and even had a half-hearted penalty appeal for handball turned down after first Giggs and then Valencia played searching balls across the six-yard box.

Liverpool then had their own complaints on 56 minutes when Chris Smalling scuffed his clearance and, while on the ground, the ball bounced onto the defender's hand. Referee Mark Halsey didn't bite, though, and within a minute home fans' hearts were in mouths as Danny Welbeck beat Pepe Reina to a through ball and rounded the Liverpool goalkeeper. Martin Skrtel recovered swiftly to snuff out the danger, but it was another reminder – if, indeed, we needed one after his recent performances – of Welbeck's pace and predatory instinct.

Kenny Dalglish made a double substitution – Kuyt and Adam on, Carragher and Maxi off – and the switch helped the home side gain more control of the midfield. Captain Steven Gerrard tested De Gea with a free-kick and then a long looping shot, but the goalkeeper was equal to both tests and Gerrard soon made way for Craig Bellamy.

Sir Alex, meanwhile, waited until the 76th minute to make his first change, Javier Hernandez coming on for Paul Scholes to bolster the Reds' attack. The Mexican made a nuisance of himself almost immediately, harrying Liverpool's defenders and constantly lurking on the shoulder of the last man.

He couldn't help engineer a winner, though. That honour was left to another substitute, Kuyt blasting in the winner with just two minutes remaining.

And while Kenny Dalglish's men can celebrate beating both Manchester clubs at home in the space of four days, the Reds from Old Trafford must now regroup in readiness for Stoke City's visit on Tuesday and the continuing tilt at title number 20.

David De Gea
Left exposed for Kuyt's late winner but was somewhat stranded in no-man's land for Liverpool's opener. Made a top save early on but also endured a few nervy moments.

Chris Smalling
Remained calm throughout, mopped up well and cleared a number of Liverpool crosses into the penalty area. Survived a handball appeal that would have been harsh had it been given.

Jonny Evans
Andy Carroll 's no easy man to mark and Evans did well to limit the striker's influence. Jonny often relishes a physical challenge and at Anfield looked comfortable as he went about his business.

Patrice Evra
Booed all afternoon by the home fans, Evra rose above the abuse but will be disappointed to have been caught too far forward for Kuyt's winner.

Michael Carrick
Deployed further forward than his usual holding role, Carrick tackled well and dictated much of United's passing in the first half. His influence diminished after the break when Liverpool packed the middle of the park.

Paul Scholes
Sat deep and collected the ball from the Reds' defenders before distributing with his usual precision. Kept possession well but tired, understandably, as the game wore on.

Ryan Giggs
Saw plenty of the ball in the early stages and was involved in an intriguing battle with Martin Kelly on the left flank. More influential in the wide role than when he moved into the middle.

Antonio Valencia
Strikes fear into full-backs and was at his most dangerous when he had the ball at his feet and took a direct approach to goal. Hit the woodwork in a lively first period.

Danny Welbeck
Charged with leading the line, Welbeck worked tirelessly but was often bereft of quality service. His goal attemps were restricted to speculative efforts from distance.

Ji-sung Park
Scored the Reds' equaliser with a top first-time finish but impressed throughout with his industry. Tackled well, tracked back and carried the ball forward when gaps appeared.

Javier Hernandez (on for Scholes, 76)
Unsettled Liverpool's back four with his pace but never earned a clear sight of goal.

Dimitar Berbatov (on for Giggs, 89)
Not on long enough to make an impact.