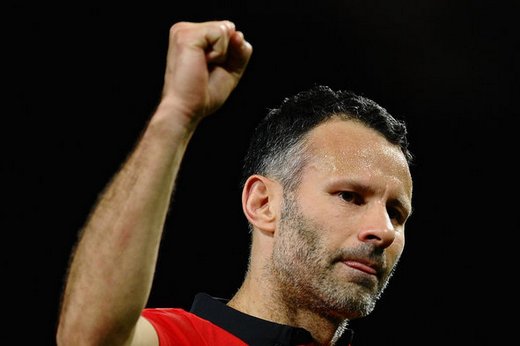 The 40-year-old, making his first start since the last week of January, had a hand in two of Robin van Persie's three goals as United wiped out a 2-0 first-leg deficit to win 3-0 and book their place in Friday's Champions League quarter-final draw.

Rumours of a rift between the duo were denied over the weekend in the aftermath of United's 3-0 home defeat by Liverpool and Moyes admits he had no hesitation in throwing the winger in against the Greeks at Old Trafford.

Giggs, who became the oldest player to appear in the knockout stages of the competition, gave a vintage performance, his pinpoint pass leading to the opening penalty before freeing Wayne Rooney to set up the Dutchman for United's second.

"I felt at 40 that I needed to look to the future and give other people a chance," said Moyes. "But after Sunday's result I thought tactically I needed him to carry out a certain role against Olympiakos which he knew and did perfectly well.

"We all know how difficult it is to be out of a team and come back in," he said. "It would probably take us four or five games to get going but not for him.

"I think him being in the team energised everyone else around him. Every season you think it must be his last, but in February/March/April he starts putting in performances like this and you think that's another year and another contract is coming.

"Why hasn't he played him? When he puts in a performance like that you've got to then ask."

"It was always going to be tough not to concede a goal once you score three goals but we managed it and with the help of the crowd, we got over the finishing line," he said.

"Of course there's pressure, especially after Sunday - a disappointing performance and result. We owed the fans this result because they were unbelievable."

Giggs hopes this victory can be a turning point in United's disappointing season.

He added: "We've had good performances and good results but not followed it up. That's what we've got to do now. Not get carried away. We've just got to carry on with performances like today.""I thought he was fantastic tonight, he really was. The passes he made for the two goals were fantastic, as was his general play and more importantly his general fitness. He's something different.

"But Ryan can't go on for ever and we have to look to see what we do, we know that. We have to be looking to find the new Ryan Giggs and the new players."

Sky Sports pundit Jamie Carragher insists Giggs' return gave the entire United side a boost, but questioned why Moyes had persisted in leaving him out of the team at such a vital period of the season.