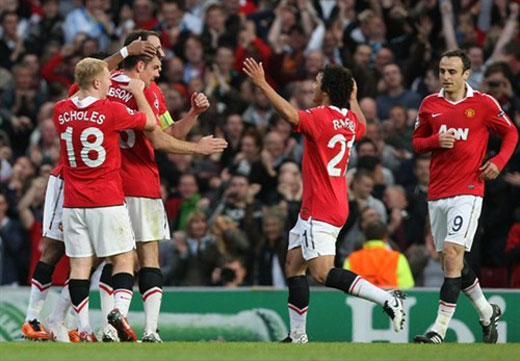 United turned on the style to make absolutely certain of a place in the 2011 Champions League final, firing four goals past Schalke in an enthralling semi-final second leg at Old Trafford.

Antonio Valencia and Darron Gibson put the Reds well and truly in the driving seat with two first-half strikes and although Jurado pulled a stunning goal back for Schalke, also before the break, Sir Alex Ferguson's double chasers went on to win comfortably thanks to a second-half brace from the outstanding Anderson.

To single out the South American or any of the triumphant United stars would be misleading, however - this was another tremendous team effort with fourteen players making a contribution to the cause and perhaps giving their manager some more selection dilemmas in the exciting days and weeks ahead.

Sir Alex Ferguson stayed true to his word and made changes – eight, in fact, from the side that slipped up at Arsenal. Only Edwin van der Sar, Anderson and Nani were asked to start again as the boss picked a side with Sunday against Chelsea in mind. Wayne Rooney, reported to have a tight hamstring on Tuesday, was out of the eighteen altogether but his now-regular strike partner Javier Hernandez was named among a strong group of substitutes.

There was a subdued start to the match, with the atmosphere nothing like as electric as it was for the last semi-final second leg to be staged at Old Trafford – against Barcelona in 2008. The circumstances here were very different of course, with the cushion of two away goals blunting any edge this contest might have had.

Only a couple of flashes from the opposite number 17s gave the crowd something to get excited about in the opening 10 minutes – Nani using some great close control to surge between two Schalke players and win a corner; then Jefferson Farfan firing the first shot of note inches wide as van der Sar dived right to monitor its flight.

Farfan’s right boot also caused Darron Gibson some discomfort in his midriff when the latter crunched into a challenge on the Peruvian international. When play resumed, with Gibson happily not requiring the attending stretcher, Berbatov threatened to reprise his West Ham party-piece of last season with a drag-back close to the left-hand byline. Only the alertness of Manuel Neuer, United’s first-half nemesis from the first leg in Germany, prevented the Bulgarian’s low ball locating Antonio Valencia.

There was no such intervention when the latter was picked out again in the 26th minute. Japanese right-back Atsuto Uchida lost possession as Schalke tried to press forward and he was punished instantly, as Gibson received the ball from Anderson and delivered the perfect sliderule pass into Valencia’s path. The Ecuadorian barely broke stride as he slipped the ball under Neuer to notch United’s third goal of the tie, and his third strike of the season.

The goalscorer and provider swopped roles as the Reds swiftly doubled the advantage on the night. Anderson was again their accomplice, receiving a throw-in to his feet inside the area and flicking it on. One touch from Valencia forwarded the ball to Gibson who struck it first time into the net via Neuer’s leg and the right-hand post. The seemingly superhuman goalkeeper of last week had been made to look very ordinary.

United were now 4-0 up on aggregate - and cruising? We thought so until a moment later when Schalke pulled a goal back in spectacular style. Smalling’s attempt to play out from the back was cut out and when Uchida’s right-wing cross careered off the pack of Evans, Rafael and Raul, Jose Manuel Jurado hammered the ball past van der Sar with his venomous left foot.

The Old Trafford crowd, now illuminated by a couple of red flares in the Schalke section, had witnessed a goal rush and three almost became four when Valencia’s effort was cleared off the line by centre-back Benedikt Howedes with Neuer beaten.

While the German side still had a tall order in terms of the tie, they had at least made a fist of it on the evening. But while a couple of Schalke free-kicks and a flurry of bookings for Anderson, Scholes and Gibson, threatened to further loosen United’s grip on the game, the Reds were worthy 2-1 leaders at the interval.

Schalke sent on their first sub for the restart, replacing attacking midfielder Alexander Baumjohann with the Brazilian striker Edu. But it was an Edu compatriot in red who nearly added to the scoreline when the irrepressible Anderson was teed up by Berbatov. United's number eight would surely have scored past most keepers with his curling left-footer but Neuer, suddenly back to his best, flew to his left and flicked the shot wide with his top hand, his right.

With an hour gone, and the 4-1 lead not under any apparent threat, the United fans serenaded their heroes past - Andy Cole, Nicky Butt et al - and present, and began to sing of Wembley. The repertoire was only interrupted by a roar for Anderson's eventual goal - tucked low to Neuer's left after a great run and cut-back by Nani - and by greetings for Patrice Evra and Darren Fletcher when they joined in the fun as substitutes for Rafael and Paul Scholes.

Then came another strike for Anderson - United's fourth goal on the night, sixth on aggregate - when Valencia broke down the right, fed Berbatov, and the Bulgarian - in his last action before making way for Michael Owen - slid the ball to the Brazilian for a first-time finish at the far post.

There was still time for excellent saves at both ends - Neuer denying Owen, and van der Sar thwarting Edu, with substitute Klaas-Jan Huntelaar flagged offside after popping in the rebound - but any more goals would have almost spoiled a sated crowd already relishing a Saturday-night date with Barcelona on May 28. Bring it on.

Edwin van der Sar
Nowhere near as busy as his opposite number Manuel Neuer over the two legs, but showed his youthful agility to make a great save from Edu late on (albeit with the offside Huntelaar popping in the rebound).

Rafael
It was a typically tenacious display from the right-back. He understandably tired in the second half, having missed the previous seven games.

Chris Smalling
He relished the challenge of taming the Champions League’s all-time top scorer Raul. Gave the ball away for Schalke’s goal but otherwise had a decent game as the defence’s main lynchpin.

Jonny Evans
Strong in the tackle and decisive in the air, the Northern Ireland international looked sharp for someone making only his second start since being sent off in mid-March.

John O’Shea
Captaining the side at left-back, the Irishman nullified the threat of Farfan and sometimes presented an attacking threat of his own with some decent crosses.

Anderson
This was an outstanding performance by the Brazilian, even without the two second-half goals that doubled his career tally for the Reds. Only denied a hat-trick by a stunning Neuer save.

Paul Scholes
The oldest outfield player in United’s ranks pulled the strings in a more subtle way than the effervescent Anderson. He lived dangerously with some of his tackles.

Darron Gibson
After shrugging off what looked a match-ending blow to his midriff, Gibson played a big part in this victory. Set up Valencia’s opener with an inch-perfect pass before grabbing the second goal with an assured strike.

Antonio Valencia
Great to see him on the scoresheet in a European tie, eight months after he was seriously injured in another Chamnpions League game at OT (Rangers). He later reverted to type, assisting Gibson’s goal and playing a part in Anderson’s second.

Dimitar Berbatov
The Bulgarian busily led the line in his first start since the Manchester City defeat at Wembley. He played the final pass for United’s final goal, converted by Anderson.

Nani
The Portuguese winger roused the crowd with a brilliant bit of skill to run between two Schalke bodies early on. Playing on the left of a front three, he popped up on the right to cut the ball back for Anderson’s first goal, United’s third.

Patrice Evra (for Rafael, 60 mins)
The Frenchman almost left the fray moments after joining it, but a kick couldn’t keep Patrice out of the party. With the game won, he enjoyed getting forward.

Darren Fletcher (for Scholes, 73 mins)
The returning midfielder didn’t quite get the 45 minutes he was hoping for, but it was still a happier semi-final appearance than his last one (red card vs Arsenal in 2009).

Michael Owen (for Berbatov, 77 mins)
The striker is dreaming of a Wembley winner and he could have had a European goal at Old Trafford had it not been for the last of many Neuer saves in this semi-final.