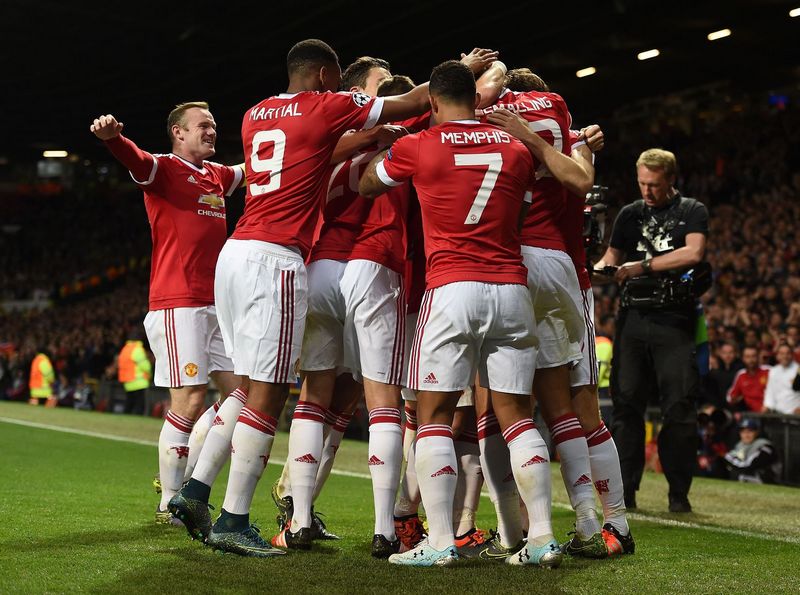 Manchester United returned to winning ways in the Champions League on Wednesday as goals from Juan Mata and Chris Smalling secured an invaluable 2-1 comeback victory over Wolfsburg.
The Reds had lost the opening Group B match at PSV Eindhoven earlier this month and, as a result, needed a positive result on matchday two at Old Trafford ahead of a potentially difficult trip to CSKA Moscow, who bagged an impressive 3-2 triumph over the Dutch champions elsewhere in Russia. 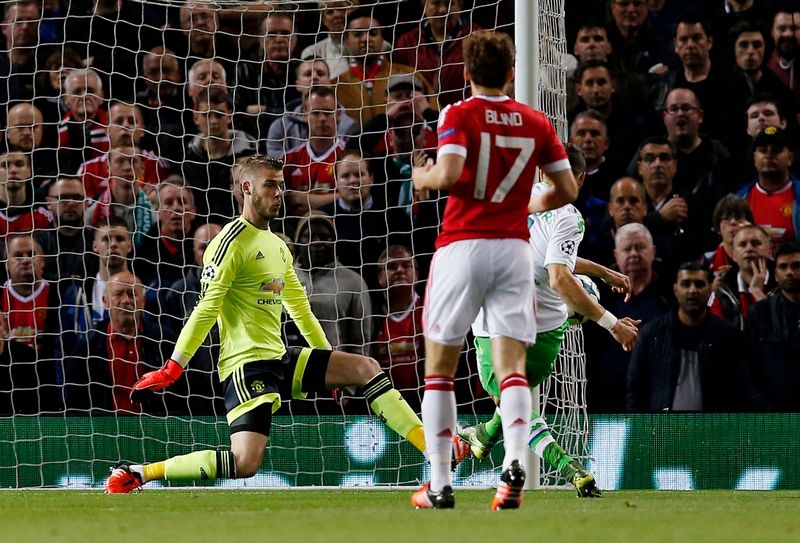 Although the importance of this match was emphasised by Louis van Gaal ahead of kick-off, United made a disappointing start and fell behind to Daniel Caligiuri’s goal in the fourth minute after the German-born Italian dribbled down the right flank to exchange passes inside the penalty box before finishing past David De Gea with aplomb, much to the delight of the continuously vocal travelling fans in the away end.
United responded well and Bastian Schweinsteiger hit a speculative half-volley at an open goal just moments later following a dodgy clearance from goalkeeper Diego Benaglio, before Mata’s curling effort was headed over by the physically imposing former Bayern Munich defender Dante. Anthony Martial then went close with a mazy run from the right that led to the Frenchman firing just off target.
The visiting Germans appeared to be content with their early lead and understandably held a deep defensive line for much of the first half, essentially asking what United had got in attack. An answer was almost given in the 25th minute when Martial superbly got to the byline and found Wayne Rooney with a driven pass across the area, though the captain blazed his shot over the bar from around six yards. Memphis was then frustrated as his header from Mata’s superb pass was saved by the goalkeeper. 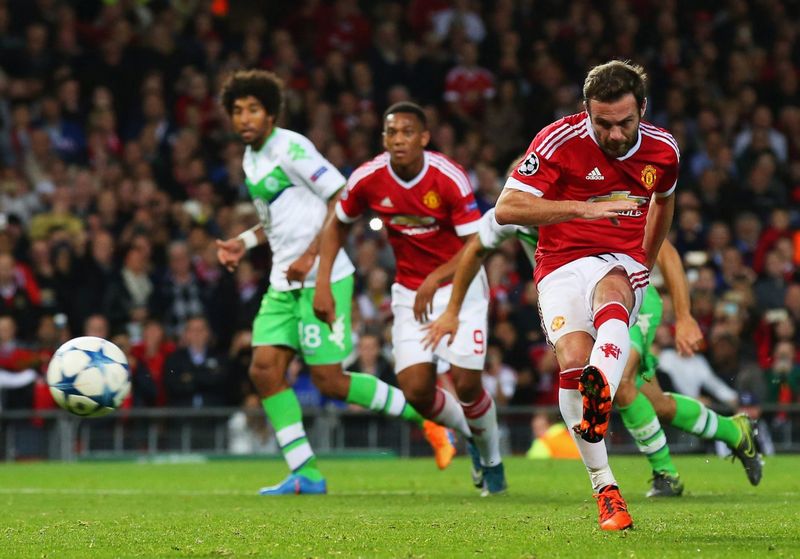 The Spaniard was quickly celebrating, however, after his cross was handled inside the area by Caligiuri and United were rightfully awarded a penalty in front of the East Stand, which our no.8 calmly stroked into the bottom corner to inspire scenes of great relief and ecstasy at Old Trafford. The mood was only dampened slightly by the sight of yellows cards for Morgan Schneiderlin and Schweinsteiger for separate fouls on Maximilian Arnold, just before the half-time break.

Possession: United 61% Wolfsburg 39%
Shots at goal: United  11 Wolfsburg 2
Shots on target: United 4 Wolfsburg 1
Corners: United 2 Wolfsburg 0
Van Gaal intervened during the interval by replacing right-back Antonio Valencia with Ashley Young, who had previously made a positive impact as a substitute this season, and United swiftly took the lead through an unlikely source when Smalling latched onto Mata’s superb backheel to prod home at the back post on 53 minutes, notching his 10th career goal for the Reds in the process. 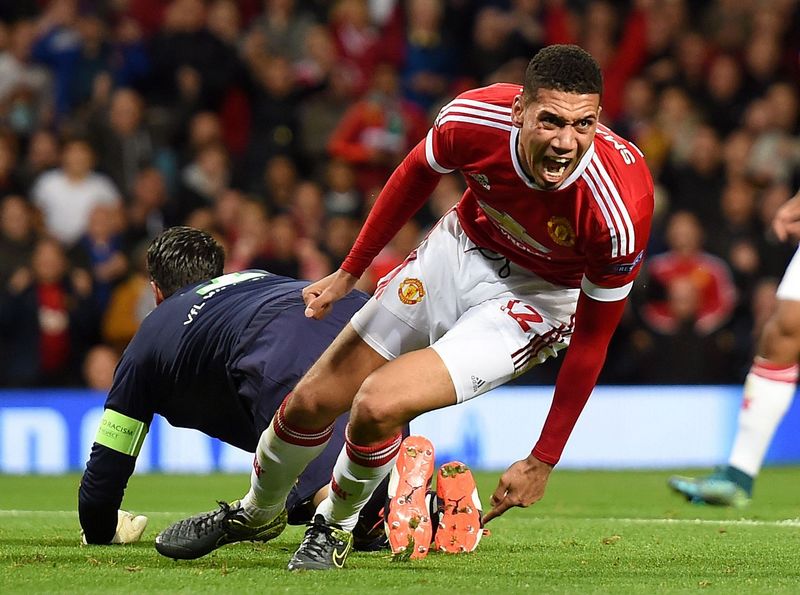 Andreas Pereira excelled on his first competitive start against Ipswich Town a week earlier and the young Brazilian entered the fray just after the hour mark, taking the place of Memphis after the Dutchman was perhaps unfairly booked for apparently catching Christian Trasch with a flailing arm.
Wolfsburg made their own changes on 70 minutes by introducing Andre Schurrle and Nicolas Bendtner, two players who are both familiar to United fans as a result of their previous spells in the Premier League with Chelsea and Arsenal. The former almost scored with one of his first touches, too, after dragging a low shot from the right flank just wide of De Gea’s post.
Chances were ultimately few and far between in the closing stages as United looked to consolidate the advantage and a potentially crucial victory, basically by dropping deeper and soaking up all pressure that Wolfsburg tried to apply in the final third. This led to a nervous finale at Old Trafford and, in truth, the Germans looked like the team more likely to score as the clock ticked towards full-time.
Schneiderlin could and perhaps should have been sent off for a second bookable offence following a foul on Julian Draxler, which led to Ricardo Rodriguez curling a powerful free-kick inches wide on 85 minutes. That proved to be the final opportunity and United held on to claim three important Group B points. 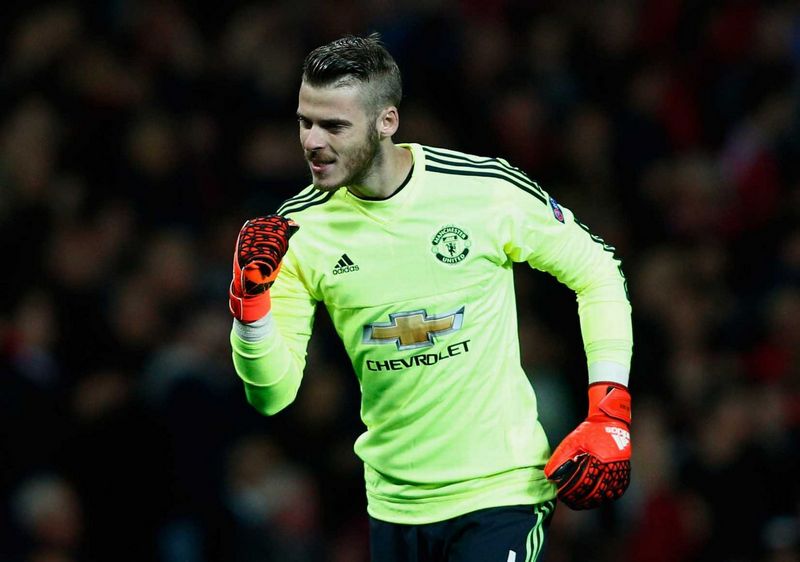 #MUFC returned to winning ways in the Champions League on Wednesday as goals from Juan Mata and Chris Smalling secured an invaluable 2-1 comeback victory over Wolfsburg.

Posted by RyanGiggs.cc on Wednesday, September 30, 2015