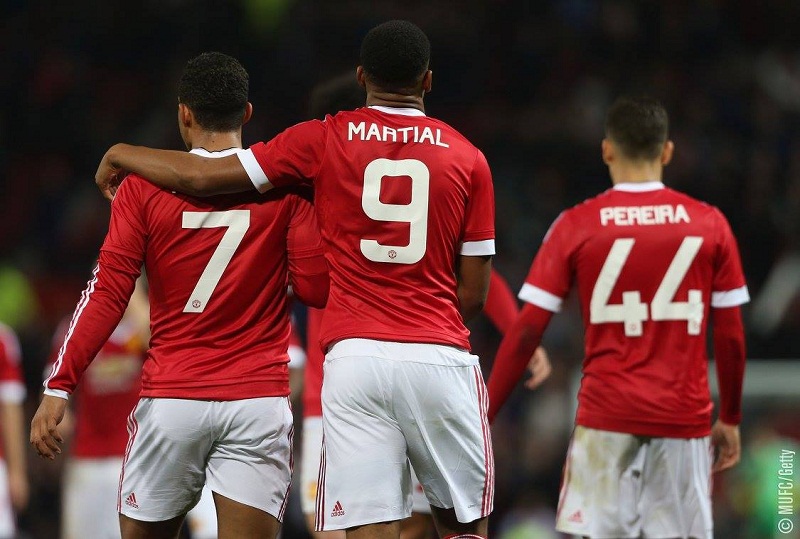 Manchester United cruised into the fourth round of the Capital One Cup after seeing off the challenge of Ipswich Town at Old Trafford with a 3-0 victory.
After falling at the second-round hurdle to MK Dons last season, the Reds, entering a stage later this term thanks to Champions League qualification, progressed with ease against the Championship outfit thanks to goals from Wayne Rooney, Andreas Pereira, who netted his first senior goal for the Reds, and substitute Anthony Martial.
Following last season’s shock exit in Buckinghamshire, van Gaal opted for a strong first XI, which included a first start for Pereira, who lined up on the left in front of stand-in left-back Ashley Young. Ipswich boss Mick McCarthy, meanwhile, rang the changes as he named a completely different side to the one that drew 1-1 at home to Birmingham last weekend.
The Reds and Pereira almost made the perfect start two minutes in when the ball dropped to the wide man from a Mata free-kick. He smashed an effort against a post but the flag had already gone up for offside against Ander Herrera. Soon after, Pereira took aim from 25 yards but Bartosz Bialkowski did well to hold on to the well-struck drive. 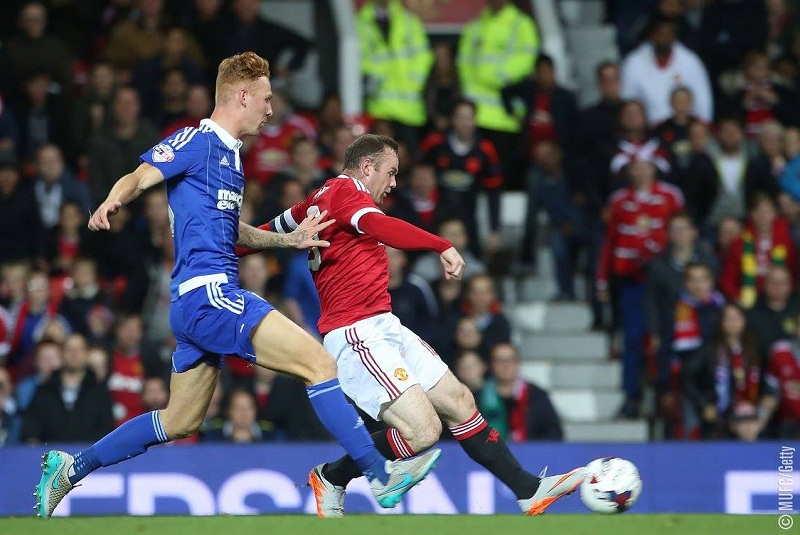 Backed by large travelling support, believed to be around 5,500, Ipswich seemed content to let United have the ball. Possession has not been a problem for the Reds this term, but turning that domination into goals has at times. Thankfully, 23 minutes in, United made it count as Rooney put the hosts ahead. A long ball forward from Daley Blind was brilliantly controlled by the skipper who saw off the challenge of a defender before finishing with aplomb with his left foot. 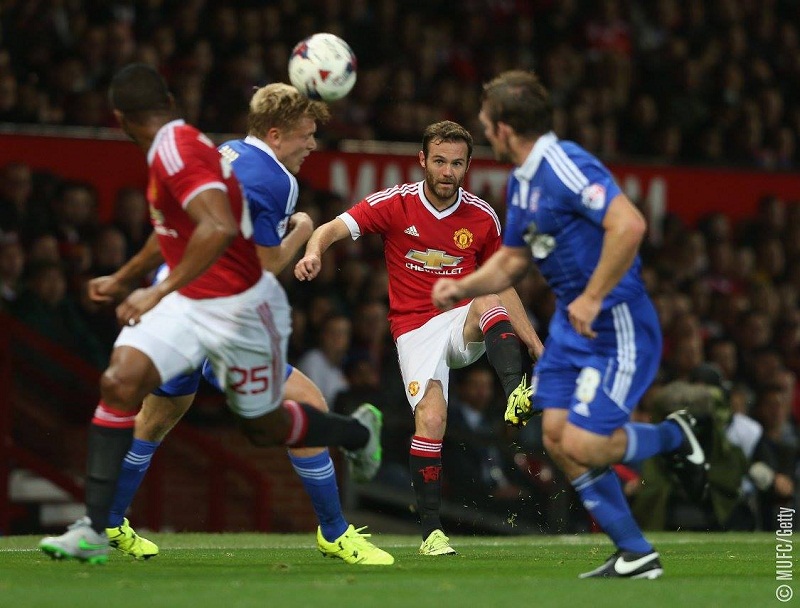 A neat link-up between Marouane Fellaini and Juan Mata on the edge of the box forced Bialkowski to make a decent save from Mata’s outside-of-the-boot strike six minutes later, while the only effort of any note from the visitors came on the stroke of half-time when Tommy Oar flashed a shot just wide of David De Gea’s right-hand post.

Possession: United 75% Ipswich 25%
Shots: United 6 Ipswich 2
Shots on target: United 3 Ipswich 0
Corners: United 0 Ipswich 2
Ipswich seemed like a different team at the start of the second period, the first five minutes of which they dominated. They pressured the ball and threw a couple of dangerous crosses into the box from the off, but United’s defence were up to the job.
Indeed, it didn’t take long for the Reds to get a grip back on the game and Antonio Valencia, in at right-back in place of Matteo Darmian, blasted a low drive at Bialkowski who punched it into the air and was relieved to see one of his defenders hook it clear. 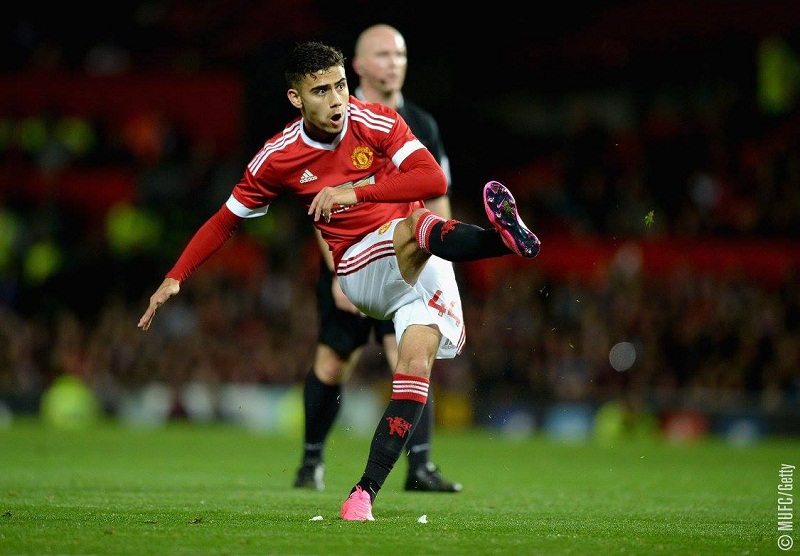 There was nothing the Ipswich stopper could do about Pereira’s superb free-kick on the hour-mark though as the youngster netted his first senior goal in sublime fashion, curling home from 25 yards in front of the Stretford End.
Mata was next to have a go from distance, letting fly with a left-foot shot from 25 yards, but Bialkowski was there to tip it over. That was to be one of Mata’s last pieces of action with the Spaniard replaced by Martial and Phil Jones also coming on, for his first appearance of the season, in place of Chris Smalling.
Martial got into the action straight away and, two minutes after coming on, fired just wide after being set up by Rooney. 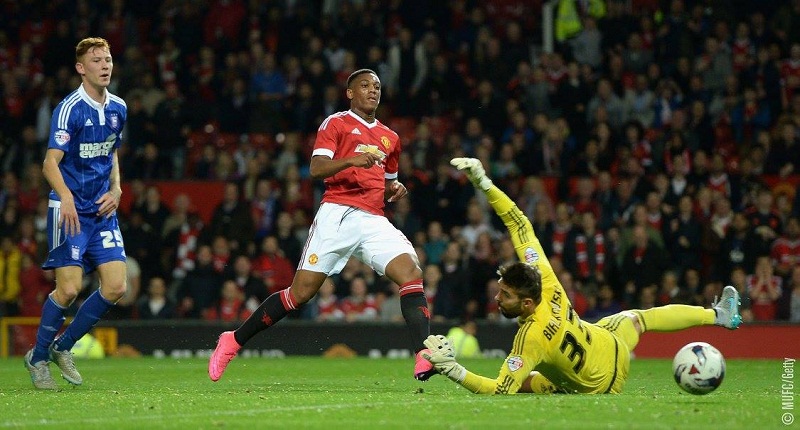 Pereira went close to netting his second of the night four minutes from time when his close-range shot was well saved, but the Ipswich keeper couldn't keep out United's man of the moment as Martial took a chested pass from fellow substitute Memphis in his stride and coolly slotted home in injury-time as the Reds deservedly booked a place in the fourth round of the Capital One Cup.

VAN GAAL REACTION
"The result was great. We don’t have injuries. I brought in players, I rotated players. Phil Jones has played a lot of minutes. So I’m a happy coach."

PEREIRA REACTION
"It’s very special for me to score my first goal, a free-kick at the Stretford End as well. It’s just like a dream come true."

"The result was great - I'm a happy coach."Get more reaction from Louis van Gaal - http://bit.ly/1KC4GRu - and check out the best pics from United's 3-0 win over Ipswich...