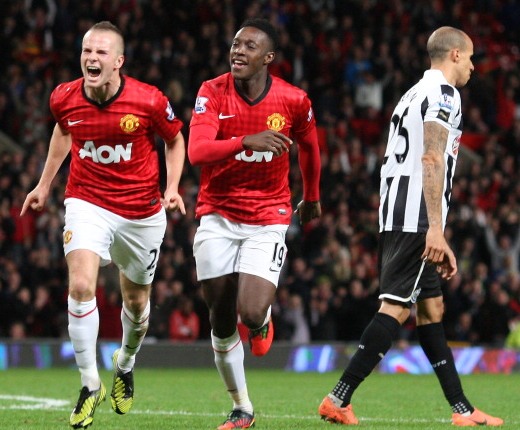 United progressed to the fourth round of the Capital One Cup with an entertaining 2-1 success against Newcastle thanks to goals from midfielders Anderson and Tom Cleverley.

Brazilian Anderson, with the spotlight on him this evening, contributed a brilliant opener before Cleverley atoned for spurning a glaring chance by opening his goalscoring account for the club at senior level. Papiss Cisse, whose introduction as a substitute added a cutting edge for the Magpies, pulled one back and was only denied an equaliser by the woodwork.

One of many plus points on the night was the return of Wayne Rooney after his leg injury, with the Reds' No10 excelling after dropping deeper midway through the first half. Hopefully, the Merseysider will be available for the weekend clash with Tottenham after coming off with 15 minutes remaining.

Despite fielding a very inexperienced back four, with only one Barclays Premier League appearance between them, the Reds made a promising start. Left-back Alexander Büttner, the man with that sole league outing to his name, cracked a decent attempt off target in only the third minute.

Marnick Vermijl, one of four debutants overall, showed his quality with an inviting cross that skimmed Javier Hernandez’s head and drifted away from goal. Although the visitors responded with Dan Gosling miscuing  a good opening created by Shola Ameobi’s headed lay-off, most of the pressure continued to come from Sir Alex’s side. There was a shout to keep the run of penalties going when Rooney tumbled under a challenge from James Tavernier but referee Anthony Taylor was right to wave 'play on'.

Keeper Rob Elliot produced a superb save to push away an Anderson drive after the Brazilian drove through the heart of the defence by linking with Tom Cleverley. At the other end, the youthful defence backtracked when the impressive Tavernier made in-roads but the full-back dragged his shot wide of David De Gea’s right-hand post, whilst firing a warning of intent.

Rooney's move further back was a bid to gain more control as Sir Alex switched to more of a 4-4-2 with Danny Welbeck joining Hernandez in attack. The tactical ploy almost reaped dividends when Rooney’s exquisite pass released Welbeck but the striker’s powerful shot again extended the alert Elliot.

The deadlock really should have been broken as the clock ticked into the 35th minute. Hernandez skipped past Fabricio Coloccini’s lunging tackle and picked up the loose ball following a touch by Welbeck to instantly put Cleverley in the clear. With the whole of Old Trafford expecting the net to bulge, the England international instead fired wide of the inviting target.

However, the Reds still broke through before half time courtesy of a sublime strike by Anderson. The Brazilian collected a pass infield by Darren Fletcher and worked an opening onto his favoured left foot before unleashing a spectacular finish that flew in off the inside of the Elliot’s right-hand post.

It was a goal of genuine quality and lifted the crowd ahead of the second period with both sides going on the attack after re-emerging from the dressing rooms. Anderson skied an opening after he and Rooney produced fine passes in a build-up that set Welbeck away down the left while Hernandez sent a downward header wide from Vermijl’s cross.

Newcastle had opportunities of their own, through Mike Williamson and Shola Ameobi, before Haris Vuckic was unlucky with a curling effort after neatly side-stepping Michael Keane. But it was a move with menace from United that produced the first Reds goal in front of the Stretford End this season. Rooney was heavily involved and Welbeck passed inside to Cleverley, who calmly steered wide of Elliot before celebrating with a mixture of relief and delight.

Rooney, revelling in his deeper role, bent a shot over the bar but the hosts were caught out when Alan Pardew’s substitutes Shane Ferguson and Cisse had an immediate impact just past the hour. Ferguson raced past Vermijl on the left and his hanging cross evaded De Gea and debut-making Scott Wootton to enable Cisse to dive and nod in.

The response was swift with Rooney’s pass feeding Hernandez but, after Williamson committed himself, the Mexican lifted his finish against the bar. Anderson lashed a deflected shot off target and Keane almost got on the end of the corner as United hunted a killer third goal. Although the Tynesiders went close when Gosling latched onto a Vermijl clearance, Sir Alex reshuffled his pack with Nick Powell and another debutant, Ryan Tunnicliffe, replacing Rooney and Vermijl.

Cisse saw a textbook overhead kick arc over De Gea but thud against the bar and it was all hands on deck with Robbie Brady becoming the fourth debutant when taking over from Büttner after the Dutchman received a painful knock. Gosling prodded one half-chance through to De Gea but the Spaniard and his young defence held firm to register victory from an enjoyable cup tie which was a fine advertisement for the competition.