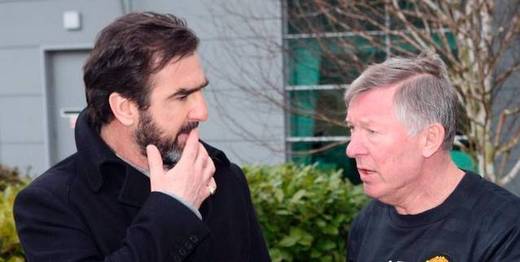 The Frenchman will coach New York Cosmos for the match on August 5th after taking the helm at the American side, who are currently bidding to gain admittance to Major League Soccer, earlier this year.

Although a decent crowd could have been anticipated anyway to mark Scholes' retirement, which was announced in the wake of Manchester United's UEFA Champions League final defeat to Barcelona last month, Cantona's presence will only fuel interest further.

The charismatic striker is regarded as one of the most significant figures in the club's entire history, proving to be the catalyst for United's emergence as the dominant side of the Premier League era.

He quit suddenly in 1997, having won four titles and two domestic doubles in his five seasons at Old Trafford.

"I wish to congratulate Paul for such an incredible career at Manchester United and I am looking forward to returning to Old Trafford in my new role with the New York Cosmos," said Cantona, who recently celebrated his 45th birthday.

"I have spent my whole footballing life at Manchester United, so this will be an emotional farewell," said Scholes.

"This club is special in many ways but the fans are the best and I have always appreciated their support throughout my career.

"I hope they enjoy the night, especially seeing the Boss and Eric battling it out in front of the dug outs."

Scholes has committed himself to a coaching career at Old Trafford, having marked the end of his playing days, during which he secured 10 league titles, a figure second only to Ryan Giggs.

He is widely acknowledged to be one of the finest English players of his generation, with Sir Alex Ferguson all the more appreciative because Scholes turned his back on the celebrity lifestyle so many of his contemporaries revel in.

"Paul's retirement was typical of the man, low key, he was safe on holiday just so he could avoid any media interviews," said Ferguson.

"However he won't be able to hide away this time and it will be fantastic for the fans to be able to bid farewell to this exceptional footballer.

"Now from one great player to another, Eric Cantona. I am going to relish this touchline showdown, one Gaelic mind to another.

"Neither of us will want to lose this one, it is sure to be a great night and a well deserved recognition for Paul."

Brazilian superstar Pele will also be in attendance in his role as Cosmos honorary president after playing for the team during their previous incarnation, when they attracted superstar names from all over the world.